Sign in  |  Create a Rediffmail account
Rediff.com  » News » These little AIDS orphans have a reason to smile

These little AIDS orphans have a reason to smile 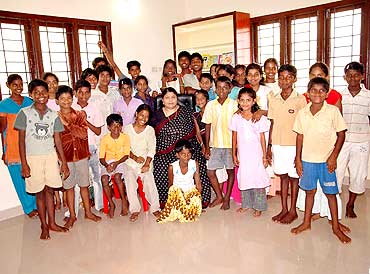 For little orphans, who are inflicted with HIV+, life in itself is no less than an obstacle. But thanks to people like Dr Manorama, who has been selflessly working for their welfare for a more than a decade now, hope blooms in those insecure hearts. Rediff.com's Shobha Warrier visits Dr Manorama's newly created home for these little angels -- Ananda Illam.

At that time, there were only a handful of children under her care, and they were housed on the first floor of her house. When the children played outside, which was quite rare, the other residents ran away and complained that the children should not be let out, as they feared their children getting AIDS from the little ones.

It wasn't an easy start 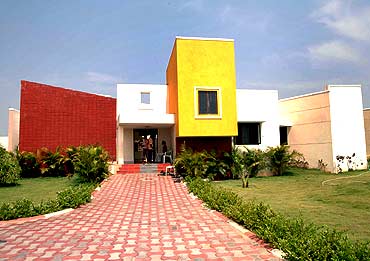 In the last fifteen years, Dr Manorama had to shift the children to several houses, as they faced obstacles everywhere. But the number of children under her care grew.

Along with this stigma, her private practice as a doctor had also stopped and the clinic was abandoned, as her patients stopped coming to the clinic that treated HIV+ people and sex workers. One of her staff, who worked as a caterer, lost his work when people came to know that he volunteered to work with HIV+ people.

A lot of water has flown under the bridge in the last fifteen years. "Stigma is definitely reduced. Earlier, we were even scared to utter the word 'AIDS'; but today, there is a lot of change in the attitude of people and the society, thanks to the efforts of the Tamil Nadu government, the media and the NGOs," Dr Manorama said.

Today, her children go to government schools, play volleyball and lead almost a normal life thanks to Anti Retroviral Therapy, and above all, love and care.

Life has never been the same for Ravi When Dr Manorama brought Krishnaveni and Ravi at ages five and three as HIV+ children, she was not sure how long they would live. The life span of positive children was said to be very short, and they were not expected to live beyond 12, then.

While Krishnaveni threw tantrums,  Ravi refused to talk even a word. Today, Ravi is 18 and has dreams and ambitions like any other 18-year-old. He wants to be a police officer when he grows up and make the city a better place to live.

Finally, they have their own Ananda Illam 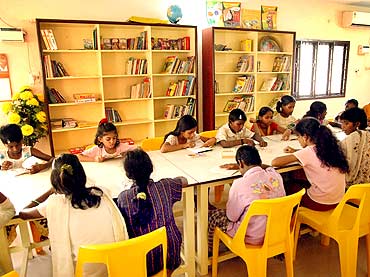 From being driven out of various houses, finally, the children have a home of their own; their own Ananda Illam, from where nobody will ask them to move. Ananda Illam may be far away from Chennai, but the sylvan surroundings make it an ideal place for the children to grow up in.

Other than the beautifully designed home, they have a van to drop them at school, an ambulance to take care of any medical emergency, a library with lots of books to read, lots of space to run around and play, a music teacher to teach them classical music and play instruments, a volleyball court, and a teacher to teach them fencing.

Life was never so good for these orphans. No wonder all the children were smiling, a far cry from what I saw them several times in the last 15 years.

'I want to be a police officer who plays drums' 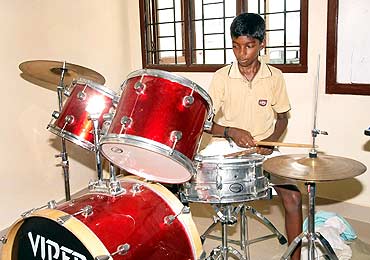 In the music class, while the children were busy singing keerthanas and identifying ragas, 12-year-old Santhosh played the western drums. He said proudly, "I love music.

It was my dream to play a musical instrument and you don't know how happy I am while playing the drums. I want to be a police officer, a police officer who plays drums!"

'I want to take care of children!' 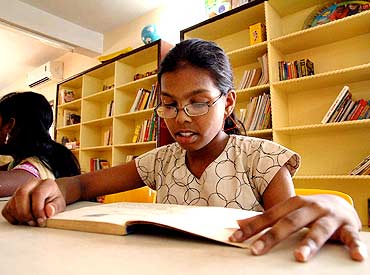 Image: Mary studies in class 8, and has her goals
Photographs: Sreeram Selvaraj

Nobody would believe that the ever smiling and bespectacled Mary when first brought to CHES cried non-stop, threw tantrums and banged her head on the floor. It was only the love and support of Muthupandian and Chitra that gave her a new lease of life.

If 14-year-old Mary is a beautiful and well-behaved teenager today, it is all because of the couple who chose to adopt her as their first daughter! She studies in the 8th standard and wants to be a doctor like Dr Manorama and take care of children! "That is my ambition. I will study hard to achieve that," she says.

A little too late.. 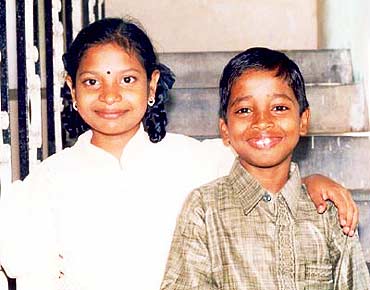 Most of her wishes would have been fulfilled, but she was not alive to enjoy the home. The only regret Dr Manorama has is, they lost Krishnaveni before ART arrived. She passed away in December 2002 without having her dreams fulfilled. 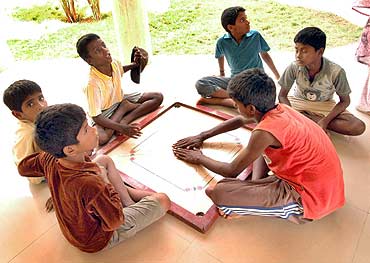 Dr Manorama recounted how Ananada Illam came into being like a miracle. "It happened in a rather unexpected way. There was a person called Ramesh Anantharam from the Emirates Airlines who came to CHES Ashram with $ 200, which his friend wanted to donate to us. But he insisted on seeing the home. As he saw the children at the Ashram, he understood how difficult it had been for us to give them a proper home.

"When he went back, he wrote about us to his boss, an Englishman, and he took it forward to the Emirates Airlines Board members.

In 2007, Dr Manorama got a call to make a proposal for a home. She was invited to Dubai to present the proposal. "We were really surprised. We thought it was a good opportunity. They did not cut out anything from our proposal, and we were given Rs 3 crores for constructing the building. Then came the bus, the ambulance, the Maruti van, air conditions in all the rooms, a generator, a big TV for children, etc."

A hostel, not an orphanage 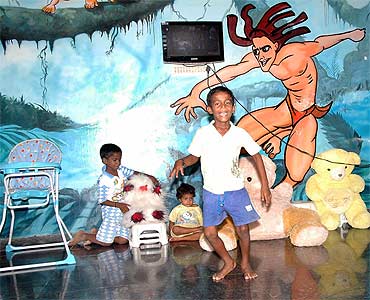 By the end of 2009, the first phase of Ananda Illam was ready for  55 children. One thing unique about the home was hostel rooms for both boys and girls. "This way, we made it different from an orphanage. It's a hostel and not an orphanage. We wanted to remove the tag and trauma associated with an orphanage."

Till 4th standard, teachers come to the Illam to teach them and after that, the kids are dropped at the nearby government school.

Looking back at the eventful journey Dr Manorama said, "Definitely, the journey was tough. But I allowed my heart to rule in the case of children. We crossed many hurdles. Many people even asked me whether I was HIV+. Let me be very honest. I never ever imagined that there would be a home like this for these children when I decided to bring home Krishanveni and Ravi. I thought they would die soon. More than 15 years have passed. But it has been a satisfying journey so far."