Survivor: 'Can I recover in time to join my job?' 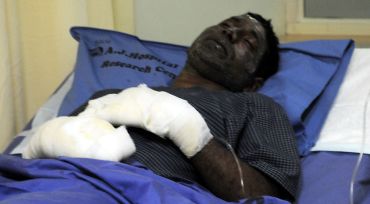 The first thing Omar Farook asked the doctors treating him how long it will take for him to recover. He was keen to join his first job that he had landed in Dubai before he took the ill-fated Air India Express flight to Mangalore on Saturday.

Farook, 27, a resident of Ullal, Mangalore, was on his first trip abroad. He had gone to Dubai to give job interview. He had aced the interview and coming back excited to await his Visa.

Dr Sanath Bhandary, consulting plastic surgeon at the A J Hospital and Research Centre, Mangalore, who treated Farook and another survivor Sabreena told rediff.com, "Farook has burns on his face and hands. Sabreena has suffered an ankle fracture. Both are stable now and it will take them 4-6 weeks to recover. Farook has cut on his hand and we might have to do plastic surgery after month as it is quite deep."

"We have given them antibiotics and fluids after initial treatment and now both are stable in the hospital Intensive Care Unit," said Dr Dinesh Kadam, another plastic surgeon treating the duo.

Farooq told rediff.com that the aircraft experienced turbulence as it was coming in to land. "The plane overshot the runway and stopped in a forest area and burst into flames. There was lot of commotion after the aircraft caught fire.  The aircraft had split and I saw a gap from where the flames were coming towards us.  I managed to jump out of the aircraft and fell on the ground. I walked for about half a kilometre before locals saw me took me in an autorickshaw to hospital."

One moment she was on the plane, next on a tree 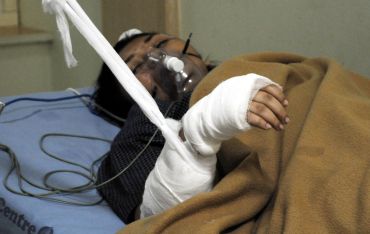 Sabreena, 23, a Bangladeshi national, is an intern at the KMC (a medial college in Manipal near Mangalore). She had gone to meet her parents who are based in Dubai. The only thing she can recollect is that the plane crashed and the next moment she was hanging from a tree from where she was rescued by villagers and taken to hospital.

Dr Bhandary said the assistant dean of KMC has requested the AJ Hospital to shift her to KMC and she is likely to be shifted on Sunday.

Sabreena was too weak to talk to rediff.com and a relative who spoke said she was sedated and resting in the ICU.

Asked what he felt that he survived, Farooq said, "It has been a hair-raising experience and I am fortunate to be still alive."

The luckiest of them all: Just minor injuries 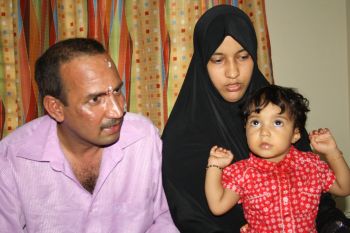 Abdullah Ismail 32, a resident of Puttur near Mangalore, was among the luckiest passengers on board the ill-fated AI flight. He miraculously escaped with only minor injures.

His brother Abdullah Kadar said, "We were on our way to pick my brother from the airport. We were planning to reach airport only by 7 am because the landing was only at 6 am. We were just two kilometers away from the airport when we were shocked to receive a call from my brother (Ismail) saying that the plane had crashed and he has managed to jump out. He managed to reach the main road with the help of villagers and we immediately reached the spot."

Recollecting the incident, Ismail told rediff.com, "The plane seemed to have landed properly but immediately we heard a loud noise that sounded like a tyre bust. The plane shook heavily and crashed through the fence of the airport and fell into a forested valley.

"The impact split the aircraft. I was sitting in a window seat (19A) and the split was near my seat. I saw the gap near the window and jumped down (20 feet) even as the flames engulfed the aircraft.  My hand got burnt when I tried to jump. I have got minor face and other injuries due to the jump. Two other passengers managed to jump with me from the aircraft.

"I walked half a kilometre in the forest and managed to reach a railway track. With the help of the villagers, I reached the main road where my brother was waiting for me. They immediately took me to K.S Hedge Medical Academy.

He works for a sport shoes shop in Dubai as a manager. He was coming on a ten-day holiday to see his little daughter.

"I have survived only because of the Almighty. I really can't believe that I am one of the few survivors in the crash. I cannot keep thanking God.

"But I have lost all my documents in the crash so I don't know when I will go back to Dubai."

He has been kept under observation for a day and is likely to be discharged on Sunday.