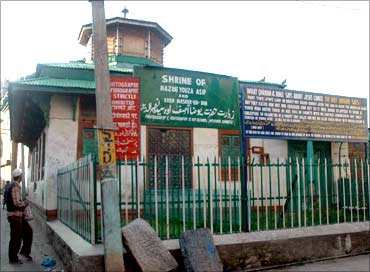 Look at the picture carefully. This nondescript Muslim shrine in Kashmir has shot into the international limelight after many believers claimed it was where Jesus Christ was laid to rest. Inquisitive visitors-- mostly Westerners--have started flocking to the shrine, forcing the caretakers to close down the religious structure. Rediff.com's Mukhtar Ahmad travels to Khanyar in Srinagar, in search of some spiritual answers.

There are several versions on Jesus' India sojourn. Some books argue Jesus did spend as many as 16 years in India, becoming a disciple of Buddhism. But many dispute the entire version, saying there has never been conclusive evidence on Jesus' visit to India.

The old debate or controversy resurfaced after Rozabal shrine of Sufi saint Yuz Asaf at Srinagar in Jammu and Kashmir banned visitors and believers alike from entering the sanctum sanctorum. It was at the Rozabal shrine, many believe, Jesus was laid to rest. However, there has not been any conclusive proof to substantiate the claim.

The shrine's move comes after some believers wanted to exhume the remains to obtain carbon dating and get a DNA done.

"Some Christians claim it is the grave of Jesus and they had approached us with a request to exhume the remains for DNA testing. But, we refused," Mohammad Amin Ringshawl, the shrine's caretaker, told rediff.com.

No entry now to the shrine 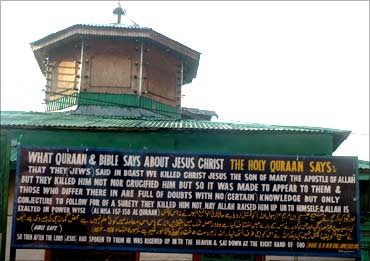 Image: What is embossed on the wall
Photographs: Umar Ganai

As always in such cases, the ban has had a domino effect. The shrine had a mention in The Lonely Planet, a worldwide guide for travellers. As the word spread, inquisitive visitors started flocking the shrine.

Angered by the sudden "interest" being shown by foreigners in the shrine, the authorities banned people from entering the shrine.

Incidentally, the man -- Aziz Kashmiri, senior journalist-- who first wrote that Jesus was buried in Kashmir-- passed away recently, rekindling memories of the controversy and interest associated with the grave in the Khanyar locality.

Aziz Kashmiri, the editor of a local Urdu daily Roshini, was the first to advance the theory in his book Christ In Kashmir published in 1973.

The shrine shot into limelight following the publication of the book underpinning the theory "that Jesus survived crucifixion and migrated to Kashmir'. 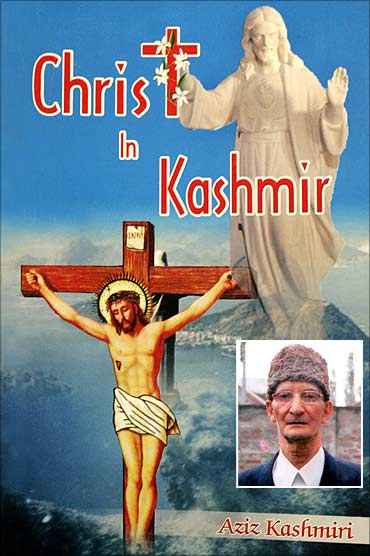 The claim is strongly contested by local Muslims who say the Rozabal shrine is the final resting place of two famous Muslim saints, Youza Asaf and Syed Naseer-ud-Din, who came here centuries ago.

Ringshawl says the controversy started in 2002 when an American researcher, Suzzane Marie, had met him and other members of the shrine committee and wanted to carry out the digging to exhume the remains for DNA testing.

"It is un-Islamic. Further the Holy Quran clearly mentions that Jesus did not die on the cross, but was lifted to heavens by Allah."

"Following our strong protests, the American lady had to leave the valley and we even filed a complaint against her in the local police station."

Ringshawl said following this episode 'the entry of tourists in the shrine was banned by committee'. "We have locked the shrine and we don't even allow any photography even from outside it. They were hurting the feelings of the local Muslims." 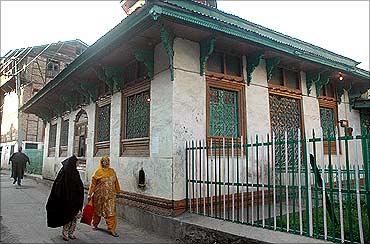 Image: Another view of the shrine
Photographs: Umar Ganai

The graves of saints are covered with green cloth embroidered with verses from the Holy Quran and local Muslims often stop at the shrine to say prayers.

In his book, Aziz Kashmiri writes, "Kashmiri history books tell us that Yus Asaf came from abroad. He was a prophet and a messenger. He came from Israel. He came to spread his teachings. He lived and died here. Yus Asaf was Issa. He was Jesus."

"The meaning of Yus Asaf is, The Healer. Another meaning is The Shepherd the one who teaches others. Our history confirms that Issa was known as Yus Assaf, here in Kashmir."

"The footprints were carved as a sign. The scars are clearly visible, sustained as he was nailed to the cross. They show that this is the same person who came here from Israel.

"And that he lived and died here. You won't find any footprints like these anywhere else in Kashmir."

Meanwhile, in an interview to Times of India recently, Suzanne refuted allegations that she had attempted to remove anything from the tomb, or dig it up.

"I can't imagine who started those rumours or why," she said and maintained that the belief that there is a Muslim saint in the same tomb is untrue. "The tomb predates Islam and could never be a Muslim tomb,"she was quoted as saying.