'I am the only saffron-clad accepted by Muslims' 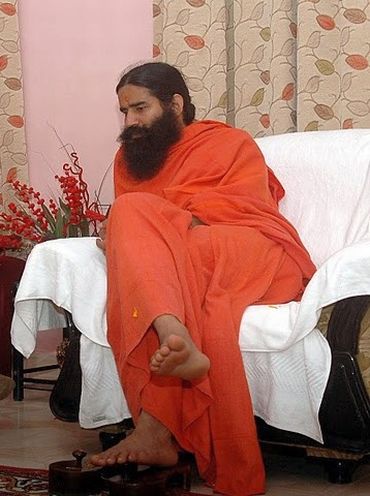 Three Delhi Police constables are on duty outside the house, sprawled on plastic chairs. They don't frisk you; before you can ask, they tell you how to find the person they are here to guard. The staircase is decorated with marigold. The devout have left their shoes, slippers, sandals and even ankle-length boots outside the door.

A bevy of people -- young and old, rich and poor, men and women -- are here to see Swami Ramdev. It is the house of a follower. Ramdev is here on his way from Sikkim to his ashram in Hardwar. In a few days, he is off to Nepal, where the president, as well as the prime minister, is his disciple, writes Bhupesh Bhandari.

India's well-known ascetic is seated on a sofa with his legs folded under him. He is draped in saffron, and his high-heel wooden sandals are under the chair. His torso looks supple. Ramdev, of course, is Indian rubber. Click on NEXT to read further...

It is certainly not easy being Ramdev 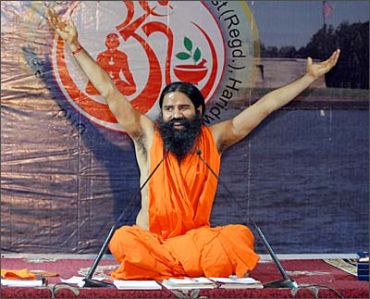 His lunch has been served -- cut mango, chikoos (sapodilla), grapes and watermelon. "I haven't eaten any grain or cereal for 13 years now," I am told.

New-age yoga guru, PT instructor to the masses, healer to the rich and mighty, enemy of multinationals, television star, homophobe and now an aspiring leader -- it is certainly not easy being Ramdev.

Educated Indians have always been sceptical of godmen. Their sex, land and financial scandals -- mostly sex -- get exposed with unfailing regularity. What has worked for Ramdev is that he has put physical fitness first, and has taken religion out of Yoga.

He has had his share of controversies, though. Communist leader Brinda Karat alleged that his medicine had bone powder. Tests carried out in laboratories found the claim unfounded.

The sale of Ramdev's medicine went up manifold.

He wants to change the country for good 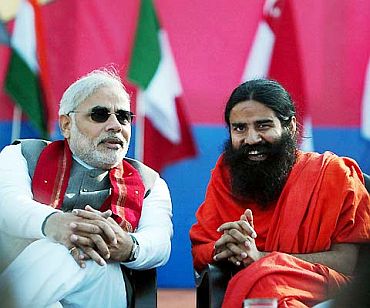 Neo-liberals have found his opposition to homosexuality primitive and galling. Undeterred, Ramdev says he wants to change the country for good. Next elections, his people will contest every seat of Lok Sabha.

On his agenda are removal of corruption, large public works for development and making systemic changes in accordance with traditional Indian wisdom. Food for me has also arrived: Preparations of gourd, potatoes and cottage cheese, puris of buckwheat, raita and kheer.

The crockery is brand new, the stickers haven't been removed. A spread for Ramdev has also been brought; he agrees to have a morsel or two. Ramdev is willing to debate each of the three agendas.

A strong role for the government is an open invitation to corruption, I argue. "What is lacking is the will power to end corruption," he says.

The extent of black money in the country, Ramdev says, is Rs 30,000,000 crore. The government should recall all currency in circulation and issue a new one -- all unaccounted money will fall into its hands. That money can be used for power, irrigation, waste treatment, etc.

'Punish the corrupt with death' 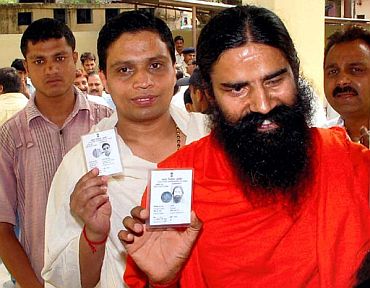 Seventy per cent of the country is below the poverty line, 400 million people in villages are landless and another 400 million are without jobs. Ramdev's solution is to give up to one acre to all the rural landless and raise minimum wages to Rs 10,000 a month.

"And punish the corrupt with death," says the ascetic with that trademark twinkle in his eyes. The legal and educational systems, he thunders, were imposed on us by the British to serve their own needs; there is no reason why we shouldn't have our own systems.

"What freedom is this," he asks. "Our law says that not one innocent should be punished, even if a hundred guilty go free. We should see to it that all guilty get punished; if that includes one or two innocent, so be it."

The buckwheat puris are delicious and melt in the mouth. More are on offer, but Ramdev asks the host not to force me. Rasgullas are brought for us, purchased obviously at the market. The host insists these are homemade. Ramdev knows better but still digs into the grandfather of all desserts.

'I am the only saffron-clad accepted by Muslims' 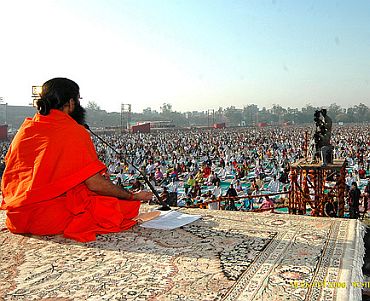 However radical his thoughts may sound, I realise that Ramdev oozes confidence. This is because he thinks he has the numbers all worked out. About 30 million, says he, have attended his Yoga camps. Each of them goes back to a family of five to seven. So, that's at least 150 million votes. He is also on television round the clock. That, claims Ramdev, gives him viewership of 1 billion!

Then there are the latent supporters, says he. "Even evil idolises truth. Ravan's brothers wanted Ram to win. A philanderer doesn't want his kids to follow his footsteps."

He also has a huge fan following amongst Muslims. "I am the only saffron-clad accepted by the Muslims," he says.

Muslims, Ramdev has said, can recite verses from the Koran while doing Yoga. Ramdev says he has thought of a name for his party but will not disclose it to me. He will not contest elections. He wants to have an organisation of up to a million people in each district, and aspires for power at the Centre and not at the states because that's where real power lies.

'He sells medicine worth Rs 25 cr every month' 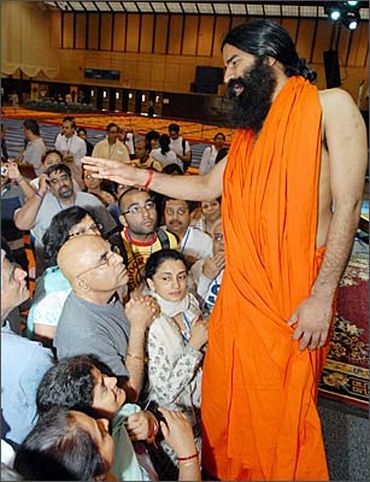 Is there a role for private enterprise in Ramdev's worldview? Definitely, says he, but the government needs to fix prices of all goods and services and, thereby, control profits! He says he knows most large businessmen and what kind of obscene money companies make.

Ramdev himself runs a business of no small proportions. This includes hospitals, the media and herbal products. He sells medicine worth Rs 25 crore every month; sale of his books and CDs fetch Rs 2 to 3 crore.

He has set up a food park near Haridwar with an investment of Rs 500 crore. All told, Ramdev provides employment to 13,000 people. "What are your profit margins," I ask. Sixteen per cent, says Ramdev, but quickly adds that his operating costs and retail margins are way below others and that's why his products are priced on an average 50 per cent below rivals.

"But you must be a rich man," I tell Ramdev, "Haven't you bought an island off the Scottish coast." The island of 700 acres, Ramdev counters, was a gift from the Poddars of Glasgow (Mr Poddar is from Bihar, Mrs Poddar from Nepal). Somebody has even gifted him 95 acres near Houston. Then there's something similar in Canada. Individuals have also contributed towards the Rs 500-crore food park. 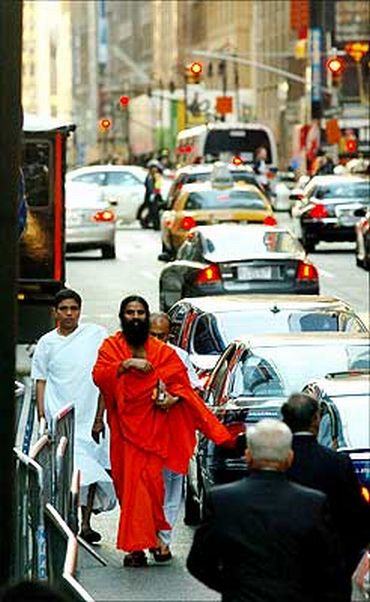 "But why do you hate multinationals? Even several Indians like the Tata group have now become multinational corporations," I ask Ramdev. They take out a lot more money than they bring in, he answers, and take away more jobs from traditional craftsmen and local businessmen than they bring.

Fuzzy logic indeed, but Ramdev speaks with conviction. Multinational corporations are not required. The Rs 300,000,000 crore of black money is more than enough to take care of all Indians. This is more economics than I can digest in a day. Ramdev's aide whispers in my ear that my time is up.

I get up, but want to know about Ramdev's healing powers. (He has been censured for claiming to cure AIDS; Ramdev, in turn, claimed he was misquoted.) How has George Fernandes benefited from his cure? "When he came to me, he couldn't take a step; he now walks half a mile," says he.

"Weren't you called to cure Atal Bihari Vajpayee's bad knee? He had to go for surgery finally," I counter. "He did not follow my prescriptions," Ramdev answers. I take my leave. There's a camera crew and a foreign correspondent waiting for Ramdev in another room. A family of six well-proportioned Sikhs has come for the Swami's darshan. The constables ignore us on the way out.