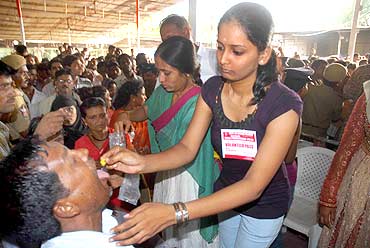 Hyderabad's famous Goud family started distributing "fish-prasadam" on Tuesday evening coinciding with the onset of Mirgasirkarti or monsoon season in Andhra Pradesh. Thousands of men and women have gathered from different parts of the country at Hyderabad's sprawling Exhibition Grounds with the belief that herbal medicine along with a tiny live fish can cure asthama.

As usual the occasion has been marred by the controversy as rationalists under the banner of Jana Vignana Vedika have launched a counter campaign describing the fish medicine claim as bogus and humbug. The volunteers were distributing pamphlets at the venue urging people to desist from taking the medicine as gathering of thousands of people and swallowing the medicine at the hands of few people can lead to further spread of diseases.

Those who have gathered for the medicine include people from as far as Punjab, Assam, West Bengal, Bihar, Orisssa, Maharashtra, Gujrat, Rajasthan.

More than 700 policemen have been deployed to regulate the flow of the people on the counters where members of Goud family along with other volunteers were giving medicine to the people. Every visitor has to bring a live fish to swallow it along with the medicine.

To avoid any legal trouble, Goud brothers have stopped calling it fish medicine and renamed it as "prasadam" saying it was being prepared in accordance with the formula given to their great grand father by a Sadhu from Himalayas to freely treat the asthma patients once every year. While at the peak of this phenomenon up to two lakh people used to gather to swallow the fish and yellow paste like medicine, the size of gathering has started declining for the last couple of years. Despite persistent demand, the Goud family has refused to divulge the formula of the medicine. "if we do so it will lose its efficacy and others will start using it for commercial exploitation", says Bathini Harinath Goud, the spokesman of the family.

But Ramesh, state convenor of JVV alleges that the family was benefiting by fooling the people. "The state government had allotted the family five acre prime land ten years ago as Goud family had said that they will grow herbs on it. The value of the land today is Rs 50 crore. It should be taken back from them as not a blade of grass has been grown there".

For decades, the Goud family distributed the medicine among the people in the congested by lanes of Doodh Galli in old Hyderabad but during Chadrababu Naidu regime about ten years ago the family was persuaded to do it on the sprawling Exhibition Grounds for proper crowd management. The distribution of medicine was expected to continue for next 24 hours.