Image: The bilateral meeting between the Indian and Pakistani delegations in Islamabad
Photographs: Jay Mandal/On Assignment

India secured an assurance from Pakistan on Thursday that it would act on the leads given by Pakistani-American terrorist David Headley to unravel the conspiracy behind the Mumbai terror attack even as the two countries agreed to continue their dialogue.

At the conclusion of daylong discussions between External Affairs Minister S M Krishna and his Pakistani counterpart Shah Mahmood Qureshi, it was announced that the two ministers would meet next in India in the near future.

It was clear that during the "frank, candid and honest" discussions the two sides had vigorously flagged their known concerns--terrorism for India and Jammu and Kashmir for Pakistan. The two ministers held a joint press conference, delayed by several hours due to extended talks, at which both stuck to positive overtones, which could not camouflage the sharp differences on Jammu and Kashmir in particular.

There were some testy moments during the 40-minute press conference when the two ministers were asked questions on provocative anti-India statements regularly being made by Lashkar-e-Tayiba chief Hafiz Saeed and recent disturbances in the Kashmir valley.

A curt Qureshi took exception to Home Secretary G K Pillai's remarks two days ago that Headley had revealed to interrogators that the Inter State Intelligence and Saeed had played a "much more significant role" in planning and executing the Mumbai terror attacks. Asked about Saeed's statements, Qureshi told the questioner that both sides should refrain from negative speeches that vitiate the atmosphere and then asked, "on the eve of this dialogue tell me to what extent" the Indian Home Secretary's remarks help.

"We both (ministers) are of the opinion that it was uncalled for," Qureshi said without any refutation from Krishna.

The meeting with journalists was held after Krishna had called on President Asif Ali Zardari and Prime Minister Yusuf Raza Gilani in between three rounds of parleys with Qureshi. He flies back home on Friday. Qureshi stated that Pakistan would pursue seriously the leads provided by Home Minister P Chidambaram on the basis of Headley's interrogation.

Krishna said he had got assurance from the "highest level of leadership" of Pakistan that the leads provided by Chidambaram on the basis of Headley's interrogation would be investigated so that the conspiracy behind the Mumbai attacks is unravelled and perpetrators of the carnage punished.

He said Qureshi had also assured him that the "investigation in Mumbai attacks, taking into account the latest leads provided by David Headley and conveyed to Pakistan by the Home Minister, will be pursued vigorously to unravel the conspiracy." He said "perhaps, that could be the best confidence-building measure." 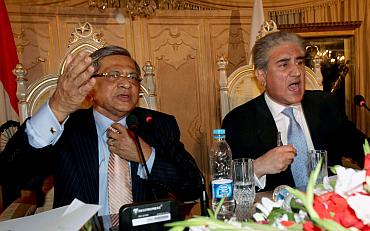 The external affairs minister also pressed for speedy trial of the seven 26/11 arrested accused in Pakistan.

Responding to this, Qureshi said to take the judicial process in Pakistan forward, there will be requirement of the magistrate and other Indian officials who recorded the statement of Ajmal Kasab, the lone Mumbai attacker arrested, to appear before a Pakistani court. He said he had discussed this issue with Krishna in the context of speeding up the trial process.

To a question by a Pakistani journalist about alleged involvement of India in fuelling unrest in Balochistan, Krishna asserted that Pakistan had not provided "any shred of evidence" in this regard.He noted that this had found mention during the meeting between the Prime Ministers of the two countries in Sharm-el Sheikh in July last year and since then India has been "waiting" for evidence from Pakistan.

"Forget about credible evidence, not even a shred of evidence has been given by Pakistan. If any evidence is given, the government of India will look into it," Krishna said. Qureshi pitched in, saying during his meeting with Chidambaram last month, he had raised the issue of Balochistan and the Indian Home Minister had told him that India was not interested in destabilising Pakistan. "His statement was encouraging," the Foreign Minister said. Krishna said he had also raised with Qureshi the issue of infiltration of terrorists from Pakistan, which has witnessed a 40 per cent increase from 2008. On this, Qureshi said he had "categorically reiterated" the position that "infiltration is not the policy of government of Pakistan or any intelligence agencies of Pakistan. Period." He said he had told Krishna that "if there are individuals having crossed over, deal with them firmly and Pakistan will cooperate." There are mechanisms in place to deal with issues like infiltration and ceasefire violations, Qureshi said, adding that he had suggested that Director Generals of Military Operations (DGMOs), who talk on a weekly basis, was the most appropriate forum to sort these out.

J&K is a cause of concern, said Qureshi 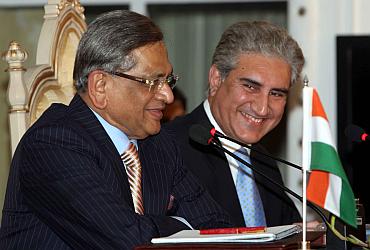 The Pakistan Foreign Minister said he had discussed with Krishna the recent developments in Kashmir, "human rights violations" and imposition of curfew in a number of cities and "use of armed forces for law and order and loss of lives". He said it was an "issue of concern to everyone, including the elected Chief Minister of Jammu and Kashmir (Omar Abdullah)" and in this regard referred to recent statement of Abdullah that progress in Indo-Pak talks would help.

Krishna noted that there is an elected government and "legitimate" Chief Minister in Jammu and Kashmir and maintaining law and order under the Indian Consitution is the exclusive prerogative of the state government. Justifying the deployment of army in Kashmir, he said that if the state government felt that it is unable to maintain law and order and to protect human rights, then certainly they could always look to New Delhi, the Federal government, for any kind of assistance.

On allegations of human rights violations in Kashmir, he said there were institutionalised networks and NGOs that take
care of human rights violations, if any. "Any violation which takes place in India is immediately taken up by organisations like the Human Rights Commission and anyone can approach the Human Rights Commission. Hence, I would like to reassure my friends that the state government and the appropriate agencies which are in-charge of taking care of human rights will certainly take up any violations that is brought to their notice," Krishna said.

The External Affairs Minister said today's talks had helped in better understanding between the two countries. "We are starting a journey cognisant of complexities in the relations, challenges that lie ahead and the promise that good neighbourly relations hold," he said. He said the two leaders discussed steps to promote trust and confidence in keeping with the mandate given to them by their respective Prime Ministers. Qureshi echoed similar views and said "we have to respect India's point of view and India has to understand our point of view. So, together we have to evolve." He noted that India-Pakistan relations have been "complex" and seen "difficulties" and the two countries were trying to build friendly relations. 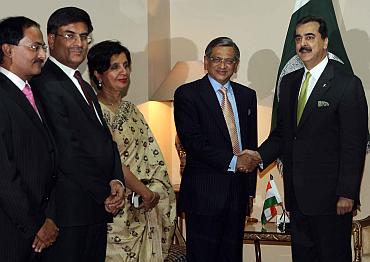 Noting that his government is committed to "friendly, cooperative and good neighbourly relations with India," Gilani said Pakistan had "stood by its commitments" made during his meeting with his Indian counterpart in Bhutan and in the meeting of the Interior Ministers. The "ball was now in court of India to take the peace process forward by resuming the dialogue on all the outstanding issues," Gilani was quoted as saying during the meeting, in an official statement.

Gilani said Pakistan has taken "serious and credible steps to bring perpetrators of the Mumbai incident to justice but wants India to share with it the credible and prosecutable evidence against the accused to achieve that goal". Islamabad is also steadfastly pursuing matters agreed on during the Interior Ministers' meeting last month as it considers terrorism as a common threat to both countries, Gilani said. "The evil designs of terrorists can only be defeated through continued dialogue between Pakistan and India," he added.

The existing environment of goodwill in Pakistan for fostering friendly relations with India "needs to be benefited from through concrete measures to address all the outstanding issues between the two countries, lest it gets eroded with the passage of time," he said.

Gilani said he has "personally invested" in improving relations with India as he was of the firm belief that it is the only way forward for peace and prosperity in both countries and South Asia.

He underlined the fact that it had been agreed in his meeting with Prime Minister Manmohan Singh in Thimphu that "both sides would enter into discussions on all the issues of mutual concern and hence every dispute would be put on the table as part of the dialogue".

Krishna said his visit was part of initiatives taken by the Prime Ministers to resume meaningful dialogue. He agreed with Gilani on the need to bridge the trust gap between both countries and to enhance interaction between them at every level.

Krishna said despite the respective positions of India and Pakistan on certain issues, New Delhi will continue striving to reach "mutually agreeable solutions of the irritants" through dialogue.

Talks between the two countries will pave the way forward to open up avenues for discussions in various fields, Krishna added. Gilani also called for increased exchanges by way of people-to-people contacts and visits by parliamentarians to
help bridge the trust gap between the two countries and suggested immediate release and repatriation of all incarcerated fishermen and those prisoners who have completed their sentences. 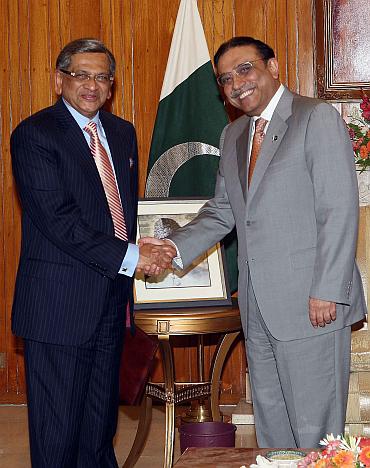 Zardari said that "destinies of the people of both Pakistan and India and development of the entire region lies in friendly, cooperation and good neighbourly relations between the two countries." A statement from the Presidency said Zardari "stressed for timely information and intelligence sharing between the two counties to prevent any incident of terrorism and violence and that terror incidents don't affect our ties in the future." Krishna was accompanied by Foreign Secretary Nirupama Rao and Indian High Commissioner in Pakistan Sharat Sabharwal. From the Pakistani side those who attended the meeting included Qureshi, Interior Minister Rahman Malik and Foreign Secretary Salman Bashir. While appreciating the re-engagement between the two countries, Zardari said that heavy responsibility devolves on both Pakistan and India to have a sustained dialogue and steer "our nations from the path of conflict to a cooperative course for the uplift and welfare of the region and the people of the two countries."

"The President said that the resumption of composite dialogue will help remove mistrust and restore confidence in relations between the two countries," the statement said, adding, it would also help resolve all outstanding issues including Kashmir, water, Sir Creek, Siachen, terrorism and other issues impeding mutual cooperation. He said that the water issue was becoming serious as it had adverse impacts on Pakistan's agriculture and added that the Indus Water Treaty should be fully honoured and implemented. Zardari also said that trade relations between the two countries would see a marked increase once the resumed dialogue process continued without any interruption. The President while referring to Pakistan's fight against extremism said that terrorism is a common enemy and Pakistan is against militancy and terrorism in any form and in any location and both the governments needed to work more closely to eliminate this menace.