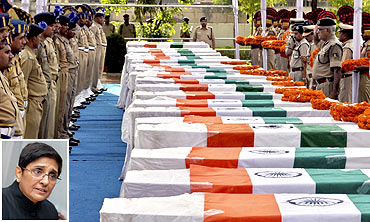 The Centre and the states need to synchronise their forces to tackle the surge in Maoist violence, believes former Indian Police Service officer Kiran Bedi.

In an interview with Rediff.com's Anisha Ralhan, she argues that freedom from corruption and a fearless leadership is imperative to ensure peace in the troubled red corridor.

A few days ago you tweeted that Home Minister P Chidambaram's decision to reconsider the deployment of the Central Reserve Police Force in Maoist areas is not sufficient and there is a need for a holistic plan. Could you please elaborate on what the holistic plan should be?

Policing is an integral part of governance. It is a whole but it is also a part of the larger whole. Just like a human organ like the head, it's got intelligence, stamina, strategy and surveillance. But it cannot function independently in the absence of other life-sustaining organs.

Unfortunately, there is nobody to define the role of other organs (the bureaucracy, the state and the central governments) that are required to run the organism. There exists disharmony not only at various hierarchical levels in the police but also a larger disturbing discordance between various functionaries.

Do you see a lack of synchronisation as a fault-line in the anti-Naxal strategy?

Absolutely. You see, there is nobody to question and analyse the role of the police and other organs in the system. We don't know who has the strategic controls. If there is a strategy, let it be shared to whatever extent it can be shared.

We need to be assured that there is somebody to ensure that the diverse forces in the power structures work in tandem.

E N Rammohan (the former chief of the Border Security Force who investigated the killing of 76 jawans in Dantewada on April 6) is the only person who revealed that there was a lack of coordination between the state forces and the CRPF.

Later on, some senior police officials agreed that the counter-Maoist plan was not carried out in synchronisation. I am basing my observation of lack of coordination on his statement.

'You need somebody to fill the loopholes' 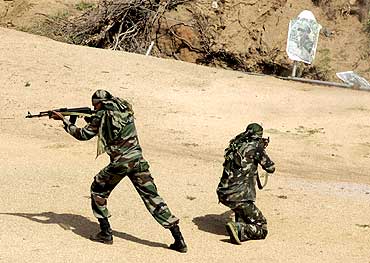 Even after the Dantewada investigation report outlined the lack of facilities for the CRPF personnel -- the paucity of medical amenities and food and the high-levels of stress amidst the jawans -- nothing has really changed for them. What do you have to say about this?

In policing, there is a great need for human resource management but ironically there is no post of an HR manager to look into the physical and psychological needs of policemen.

I haven't seen a single institution in the corporate world operating smoothly without a HR team. The moment you design the post of a HR manager in the police, your whole outlook towards your team changes. You designate an official to look after their health, their professional needs, their preparedness and motivation, which in most cases becomes quintessential.

How can you expect army jawans to constantly fight in alien jungles without understanding their psychological needs?

It's not about numbers and deployment anymore; it's about the quality of men and their needs have to be understood.

So there is a need for a collective approach to holistically tighten the nuts and bolts in the present administration and ensure transparency.

How proactive does the local police need to get in the strife-torn areas of Chhattisgarh?

The police, like I said, are a part of the whole system. They cannot be separated from the policy-making, administrative-strategy and developmental work carried out by the state government.

Therefore, the three coordinators of the state -- the chief minister, the chief secretary and the director general of police -- need to work in utmost harmony. So we need synergy within the police administration at one level and then alignment with the Centre and state government to form a complete triangle.

There has to be an in-charge to regulate their meetings and that cannot be a superintendent of police because people are being killed repeatedly on the same routes. You need somebody to monitor the trio and fill the loopholes in the strategy.

'It is foolish to have high expectations from the CRPF' 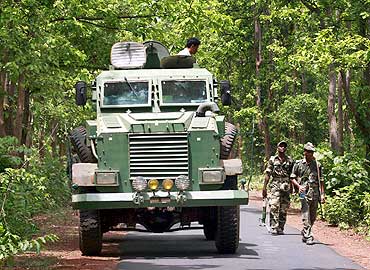 What measures would you recommend specifically for the local police?

The police certainly need to be vigilant at the identified turbulent areas. They need to devise intelligent ways to gain public support. Employment of young boys and girls in the police force is one such way.

Gone are the days of aerial warfare; you know you cannot wipe out forests and butcher innocent lives. Training them in guerrilla style is the only way to go about it.

The police must also take the onus of familiarising the CRPF with jungle warfare after they have spent adequate time in jungle warfare schools. I would advise the state governments to hire retired brigadiers on the lines of the school run by Brigadier Basant Kumar Ponwar in Bastar district of Chattisgarh. We need many such schools to implement our strategy.

Why is it that an elite paramilitary force like the CRPF is increasingly incurring defeats and emerging weak in Chhattisgarh, after it has been successful in tackling insurgency in Kashmir and the north-east?

The CRPF is caught between a rock and a hard place. It is not a guerrilla force, it's a force deployed to maintain law and order. The young force lacks a steady army leadership.

It is foolish to have high expectations from them without acclimatising them to the living conditions in the dense forests of the red corridor.

Not just the police, I would recommend the state administration in totality to concentrate on the villages under their control rather than ceding newer territories.

'What are bureaucrats and the chief minister appointed for?' 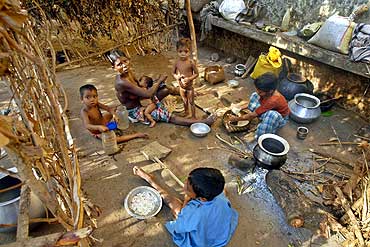 Well, the state administration is hung up with the idea of capturing tribal land and bringing them to obedience by using force. I am saying that let's not cede any more land but govern the existing ones efficiently.

Let the villagers see the difference between the Naxal-controlled areas and the government-manned villages. Set up schools and hospitals and undertake other developmental activities in order to set the example of a model village.

The common man will be lured to the prospect of a bright future and will automatically resist the Maoist army.

It's time we stop condemning them and begin to understand their needs. Provide good governance through honouring tribal rights and implement the National Rural Employment Guarantee Act. Provide safety to their women and win their trust as you deliver. Free them from jungle raj.

What are bureaucrats and the chief minister appointed for? Questions on the use of the state budget need to be addressed. Somebody has to monitor the funds allocated to the state government for developmental activities. Aren't these poor states widely known for corruption?

According to me, this is financial terrorism and it needs to be addressed urgently. You can't get away with robbing a poor state. This is providing fodder to the fire.

I specially want to question bureaucrats because unless they clear a file, no money can be sanctioned for the welfare of the downtrodden. They are not elected representatives selected for a purpose. Where is their accountability? Nobody knows how many have retired or have been suspended from their service

So are you saying corruption is one of the many drawbacks of the system?

You cannot have a coordinated function (between various agencies) because corruption is a nexus. It works through gangs. The bane of our problem is corruption in the political hierarchy and conspiracy in corruption by the bureaucracy. A corrupt person has more to hide than to speak about, which is why accountability is missing in the system. These are the root issues that need to be rectified at the earliest.

'This is a war against your own people' 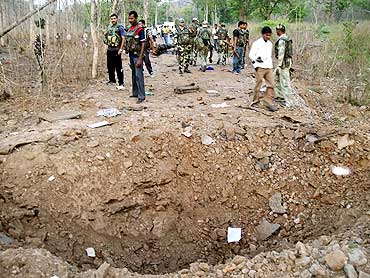 Do you think Chhattisgarh needs a special police team like the Greyhound unit (an elite anti-Naxal force in Andhra Pradesh)?

It takes four years to come up with something like the Greyhound team. So, as a long-term solution, yes, but the decision has to be taken by the government. It comes across as a political move than being merely an administrative one.

I would rather suggest the formation of a special force through the recruitment of tribal youth. I remember the time when I was posted in Mizoram. We faced unlawful groups, every now and then, carrying out armed rebellion. But what amazed me was their agility (while operating in) jagged terrains.

We don't need to train them to impart warfare skills; we need to educate them about the law of the land so that they become a part of the system under lawful control.

Do you recommend the strategy applied to contain the Khalistan movement in Punjab by a belligerent police force as a possible solution to counter Maoists?

I think in those days the state government was in alignment with the Centre. (then Punjab police chief) K P S Gill was effectively backed by the Punjab chief minister. There was a synergy in the state -- even though the CM had to pay the price in the end -- which is what we primarily lack now. It's time to move from box-type strategies to a more organic approach.

That's why I talked of a holistic plan which works from the bottom to the top, in which the constabulary is heard, the (problems of the) people are addressed. It is not a conventional war because it is against your own people.

Such unconventional wars cannot be fought in isolation.

'We are not short on solutions' 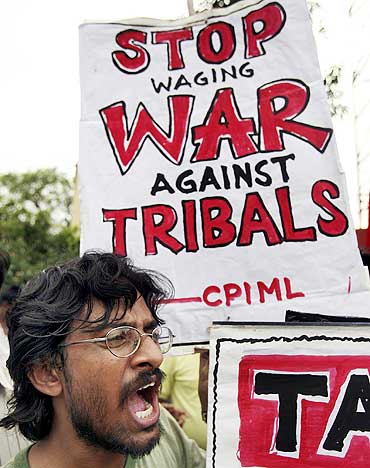 You had suggested the introduction of a new Model Police Act as a pragmatic solution to tighten the internal security of Maoist-inflicted states. Can you please elaborate on that?

The Draft Model Police Act of 2006, as part of police reforms, provided for Special Security Zones to be created in the red corridor which is a common development area.

That means bringing together diverse political components but working through a coordinated bureaucracy. But unfortunately, there is no talk about it. It is one of the roadmaps to arrive at a better strategy and therefore should be debated.

We are not short on solutions; we need people in charge. The key to this is absolute integrity, freedom from corruption and from cowardice in leadership.

We need a consistent long-term Centre-state policy to lead to clarity and not merely a political statement; otherwise you are back to square one.