A pilgrimage in the shadow of violence 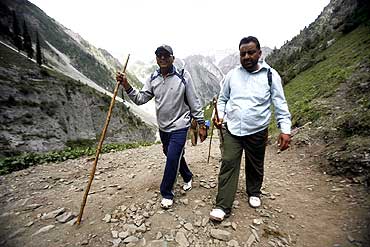 The annual Amarnath Yatra is on amidst tension due to a curfew imposed in nine towns of the Kashmir Valley.

The first batch of pilgrims began their journey on Wednesday. An indefinite curfew has been imposed in the towns of Bijbehara in North Kashmir and Pahalgam in South Kashmir.

Extra security for this year's yatra 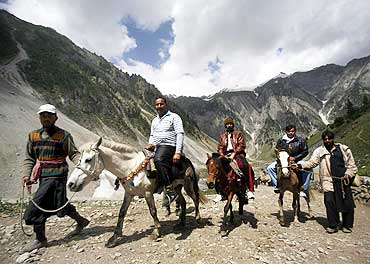 Anantnag, Kulgam and Pulwama are already under curfew following the death of three youths on Monday in clashes between the Central Reserve Police Force and stone-pelters.

Anantnag and Pahalgam towns fall on the Jammu-Pahalgam pilgrimage route. But those taking the North Kashmir Baltal route to reach the cave shrine have to pass through Bijbehara, Awantipore and Pampore towns in the south.

The authorities have made extra-ordinary security arrangements for this year's yatra in view of the heightened tension. 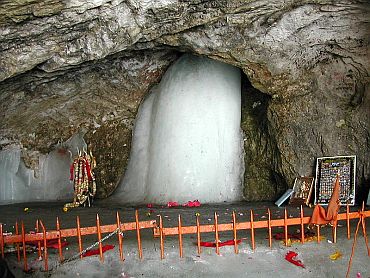 A multi-layer security is in place right from winter capital Jammu to the cave shrine, with the mountain heights being secured by the army, the roads by the Border Security Force and base camps, transit camps by the CRPF and local police.

Security forces have been ordered to show maximum restraint even in the face of any provocation by stone-pelting mobs. An additional 3000 BSF personnel have also been sent to the troubled state so that the pilgrimage to the holy cave is in no way affected.

The CRPF has also deployed 50 companies comprising 6,250 men and officers while the Army has set up 97 area-domination posts in and around the cave shrine in Lidder Valley, besides Pahalgam and along the route in Anantnag, Ramban and Udhampur districts.