'Hope we get to see him just once' 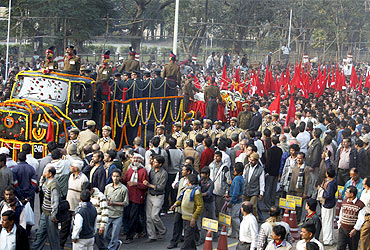 Jyoti Basu's punctuality was a part of the Leftist folklore. However, the time schedule went awry in his last moments as thousands of people thronged the streets of central Kolkata to pay their last respects to the Marxist veteran.

Police and volunteers wore a helpless look as a sea of people poured in from every possible corner of the city. Their sole aim was to be a part of Basu's last rites. "Hope we get to see him just once," said a middle-aged man to his friend, adding "The queue just isn't moving" 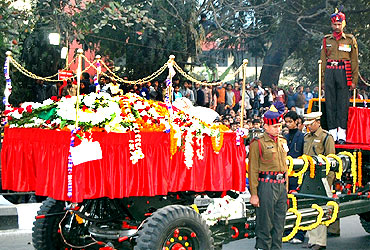 The entire stretch of central Kolkata that we fondly refer to as aapish para (a locality that houses all the state and central government offices) was full to the brim. Those who made the mistake of traveling to that part of the town in their cars had to get off their vehicles and start walking instead.

The road ahead seemed a long one and its end could not be seen. Pavement barricades did little to prevent the Basu loyalists from straying on to the main roads as traffic constables waved their batons in every possible direction in vain.

'You won't be able to control the traffic today, sir' 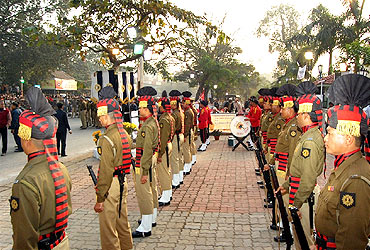 "Do you think you can manage the crowd this way?" asked a young woman in her early 20s, with a bouquet of red roses in her hand. She approached one of the traffic sergeants deployed in the area, looked him straight in the eye and said, "You won't be able to control the traffic today, sir. It's just impossible. Take leave instead."

The sergeant chose to ignore the comment, which on other days would have fetched a stern rebuke.

A sense of respect and fondness 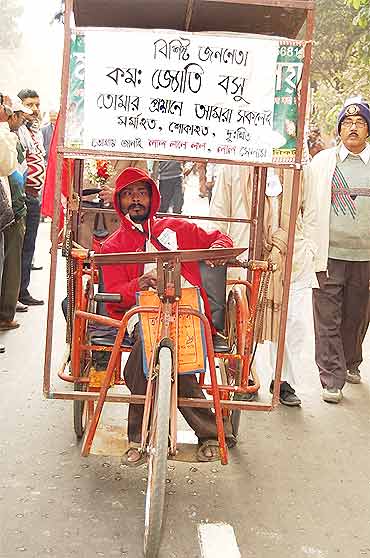 The crowd consisted of people from every walk of life. There were doctors, engineers, businessmen, government officials, homemakers, students, hawkers, politicians et al -- a sense of respect and fondness for Basu being their common bond.

A young flower-seller from North 24-Parganas was doing a brisk business selling flowers to those who did not have any. "I think I will be able to sell the entire lot. In fact, I will run out of my stock soon," she said, craning her neck to catch a glimpse of the long queue ahead of her.

End of an era in Indian politics 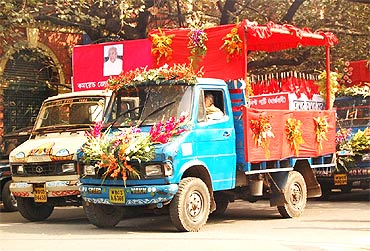 On the other side of the road stood a middle-aged woman, holding the barricade in one hand and a child in another, as silent tears rolled down her cheeks. Her companion, a man in his mid-40s was beside her, comforting her with his silence. The couple portrayed a picture of gloom. It hit me, hit me hard.

Prime Minister Manmohan Singh said that the death of the 95-year-old Communist Party of India-Marxist leader marked the end of an era in Indian politics, while Congress president Sonia Gandhi gave him credit for being the architect of the first United Progressive Alliance government.

They were the unknown faces 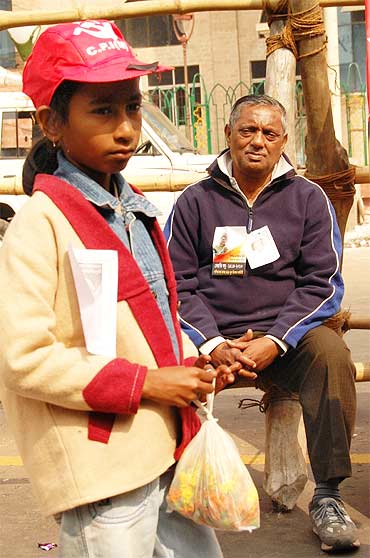 Don't think people who took part in Basu's last journey, who cried and mourned his demise are aware of such 'rather complicated' political statements.

They braved the rush and the never-ending serpentine queues just to catch a glimpse of their favourite leader.

They were the unknown faces, the ordinary people of West Bengal, the nameless masses, who till last Sunday, believed they had the nonagenarian CPI-M patriarch to turn to in times of need.

'It's like losing the oldest member of your family' 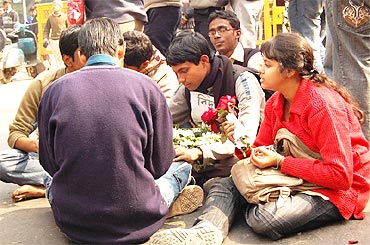 "It's like losing your old and ailing grandfather, you see," said 35-year-old Ashok Maity of Howrah.

"You sought his blessings, respected his dry humour, hated his idiosyncrasies but took comfort in the fact that he was there to hold your hand when you needed it the most. It's like losing the oldest member of your family." 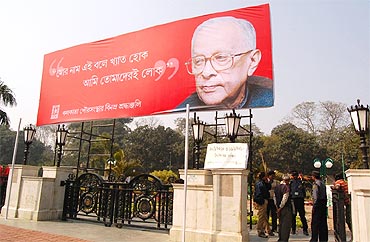 Basu's body was brought to the assembly at 10 am after briefly halting at the CPI-M state party headquarters at Alimuddin Street and at Writers' Building, the state secretariat, which was his office for 23 years. Chief Minister Buddhadeb Bhattacharjee and Chief Secretary Asok Mohan Chakraborty placed wreaths there.

The national tri-colour was draped on the body over the party's red flag with personnel drawn from the Army, Navy and Air Force standing at attention. 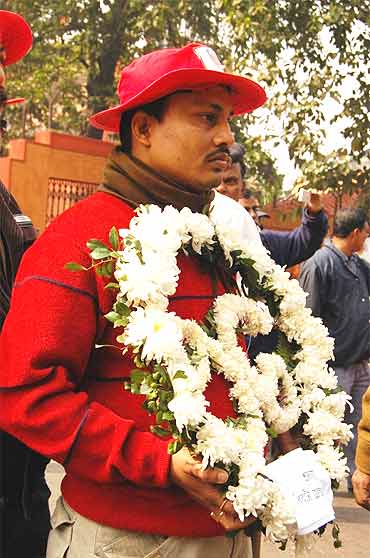 A large portrait of Basu with folded hands formed the background. Basu last attended the assembly on February 1, 2001, where he was given a reception by Speaker H A Halim for his over 50 years of dedicated service to the people.

The body was taken on a gun carriage, escorted by defence personnel drawn from three services, towards the state-run SSKM Hospital from the assembly at 3 pm.

En route to the hospital, he was given a 21-gun salute at Mohur Kunj, a park adjacent to the Victoria Memorial, by the Kolkata Police