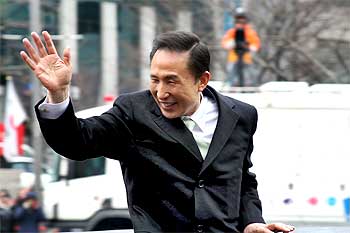 The 'Bulldozer' is in India this Republic Day. The man credited with overhauling South Korea's fortunes will witness an emerging superpower's might and its diverse culture when he takes the high seat among millions of Indians on January 26.

South Korean President Lee Myung-bak, whose rags-to-riches story is cited as case study across the world, is the chief guest at the 60th Republic Day celebrations in New Delhi.

Being in the vicinity of a 'rogue' and unfriendly Kim Jong Il (North Korean dictator) isn't easy. Despite the threat of an attack looming, the South Korean President has gone about transforming South Korea into an economic giant. 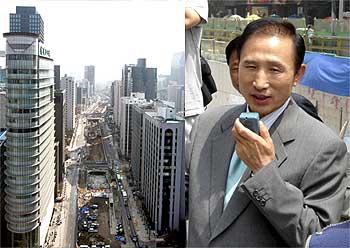 As a young employee at Hyundai in the 1960s, Lee buried the once polluted Cheonggyecheon stream under an elevated highway that would carry about 168,000 cars a day into the heart of the city.

Later, as Mayor or Seoul, he went on an overdrive and remodelled the haphazardly developed city.

He added rapid transit buses to the city's transportation system, laid the foundation of the green cover, which the city now boasts of, and landscaped the banks of the Cheonggyecheon stream to create a 5.8-km-long, $360 million piece of urban watershed. 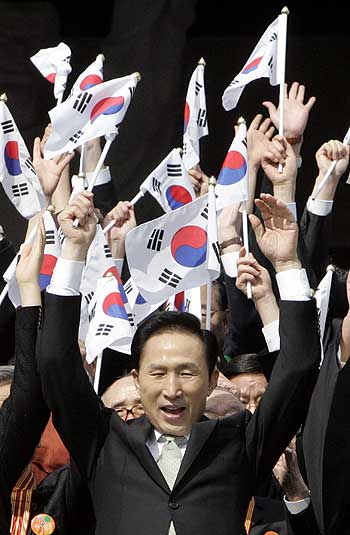 Lee grew in poverty and went on to make millions. Born in the Japanese city of Osaka in 1941, his parents couldn't afford his education. He was the fifth of seven children they bore. However, he put himself through high school -- working through the day as a labourer and then studying at night.

In Lee's words, "The chronic poverty that haunted my family never disappeared until after I was in my 20s." After graduating from high school, he enrolled in and graduated from Korea University, at one point, working as a garbage collector in order to pay for his tuition.

Armed with a degree in Business Administration, he joined Hyundai Engineering and Construction as an entry-level employee. It was here that he earned the nickname of 'Bulldozer'. 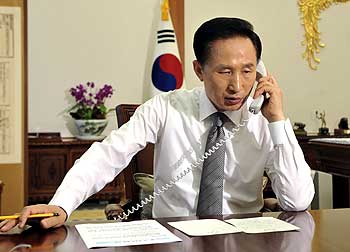 Image: President Lee Myung-bak talks with US President Barack Obama on a telephone at the presidential Blue House in Seoul
Photographs: Blue House/Handout/Reuters

He soon worked his way up the Hyundai hierarchy, becoming the CEO of the auto giant in 12 years. Fifteen years later in 1988, he took the plunge into politics.

Lee entered the Korean National Assembly as part of the Democratic Liberal Party in 1992, and went on to be elected as Mayor of Seoul in 2002. But his big moment came in December 2007 when he was elected as the South Korean President.

The two pillars of Lee's diplomacy was bolstering relations with the four major regional powers -- the US, Japan, China, and Russia -- and intensifying the diplomatic drive for a stable supply of oil and other natural resources.

However, his primary attention was on North Korea. 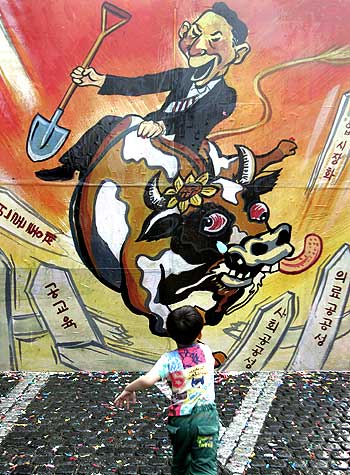 Image: A boy throws a water balloon at a portrait of Lee Myung-bak during a rally to demand the full-scale renegotiation of a beef deal with the US and the President's resignation
Photographs: Jo Yong-Hak/Reuters

On becoming President, Lee vowed to link additional inter-Korean economic projects to progress in the six-party disarmament process. Talks with North Korea are, however, still in a deadlock over Pyongyang's provision of its list of nuclear programmes.

Lee supports the reunification of Korea, although he believes that political differences between the two Koreas create an enormous obstacle to reunification.

In his initial years as President, his policies came under severe criticism. So much so that his popularity ratings nosedived after he inked the Free Trade Agreement with the United States and then over the resumption of US beef imports to the country.

However, Lee stood his ground. Eventually, South Koreans came around to accept him. According to the Wall Street Journal, Lee's plan to privatise public companies was an "important step" towards Seoul's reform. 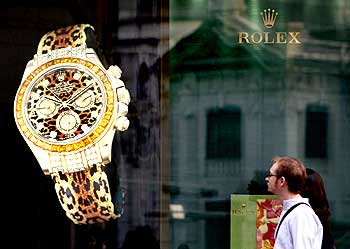 Lee is the first businessman-turned-President to run Korea. A strong supporter of free trade agreements with foreign countries, Lee is expected to hold talks with New Delhi in this regard during his visit.

Lee's trip will be the first by a South Korean leader to India since 2004. Following his meeting with the Indian leadership, Lee will ink memorandums of understanding on inmate repatriation, information and technology cooperation, and partnership in space exploration.

He may also visit South Korean firm Posco's proposed plant site in Orissa where the steel major will set up 12 millions tons per annum steel plant at an investment of Rs 51,000 crore. Also on the agenda is a civilian nuclear deal with New Delhi.

Media reports said earlier this week that South Korea's state-owned Korea Electric Power Corporation is keen to sell its reactors to India at very competitive prices. KEPCO, with its installed capacity of 17716 MWe as of the end of 2008, also ranks sixth among world's nuke powerhouses.

Hero of the environment, and of a nation 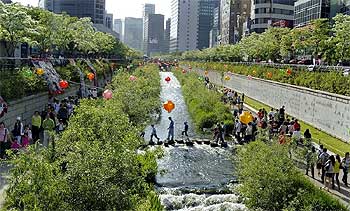 Image: The transformed view of the once-polluted Cheonggyecheon stream

Meanwhile, even as he went about powering Seoul's financial and infrastructural growth, Lee never sacrificed environment at the altar of development.

His efforts to restore the Cheonggyecheon stream earned him the distinction of being a 'Hero of the Environment' from the Time magazine in 2007.

He told Time, "When the Korean economy was just trying to get back on its feet after the war, having parks was a luxury. But now we try to achieve a balance between function and the environment, and we try to put the environment first."

Finally, for your information, the South Korean President has a declared personal fortune of 35bn Won ($37mn or Rs 169 crore).