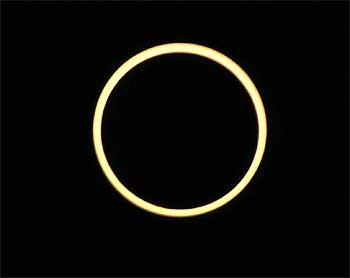 The longest solar eclipse of this millenium was witnessed by a huge crowd at Dhanushkodi, in Tamil Nadu. Dhanushkodi is only 18 kms from Thalaimannar in Sri Lanka. The center line of the eclipse was at sea. Astronomers, students, tourists assembled  in Dhanushkodi to get the best view of the event.

The eclipse started at 1100 and lasted till 1500 in the afternoon. The maximum shadow was achieved at 1317 and the sun was seen as a circular line of fire for the next ten minutes. The year 2010 started with an eclipse. Today, January 15th was the second. The year would witness two more eclipses.

The Pragjyati Astronomers Association of Guwahati and the Guwahati Planetarium had sent 5 members to Rameshwaram to witness this celestial phenomenon. The team was led by Professor Anil Kumar Goswami, a former principal of Cotton College Guwahati.

Goswami said, "We chose Rameshwaram because it is closer to the path of the Eclipse. When the ring of fire is visible, we will be looking for granular beads which are seen because of the uneven surface of the Moon. A few moments before and after the maximum shadow there is a possibility of seeing shadow bands. These are caused by differential refraction due to the different layers of the atmosphere."

'An eclipse is essentially a play of shadows' 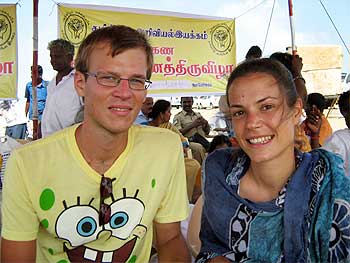 Lucas Fuchs is from Vienna, Austria. where he works at the Vienna Planetarium and Observatory. He has studied Astronomy and flew to India to witness the eclipse.

Reka Harvath, a mathematics student from Austria, said, "I want to see how the birds, animals and people react to darkness in the daytime. We will be seeing how the moon crosses between the Sun and Earth and darkness reigning for ten minutes. It will be a chance to see the movement of the sun, the moon and what part we play in the universe."

Shishir Deshmukh, secretary of the Aakashmitra Mandal, Mumbai, brought 65 members to Dhanushkodi to photograph the eclipse. "We came here to witness the eclipse and also to tell people that there is nothing scary in an eclipse. There are too many superstitions attached to what is essentially a play of shadows. Nothing evil is going to happen. It occurs because of the orbital path of the moon and the earth, where the sun is the source of light."

The Tumkur Science Center came carrying lots of food. Once the eclipse started they started served food to each other. They sat down on the sands of Dhanuskodi and had a merry picnic. One of their members, Madhusudan Rao said, "We want to remove the superstition that people should not eat during an eclipse."

'An eclipse poses danger to the gods' 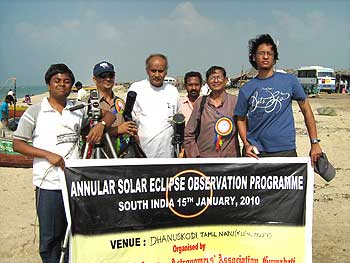 Thousands of Hindus took a dip in the River Ganges during the solar eclipse on Friday to ward off the "evil effects" of the celestial phenomenon. In Varanasi, devotees offered water to the sun and took a dip in the Ganges, while priests and ascetics prayed and fasted.

"The significance of the fast is that one is not supposed to talk before taking bath. We wake up in the morning and without talking to anyone, we come here on the river bank to take a dip, and only after that we can talk," explained Amit Singh, a devotee. In Allahabad, at the confluence of the Ganges, Yamuna and mythical Saraswati rivers, devotees bathed in the holy waters to purify themselves.

A devotee said that the eclipse posed a danger to the gods, and pointed out that offering prayers and taking a dip in the holy river warded off the danger."It is believed that an eclipse poses danger to the gods. So, today, we have come here to take a dip in the holy river, and to offer prayers in order to help our God from the danger of the eclipse," said Balakdas Tyagi. 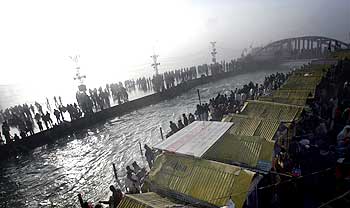 Hindus believe a dip in the holy rivers during eclipses saves them from the wrath of evil forces and brings prosperity in life.

According to scientists, the best place in India for viewing the annular eclipse is between Kodanda Ram Temple near Hampi town in Karnataka, and Dhanushkodi in Tamil Nadu.The duration of this eclipse is said to be the longest so far, and won''t be exceeded for another 1000 years.

The eclipse over shadowed the Kumbh mela 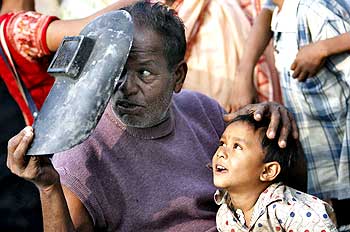 The otherwise bustling Maha Kumbh Mela in Haridwar has come almost to a complete standstill on Friday due to the solar eclipse with doors of temples shut and the devout taking to meditation to ward off what they believe to be an inauspicious period.

The ghats, which witnessed several thousands of people taking a holy dip on the occasion of 'Makar Sankranti' on Thursday, are now playing host to people performing 'havans' or those meditating. The enchanting spell of vedic hymns, bells and conch shells, which reverberated throughout the day on Thursday, when the Maha Kumbh began, can no longer be heard.

The only sound that seems to echo at the main bathing ghat 'Hari Ki Pauri' is the cold water of Ganga flowing strong and hitting against the stone steps.

The eclipse generateda lot of interest 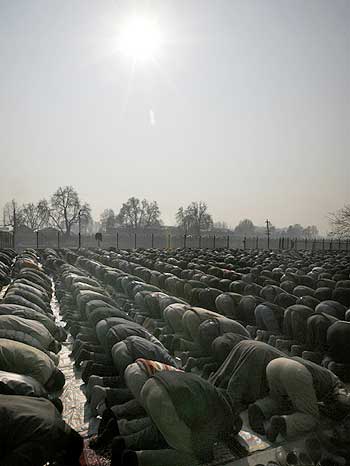 In Varkala town in neighbouring Kerala, located on the edge of the eclipse path, a team of astronomers photographed the event using three telescopes. Notwithstanding efforts by science associations and rationalists to remove scare among the people based on superstitious beliefs, major temples remained closed throughout the country and people thronged holy rivers for a ritual bath to wash away their sins at the end of the four-hour-long astronomical event.

The eclipse was closely studied by scientists 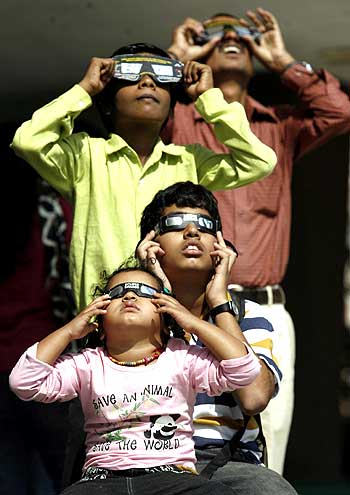 It was also significant since the obscuration of the Sun during the eclipse was exceptionally long, about 11 minutes and eight seconds, providing an opportunity to study, perhaps for the first time, the eclipse induced effects in the noontime equatorial region, the officials said.

In Kanyakumari, the eclipse was watched by a team of six scientists from the Indian Institute of Astrophysics.