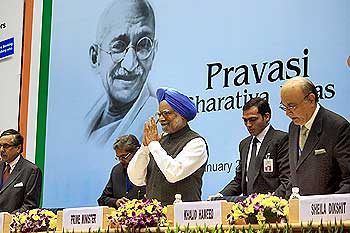 Reaching out to the Indian Diaspora while inaugurating the Pravasi Bharatiya Divas celebrations at Vigyan Bhavan in New Delhi, Prime Minister Manmohan Singh on Friday invited them to 'actively' participate in the country's economic development and join politics while hoping that they would get voting rights by the time of next general elections in 2014.

He noted that the country was expecting 7 per cent growth this year despite the 'unprecedented' financial crisis and was hopeful about return to sustained 9-10 per cent growth in a couple of years.

"We seek the active involvement of the overseas Indian communities in accelerating the pace of our economic and social development. In this context, it is important that we make efforts to connect the second generation of overseas Indians with their ancestral heritage and involve them actively in Indias march forward," he said inaugurating the Pravasi Bharatiya Divas celebrations in New Delhi.

'They will get chance to vote by next general elections' 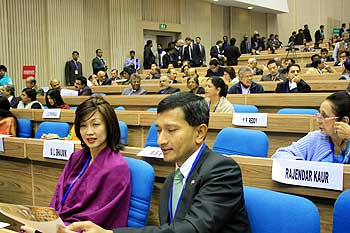 Image: Over 1,500 overseas Indians from 40 countries are attending the event

Singh said he recognises the 'legitimate desire' of Indians living abroad to exercise their franchise and to have a say in who governs India.

"We are working on this issue and I sincerely hope that they will get a chance to vote by the time of the next regular general elections," Singh told the gathering of 1,500 overseas Indians from 40 countries.

"In fact, I would go a step further and ask why more overseas Indians should not return home to join politics and public life as they are increasingly doing in business and academia," he said. 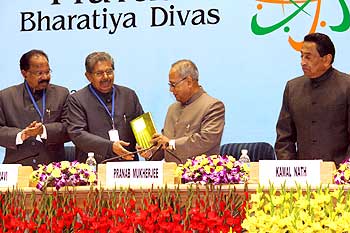 Demanding strict action against those involved in the latest fatal attacks on an Indian in Australia, the government on Friday said it was putting all the 'pressure' on that country to ensure punishment to the guilty.

Minister for Overseas Indian Affairs Vayalar Ravi said India 'has not exaggerated' the incidents and wants Australia to ensure proper safety to its citizens there, who are facing a spate of attacks in the last couple of months.

"We are putting all the diplomatic pressure on Australia so that they catch the culprits of the attacks," Ravi told mediapersons on the sidelines of the Pravasi Bhartiya Divas. 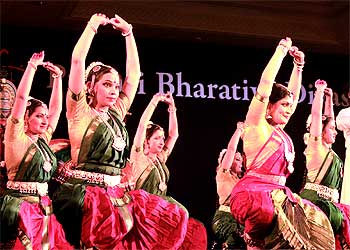 A plethora of issues ranging from cheating by builders to complexities involved in succession and inheritance of properties dominated the first day of the annual Pravasi Bhartiya Divas.

Issues like red tape in approval of investment proposals and bottlenecks in acquiring land for various projects were also raised strongly by the delegates who called for simplifying procedures to facilitate their involvement in India's development.

'Govt has done nothing for us' 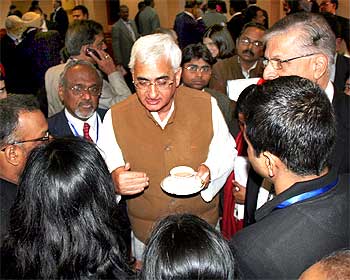 Image: Corporate Affairs Minister Salman Khursheed peaking to some disgruntled overseas Indians at the sidelines of the ceremony on Thursday

A group of Non Resident Indians from the US, the UK, Australia and some Gulf countries strongly raised the issue of non-delivery of flats sold to them by Maytas Properties, the real estate firm promoted by kin of disgraced Satyam founder B Ramalinga Raju.

"More than one year has passed but not a single brick moved into Maytas Hill County in Hyderabad. Over 300 NRIs are trapped in this and the government has done nothing," claimed Srinivas Reddy, an NRI from Britain.

Assuring the Diaspora of all possible help, Ravi, Corporate Affairs Minister Salman Khurshid and Minister of State for External Affairs Praneet Kaur said the government would address all the grievances of NRIs and People of Indian Origin.

'We are serious in addressing the problems of the Diaspora' 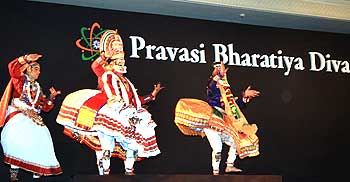 Image: A Kathakali performance during the cultural festival

Addressing the event, Kaur said the government was serious in addressing the problems of the Diaspora which has contributed significantly to socio economic development of India. "The government is aware of the concerns of the Diaspora and doing everything possible to address them. NRIs and PIO are always close to our heart and their problems will always draw our attention," she said.

Later addressing the media, Ravi said his ministry will come out with detailed recommendations of the proposals put forward by delegates and experts on simplifying the procedures relating to property issues. A seminar on nanotechnology was also held on Thursday in which scientists from various countries participated.

The eighth edition of the event has been structured differently this time with a view to provide the delegates with an opportunity to interact with Union ministers and chief ministers.