'We are fighting for the people' 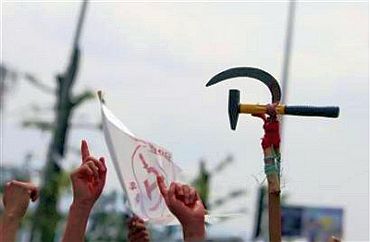 In the first two parts of a 4-part series, Ganapathy talked about the journey of the revolutionary movement. He also alleged that the central government had been using the country's army against its own people on the pretext of internal security.

Part I: 'Maoists have traversed through a torturous path'
Part II: 'Indian army is being used against its own people'

In Part III of the interview, the CPI-Maoist general secretary says that the party is building its cadre base to wage a protracted war with 'enemy' forces.

How would the party deal with difficulties in the formation of the united front?

Firstly, the party would like to become a centre for the country's people and their development, represent their aspirations. We represent over 95 per cent of the population. We are not working for partial reform within the bourgeois and exploitative system. We are fighting for the socio-economic demands of the people as well as for the qualitative change of the very basic structure of the society. If we succeed in clearly explaining it to the people, we will succeed to mobilise them in the war and win.

How do you intend to win over friends?

At present several forces are lined up against the enemy. We need to firmly stick to our strategic goal, and for that, tactically, we need to remain flexible.

More clearly, there are two different kinds of united fronts; (1) between people, and (2) between people and enemy (a section/group/persons from enemy classes) using the contradictions among the enemy. The Indian Left largely, like the CPI and the CPM, trailed behind the bourgeoisie and degenerated.

'We have to intensify and expand the guerrilla war' 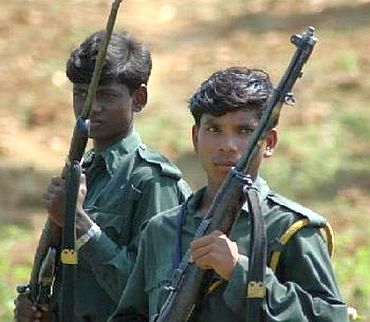 Each class has a separate interest and a worldview. The united front in this sense is also a struggle front. But overall, if the struggle is against the main enemy, then this struggle becomes secondary and unity becomes primary. The real issue is how this struggle and unity can be balanced and used effectively. The enemy classes will never side with the people. Even after the seizure of power, struggle will continue within the society for a long time.

The united front and class struggle has to continue simultaneously. For that it is of utmost importance to concentrate on the ideological and political education of the masses. If we can do this successfully, then we can win-over those sections too and allow them to join our ranks. These parties also have people under a corrupt leadership. If we can win over the people through political and ideological struggle, we can bring in a large number of their primary membership. A revolutionary breakthrough is linked to this process.

The Chinese and Nepalese parties have developed through leaps and bounds by doing the same. Both the cadre as well as the army can expand through this politically and ideologically. If this dialectical relationship between the united front and the political and ideological struggle can be handled carefully, we will succeed in forming a strong united front and isolate the main enemy.

We recognise that we are a small party still. But our real strength lies in Marxist ideology, the classes it represents, its line and policies. If we keep to the interests of the masses and use both the mass line and class line correctly, we will definitely succeed and develop from a small force to a big national force.

But, practically, how do you do it?

I talked about our strength even while we are physically small. We need a powerful army and strong mass base along with strong party. This is practically a must. Otherwise, no matter how strong we are ideologically, it would lead to failure. So, we have to grow.

Second, while waging a guerrilla war in Andhra Pradesh, we faced setbacks. However, we have not completely abandoned operations there. From Godavari valley (in Andhra Pradesh) to Maharashtra, Orissa, Bihar, Jharkhand to West Bengal border -- we have to intensify and expand the guerrilla war.

'Our guerrilla army must evolve into a regular army' 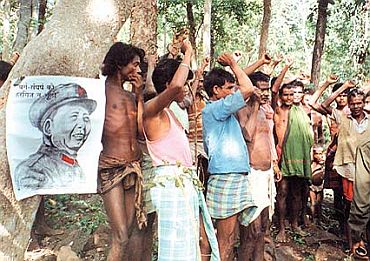 Our forces must resist the enemy. At present, we utilise the tactics of hit and run. We have to evolve our guerrilla war into a mobile war; our guerrilla army into a regular army.

Our strength lies in the people. The enemy will strive to limit us to armed confrontation only. And they want to restrain us to a limited area. They are dividing our areas into various sections and encircling us. But we can also chase them from their base camps like honeybees by mobilising the people.

In areas where the enemy camps are located, even in those villages, we have Revolutionary People's Committees. So even as the enemy is splitting our masses, we are trying to expand our base and encircle the enemy camps/bases. We have to keep in mind the strategic importance of a guerrilla war.

They decided to bring and deploy the Rashtriya Rifles (A special contingent of the Indian Army's counter-insurgency force) from Jammu and Kashmir. But between Lalgarh and Surjagarh, there live crores of people. If we succeed in actively mobilising the masses to fight back the enemy forces, we can make this very war a basis for revolutionary change.

It is definitely a challenge before us but we are confident that there is an advantage in the long run, which cannot be achieved in a short period. But unlike what the enemy wants, to finish this in a short period, we want to stretch this war and transform the situation to our advantage favourable to the revolution.

The government is building Gram Suraksha Samitis to fight the so-called anti-socials and thereby doing their best to contain us. But people are inviting us. Even new, less experienced cadres, who are meagrely armed, are being asked to visit these areas by the people.

For example, in Sonebhadra in Orissa, the villagers invited us. We expanded from Raigad (in Maharashtra) to Nayagarh (in Orissa) in the form of Operation Ropeway in as little as 8-10 months. The Nayagarh raids (during which police arms depots were targeted) not only had military significance but also political significance, as there were strategic reasons behind the raid.

Then, Operation Vikas was undertaken to expand into Manpur (Chattisgarh) area in the plains. If we expand in this manner, we will grow definitely and in the longer run political and economic situations are bound to change. The state will crumble under pressure. Presently, the state is wilfully spending in military expenses. But as the war stretches and expands into newer areas, it will spend more on a losing battle. We are waging our war with this strategic plan.

'If intellectuals unite, it will be a shot in our arm' Initially, there was a lot of support among the urban intelligentsia. Now, depending upon the enemy's onslaught and the nature of the struggle, there will be a change in the reactions to the support base. Some people may also go over to the opposition side of the Lalgarh movement.

In Bengal, our influence in the civil liberty groups and in urban areas is not strong enough. We need to strengthen our work in urban areas. A lot would depend on our work there and the development of the Lalgarh movement. There is a lot of difference between working among the basic masses and working among intellectuals, as the latter involves several complex factors.

In this context, if the intellectuals unite around any issue, even that of UAPA, it would be positive for us. Those who cannot directly support the violent phases of the movement can come together on other issues. So, demands may change but these must be slogans of the people. The party will definitely take positive criticisms from any quarter of people -- even those who may not agree with our basic line, but stood up for the people.

'We endorse all fundamental rights' 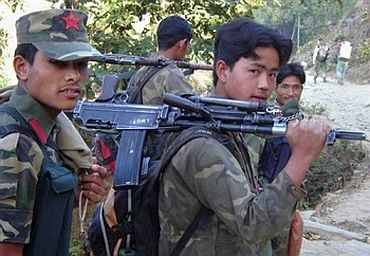 Where do you place democracy -- with regard to the right to strike, right to dissent, and the right to freedom of expression -- in the working of the party?

We need a new democratic state in which other than landlords and imperialists all others will have real or genuine freedom.

In accordance with the above, we endorse all fundamental rights, including that every voter has the right to recall any elected person. He or she even has the right to take anyone in position of authority, who works against the interest of the people, to court.

According to our constitution, no physical punishment for political opposition will be allowed; anybody has the right to politically differ and even unionise. The Indian state is trying to control dissent and therefore people want revolution. We would not repeat the same mistake. Besides, for any mistakes in prosecution, the person has the right to appeal to the village Revolutionary People's Committee, to higher levels and even to the party.

For instance, in one of the extension areas, there was an incident where in collusion with the Inspector General of Police, 33 members belonging to two villages became agents of the enemy. In this context, our comrades went and handled the issue. While villagers wanted to give capital punishment to the main agent of the police, the party interceded to give a chance to that person to realise his mistake.