Sign in  |  Create a Rediffmail account
Rediff.com  » News » BJP goes all out to woo Dalits at national meet

BJP goes all out to woo Dalits at national meet 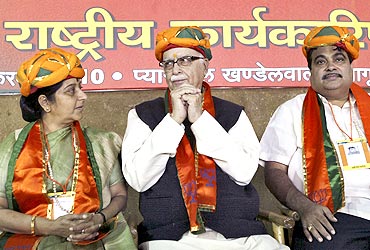 Aimed at broadbasing support for it, the Bharatiya Janata Party has gone all out to woo the Dalit community, with party president Nitin Gadkari invoking B R Ambedkar in his presidential address at the national council in Indore and making a special mention of disgraced former party chief Bangaru Laxman, who belongs to the Scheduled Caste.

"Dr Ambedkar was a true humanist who gave voice to the voiceless. His life best teaches the values of social justice and samajik samarasta (social cohesion). I offer my homage to this towering leader of all of us," he said at the BJP national council which began its two-day meeting on Thursday.

Soon after landing in the city on Tuesday, Gadkari, 52, had directly gone to Ambedkar's birthplace Mhow, to pay tributes to the Dalit icon. He also stopped on the way to Indore, at the home of Dalit BJP Corporator Preeti Karosiya, to have lunch.

The symbolism of both these acts has not been lost on the people and the party cadre.

The return of Bangaru Laxman 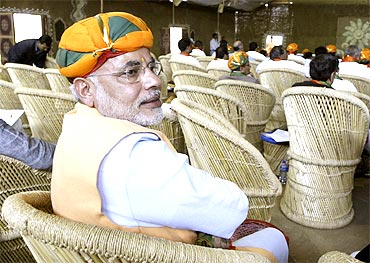 Both Gadkari and his predecessor Rajnath Singh made a special mention of Bangaru Laxman in their speeches on Thursday. This is the first time since 2001 that Laxman has been given prominence.

After he was caught on camera accepting a bribe of Rs one lakh from Tehelka journalists posing as arms dealers, Laxman had to step down as BJP president.

Gadkari has declared that his aim is to raise the BJP's vote share by 10 per cent to help it come back to power at the Centre. To achieve this, the BJP will woo Scheduled Castes, Scheduled Tribes, Other Backward Classes and Minorities, he maintains.

The new president has even invited criticism of copying Congress leader Rahul Gandhi, who has been visiting Dalit homes, sharing meals with the family and spending the night in their houses. Gadkari seems to be striving hard to match Rahul Gandhi and compared Ambedkar with US civil rights activist Martin Luther King at the national executive on Wednesday. 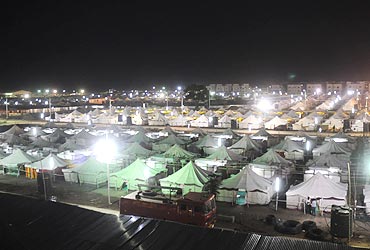 Image: The tents in which most BJP leaders are staying at Indore

"Gadkari said the way in which Martin Luther King struggled in the US for the rights of blacks and got them an honourable place, the same was done by Ambedkar in India. Ambedkar fought for social justice and made an enormous contribution in bringing social equity in society," spokesperson Ravi Shankar Prasad said, quoting the BJP chief.

The comparison of Ambedkar to King, who made the famous "I have a dream" speech on equal rights to blacks living in the US, would come as a surprise to many.

The BJP's core votebank has been the upper caste and the trader communities. By wooing the Dalits, Gadkari may also be aiming at rural votes, as the party's vote-bank has primarily been urban.

The BJP clearly seems to have jumped on the bandwagon, along with the Congress and the Bahujan Samaj Party, to woo the Dalits.