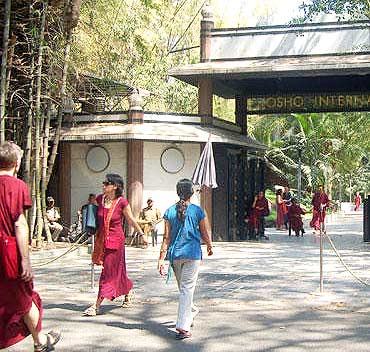 Image: The main gate of the Osho Ashram located at lane number 1 in Koregaon Park, Pune

Terrorists determined to launch an attack or plant a bomb at Pune's Osho Ashram can easily do so because of lax security arrangements, claims a private security marshal handling the security setup at the main gate of the ashram at lane number 1 in Koregaon Park, barely 100 metres from the German Bakery where a powerful bomb explosion on February 13 killed nine people and injured 60 others.

Despite intelligence reports that terrorists had plans to bomb the Jewish Chabad House located close to the German Bakery and the Osho Ashram, only three policemen and two security marshals were posted at the main gate of the ashram.

Under terror crosshairs ever since American terror suspect David Coleman Headley visited the ashram twice in 2008-09, the ashram authorities have failed to beef up its security, a favourite haunt of foreign tourists who come here in search of peace.

Image: The main gate of the Osho Ashram located at lane number 1 in Koregaon Park, Pune

All fingers point towards Lashkar involvement 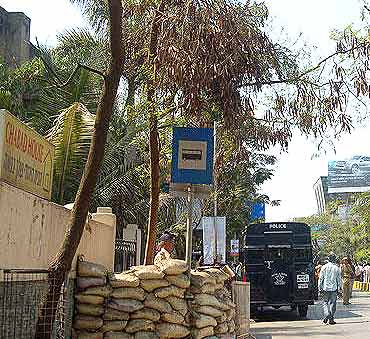 According to intelligence sources, the bomb explosion at the German Bakery had Lashkar-e-Tayiba footprint written all over it: attack a place frequented by foreign tourists in large number (26/11 attack on Cafe Leopold), attack places associated with Jewish assets, German Bakery being in the near vicinity of Pune's Chabad House (Lashkar terrorists attacked Chabad House at Nariman Point, Mumbai) and the link of Lashkar operative David Headley, the alleged mastermind in the 26/11 terrorist attacks.

In fact, the ashram authorities and the city's police establishment are still to wake up from their reverie a day after (we visited the place on February 14) the bomb blast at German Bakery.

Image: Chabad House, barely 50 metres away from the German Bakery on the same road in Koregaon Park 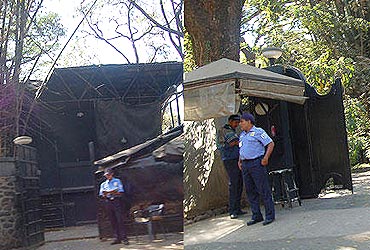 "The more things change the more they remain the same at Pune's Osho Ashram as far as security is concerned," says this source closely associated with monitoring tourists and providing security at the main gate.

He said that once foreign guests clear security and get a gate pass, they are not at all frisked at the main gate. They just show their passes and make their way into the ashram.

"Anybody with bad intentions can easily sneak in a bomb inside his bag," said the source.

"Do you think this lax security arrangement is enough to deter a terror attack if such an attack is ever planned?" he asks, pointing towards the cops posted outside the main gate of Osho Ashram.

All his pleas on earlier occasions to the authorities at the ashram to improve the security apparatus were ignored, he told rediff.com, requesting not to name him for this story. Most of the ashram's private security marshals are sourced from various wrestling akhadas in the city, he informed.

To prove his point he asked rediff.com correspondents to recce the rear gate of the ashram in lane number 2, apparently the most famous street in Koregaon Park, since construction tycoon Shapoorji Pallonji Mistry's palatial mansion is located at the same lane.

Shockingly, only one private security guard was posted at three different gates on the rear side of the ashram (see picture).

"This makes it the most vulnerable spot," the security marshal said.

Image: Just one guard each outside the rear gates at the Osho Ashram.