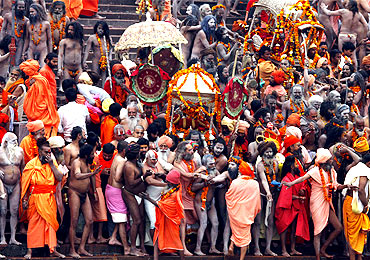 Image: Sadhus wait to take a dip in the waters of the Ganges river during the Kumbh Mela in Haridwar
Photographs: Reinhard Krause/Reuters
Security has been tightened in Haridwar for the first day of the Shahi Snan (Royal Bath) on Friday, as thousands of devotees are expected to take a dip in the River Ganga to mark the festival of Maha Shivratri. Around 10,000 security personnel have been deployed in Haridwar to thwart any kind of untoward incident when devotees, including ash-covered Naga sadhus participate in the festivities.

Haridwar Director General of Police Alok Sharma said, "For the Shahi Snan security, we have deployed around 10,000 police officials who will work in two shifts. At one point of time, around 5,000 to 6,000 police officials will be on guard." The general public took the holy bath from midnight, while the 13 akharas (sects of holy men) took the bath at 1100 hrs on Friday. Har Ki Pauri will be shut for the general public from 11am to 6pm, when holy men of various sects will take a dip in the holy Ganges.

The next two Shahi Snans will take place on March 15 and April 14 respectively, on the occasions of Somawati Amavasya (new moon night) and Baisakhi (harvest festival). Maha Shivaratri is a festival celebrated every year on the 13th night/14th day in the Krishna Paksha (waning moon phase) of the month of Maagha or Phalguna in the Hindu calendar. The festival is principally celebrated by offerings Bilva leaves to Lord Shiva and fasting. 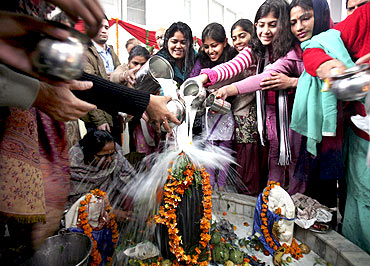 Image: Women pour milk over a Shivling during the Mahashivratri festival in Chandigarh
Photographs: Ajay Verma/Reuters
Scores of devotees thronged Shiva temples at Rajamhundry in East Godavari district to offers prayers on the occasion of Maha Shivaratri. Serpentine queues were witnessed since early hours at the famous Samarkota, Draksharamam, Kotipalli, Palkole and Pithapuram temples in the district.

Special poojas including Rudra-Abhishekams, Billva Arachanas were performed on the occasion. In Rajahmundry, the famous Markendayya Swamy temple on the banks of river Godavari was flooded with devotees since the wee hours.

All six bathing ghats on the Godavari saw huge crowds with special religious programmes including Harikathas, spiritual discourses being arranged on the occasion amidst tight security arrangements. Temple authorities have made special arrangements for fasting devotees, who will observe a Jagaran (staying awake) and will only eat on Saturday after a darshan of Lord Siva.

Mahashivratri symbolises the marriage of Shiva and Parvati 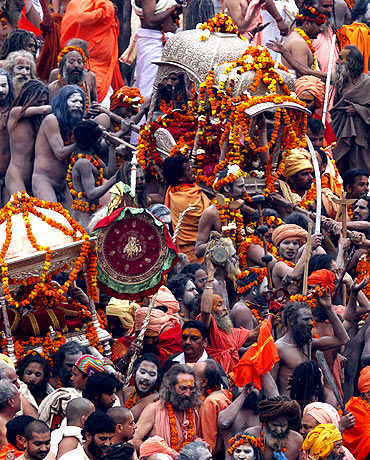 Image: Sadhus carry palanquins to the banks of the Ganges in Haridwar
Photographs: Reinhard Krause/Reuters

Delhi also celebrated Mahashivratri with great fervour with devotees thronging Shiva temples since early morning to
offer prayers. The faithful were seen waiting in long, serpentine queues to pour milk and Gangajal on the shivlingams.

Most women fast on the auspicious occasion, which also symbolises the marriage of Shiva and Parvati. In several areas
of the city, devotees also participated in Shiva's marriage procession .The devotees believe that offering prayers to Shiva on
Mahashivratri brings prosperity and happiness.

AGENCIES
Print this
article
MOST
RECENT