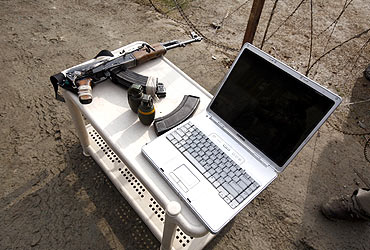 Sopore -- known as the 'apple town' of Kashmir -- is fast gaining notoriety for becoming a safe haven of terrorists, especially of Pakistan-based Hizbul Mujahideen and Lashkar-e-Tayiba, as it has seen a sudden spurt in violence during the last six weeks.

Tuesday's targeted killing of Mohammed Yusuf, head constable of Jammu and Kashmir Police, was an eye-opener for the authorities. Sources say nearly 30 to 40 militants are present in this north Kashmir town.

The terror groups Lashkar and Hizbul in this region are operated with active support of some overground workers, as the area has a domination of Jamat-e-Islami workers who are associated with pro-Pakistan separatist leader Syed Ali Shah Geelani. 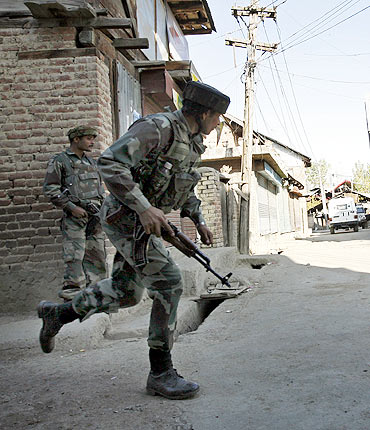 Image: A soldier runs during a gun battle with militants in Sopore
Photographs: Danish Ismail/Reuters

The town earlier saw militants digging a road and planting an improvised explosive device inside a water supply line.

This was followed by gunning down of four Central Reserve Police Force personnel in Watlab Bandipore area on the outskirts of Sopore.

There has been a pattern of targeted killing of police officials in the area in which information to militants is suspected to have been provided by the local overground workers of the terror groups.

Mohammed Ashraf Ganai, local National Conference MLA, says he would be holding talks with local-level workers to restore confidence in the administrative system while police were also planning to launch an offensive there soon.

© Copyright 2022 PTI. All rights reserved. Republication or redistribution of PTI content, including by framing or similar means, is expressly prohibited without the prior written consent.
Print this
article