If words could generate electricity in India... 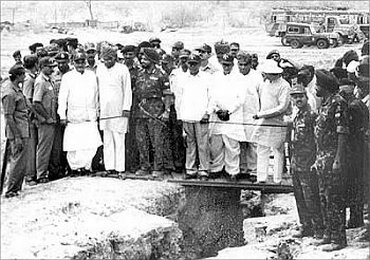 Image: A file photograph of then Prime Minister Atal Bihari Vajpayee and Defence Minister George Fernandes at the site of the nuclear test in Pokhran

For a country whose national capital has routine blackouts in its poshest colonies, not to mention the rest of the country, the debate on the advisability of nuclear power is bizarre, says Sanjaya Baru

"Then you should say what you mean," the March Hare said. "I do. At least I mean what I say -- that's the same thing, you know." Said Alice. "Not the same thing a bit!" said the Hatter.

India's nuclear programme was built on saying one thing and meaning another. Peaceful nuclear explosion was India's contribution to the world's famous oxymorons. When that duplicity was ended, some chose to forget the words they uttered, others uttered words they would rather forget.

For a people whose civilisation and culture are rooted in the oral tradition, for a nation whose written Constitution has been amended 94 times, Indians have become strangely obsessed with the written word. Combine comfort in the book with obsession with text and you get a legalistic mindset for which one word seems to make the difference between sovereignty and enslavement.

In the history of India's nuclear programme, only three truths have been uttered. The first by Homi Bhabha, who sought a nuclear energy programme that he himself later sought to extend into a nuclear weapons programme. The second by Atal Bihari Vajpayee who declared India a nuclear weapons power, bringing to light a programme for weaponisation that was authorised secretly by Rajiv Gandhi in 1989. The third by Manmohan Singh, who has sought separation of the military and civil programmes to enable the further development of both.

If words could generate electricity in India... 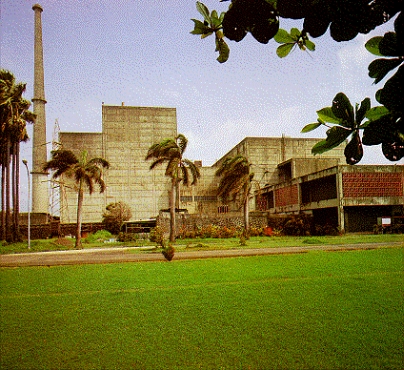 Each of them focused on deeds, not words. The end Dr Bhabha sought was to create indigenous nuclear capability in India. The end that Mr Vajpayee sought was the normalisation of India's nuclear weapons status, in response to the nuclearisation of both China and Pakistan, with the former being responsible for the latter's capability. The end Manmohan Singh has sought is to secure de facto recognition of this status from the community of nuclear fuel and equipment suppliers so that India's civil nuclear energy programme can be developed.

Each of the dramatis personae has used words to achieve stated and specific ends, but none became a prisoner of words. But theology is important for people of the book, those who quote and thrive, in the world of strategic policy. In the real world, it is outcomes not intentions that matter.

In each case, the outcome for India has been good. Dr Bhabha's words enabled him to achieve an end that has strengthened India, overcoming Jawaharlal Nehru's reticence. Indira Gandhi's PNE fudge enabled India to develop a programme against odds. Rajiv Gandhi's disarmament call helped him hide the weaponisation decision. Vajpayee's words made the world wake up, but softened the impact of sanctions. Dr Singh's words are aimed at enabling India to attain a new level of not just military security but also energy security -- together the two are pillars of the nation's developmental security.

The issue today before the Indian Parliament is not what a Bill on civil liability for nuclear damage should say. The issue is what purpose should that Bill serve. As nuclear policy analyst G Balachandran wrote so eloquently a few weeks ago, this Bill is relevant only if India seeks to import nuclear power equipment from as many suppliers as are available, that is Russia, France, US, South Korea and Japan. If India does not want imported technology, then it might just as well forget the Bill.

The case for civil nuclear energy development has been well made. For a country whose national capital has routine blackouts in its poshest colonies, not to mention the rest of the country, the debate on the advisability of nuclear power is bizarre. If words could generate electricity, India would never have load-shedding! 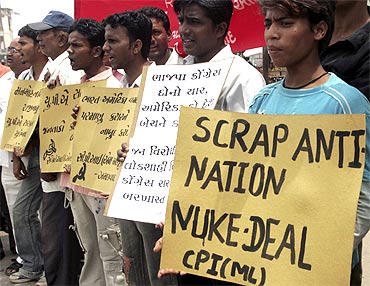 It is a pity, however, that the case has not been well sold. Attempts at deliberate sabotage from within by a clutch of Cold War dinosaurs, isolationists, seekers of protection and privilege, the utter incompetence of mediocre ministers and bumbling bureaucrats, the brinkmanship of a desperate Opposition, and the strange coalition of nuclear hawks and doves have all combined to help generate controversy where there should have been celebration.

Balachandran summed up the choice succinctly when he wrote: "If it is felt that India's long-term energy security will require substantial reliance on nuclear power, and that plans to have that will be realised in a shorter period with imports of reactors and equipment, then any Indian Bill that goes beyond the norms of international conventions in assigning supplier liability will result in denial of reactors and nuclear equipment by foreign suppliers, and hence will be counterproductive. This is an absolute bottom-line condition as of today. As a major nuclear supplier in future, India will do well to influence changes in this. Today, however, it cannot do so. Therefore, changes in supplier liability need to be carefully drafted."

Those who argue that if India can get imports from Russia under existing laws and commitments, it should not bother what others, especially US suppliers, think miss out two important points. First, when Russia becomes a member of the World Trade Organisation, which it wants to desperately, it will no longer be able to secure a special supplier status. Indian laws cannot then discriminate between one WTO member and another.

Second, India's ability to develop its civil nuclear energy programme is a direct result of the Nuclear Suppliers Group waiver it secured, thanks to the support and diplomacy of the US government. Even in international relations, there is something called gratitude, and the US could well say to India, as did Eliza Doolittle to Freddy Eynsford-Hill, "Words! Words! Words! Don't talk of love, show me!"