September 2 will mark the first death anniversary of Andhra Pradesh chief minister Dr Y S Rajashekhara Reddy, who died last year in a helicopter crash. But that may also be the day of the final showdown between his son Jaganmohan Reddy and the Congress high command.

The divisions in the ruling Congress is obvious from the fact that both factions have organised separate programmes to mark YSR's death anniversary.

The state government and the Congress have already planned major events on September 2, including the release of postal stamps in YSR's honour and the inauguration of the YSR Smrithi Vanam at Pavurala Gutta, where the chopper crashed.

But Jaganmohan has decided to stay away from all government programmes. He will pay homage to his father's shrine in his home town of Pulivendala and then address a rally at Tirupati. Interestingly, the posters for the rally show neither Chief Minister K Rosaiah nor Congress president Sonia Gandhi.

'Every move by Jagan has been countered' But the state government claims that the state Congress is not headed for a split.

"Jagan has oraganised personal programmes and that is entirely his decision. It is not as though the YSR family is opposed to the Congress," said a party leader.

But leaders close to Jaganmohan have alleged that the state government has organised a separate set of programmes in spite of knowing about the Kadappa Member of Parliament's plans for the day.

"Every move by Jagan has been countered by the state government. When he started his yatra, his opponents were worried that most legislators will join him, so an assembly session was convened to coincide with it," said a source close to the leader.

He added, "Jagan had announced his plans for the death anniversary beforehand. The state government should have joined him since he is the son of the late leader. They chose to ignore what Jagan had planned and decided on holding a parallel programme." 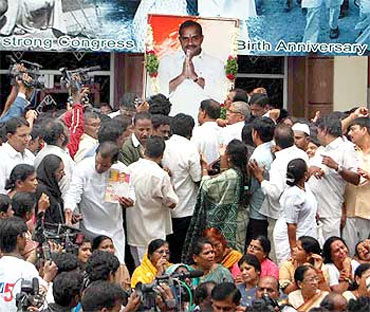 Congress sources in Andhra Pradesh say that there is no clear indication of a split and both factions are avoiding the subject. The Rosaiah faction is allegedly trying to send out a message by suspending certain leaders considered close to Jaganmohan, while the young leader has chosen to adopt a strategy of non-cooperation towards the state government.

The chief minister currently enjoys the full support of the high command.

But he is aware of the fact that at least 60 members of the legislative assembly support Jaganmohan and a split in the party's state unit will signal the end of the government in Andhra Pradesh.

Both factions are reportedly under a lot of pressure to reach a compromise, since none of the leaders are willing to face fresh elections.

According to party sources, the party high command will not take a decision about the simmering situation till YSR's death anniversary. After that, Sonia and co. have to take a definite decision to resolve the bitter feud in the state Congress.