Sign in  |  Create a Rediffmail account
Rediff.com  » News » In Bellary, Sushma dreams of a BJP govt in Andhra

In Bellary, Sushma dreams of a BJP govt in Andhra 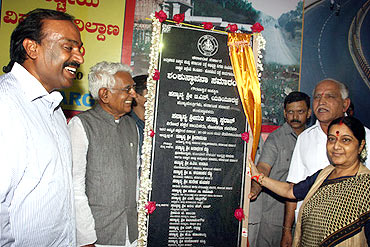 Image: Karnataka CM BS Yeddyurappa (right) and Janardhana Reddy(Left) flank BJP leader Sushma Swaraj as she lays the foundation of the Bellary development scheme
Photographs: Jagadish Kurugodu Vicky Nanjappa
After the Congress held a mega rally in Bellary to protest the illegal mining, the BJP hit back by organising a rally of its own. Vicky Nanjappa looks at the situtaion in Bellary.

it was the turn of the Bharatiya Janata Party in Karnataka to hit back at the Congress and in a bid to do so, it held a mammoth rally in Bellary on Friday. Leader of the opposition in the Lok Sabha,Sushma Swaraj, who was invited by the organisers of the rally, the Reddy brothers said that the biggest dream of the Bharatiya Janata Party was to fly the flag of the party in Andhra Pradesh.

Swaraj said she had come to Bellary on the auspicious occasion of Vara Mahalakshmi 12 years ago and had prayed for the BJP to come to power in Karnataka. "That dream has come true. I come here every year and pray on this day and today in my prayers I have asked for the flag of my party to fly high in Andhra Pradesh. I am sure my prayer will be answered and it is just a matter of time before the BJP forms the government in Andhra Pradesh," she said.

"The Congress is singing a different tune today" 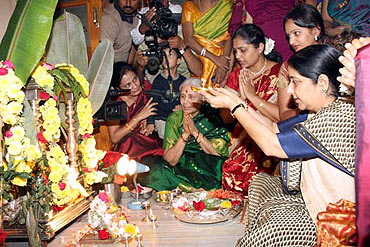 Image: Sushma Swaraj at the Durgamma Gudi temple in Bellary
Photographs: Jagadish Kurugodu
Taking on the Congress over the illegal mining issue, Swaraj asked, " Why is that they have sought the resignation of the Reddy brothers. Have all of you forgotten that it is the same Congress which sought to enter into a pact with the Reddy brothers and take them into the Congress. Why do they sing a different tune today? I know the name of the Congress leader who made this offer and will reveal his name at an appropriate time. The Congress speaks so much about illegal mining, but it is the BJP which has banned the export of ore. The Congress was in power for so long, why is that they could not do it?"

'The Congress has looted the country for 60 years' 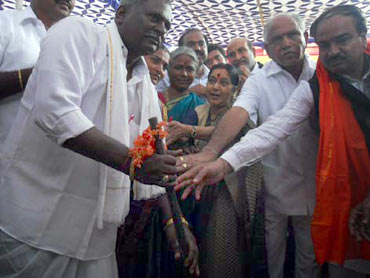 Image: BJP leader Anant Kumar, Karnataka CM BS Yeddyurappa and Sushma Swaraj at the rally in Bellary
Photographs: Jagadish Kurugodu
Chief Minister B S Yeddyurappa struck an emotional note asking why the Congress was calling upon him to step down. "Should I resign for implementing such a successful girl education scheme? Should I step down for banning the export of iron ore? The Congress has no moral right to seek my resignation after looting the country and this state for 60 years," said the CM.

"I have decided to undertake a mega rally in September. It will be a government sponsored rally and will comprise the beneficiaries of the girl education programme (the Bhagya Lakshmi scheme). Around Bellary, there are about 50,000 beneficiaries and this rally will be unique in nature," Yeddyurappa said.