In Hyderabad this Ramzan? Try the Haleem 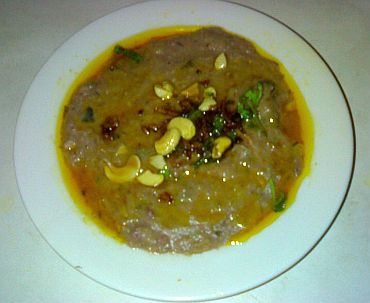 Ramzan is the time to be in Hyderabad to savour its own signature dish, the haleem, says Mohammed Siddique.

Muslims around the world are observing Ramzan. And if you happen to be travelling during the holy month of fasting, Hyderabad is the place to be in.

The cultural ethos of Hyderabad goes beyond the famous Charminar and the Mecca Masjid. Come Ramzan and the buzz around the bazaars in the city is obvious.

Thousands make a beeline at numerous eating joints, irrespective of size, to grab a plate of Haleem, the famous syrupy delicacy of Iranian origin made from the three Gs -- gosht (mutton), ghee (clarified butter) and gehoon (wheat).

Haleem, which arrived in Hyderabad during the reign of the Asif Jahi rulers -- the city's founders -- and reached its prime under the Nizams, is now an unalienable part of the delectable Hyderabadi cuisine.

'It is Allah's gift to nourish the devout' 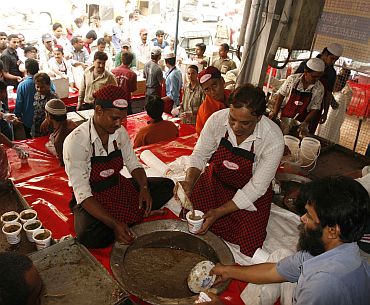 However, as per a peculiar Hyderabad tradition, the Haleem is prepared and sold at a large scale only during the month of Ramzan.

That because "it is Allah's gift to nourish the devout after the day-long fast during which they go without food and water", says Mohammed Rabbani, owner of Shah Ghouse Cafe, one the leading makers and vendors of Haleem in the city.

Far from its humble origin as a housewife's dish, where the mutton was mixed with wheat and rice, Haleem today is a connoisseur's delight with culinary improvements to the dish -- ranging from cream to dry fruits to rose petals to pulses and spices.

"It has jeera (cumin seeds), shah jeera, dal cheeni (cinnamon), kabab cheeni, saffron, pista, kaju (cashew), baadaam (almond), milk, ilaichi (cardamom), laung (cloves) and all sorts of dry fruits. With the dressing of fried onion, green dhaniya (coriander) and what not," says MA Majeed, the man credited with taking the aroma of Hyderabad Haleem to far corners of the world and exporting the dish to the Hyderabadis spread in different countries. 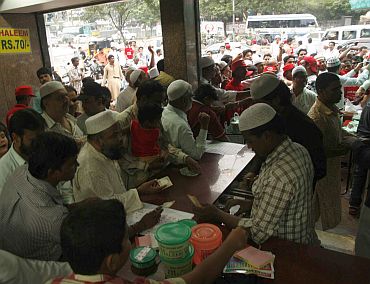 And there are as many varieties of Haleem as there are chefs and leading hotels preparing the dish.

And the range of the dish is mind boggling given the fact that there are hundreds of small and big hotels, roadside eateries and small kitchens that prepare thousands of tons of Haleem everyday during Ramadan.

All of it gets sold in a matter of four to five hours.

As with many other valuable things, it is only few who get the crown and make their own niche and brand with their unique touch to this mouth-watering dish.

In Hyderabad, the mention of Haleem brings the image of a white plate brimming with brown colour gravy, aroma of ghee and garnished with coriander and tali hui pyaaz (fried onions). 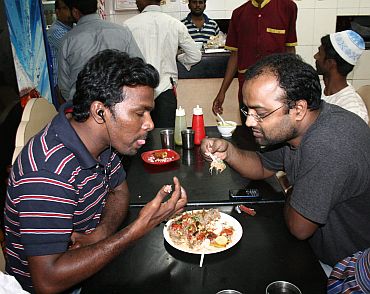 But different brands have different appearances. Take for instance, the famous Iranian hotel 555 in a bylane at the junction of Masab Tank-Banajara Hills. It has its own improvised version of Haleem that includes Chicken 65 and tongue of sheep. Called Special Haleem, the Rs 120 dish is sufficient for two people.

Sarvi Haleem, another famous brand again on Banjara Hills, claims be the only genuine Irani Haleem maker in town and commands a good following.

It is one of those Haleem makers who not only attracts Muslim customers but is also a rage among the non-Muslim foodies.
"It is good. We relish it all. What I like most is that Haleem makers have started displaying the list of ingredients to reassure people like us that only mutton is used," says T Rajasekhar, a software engineer.

But the Mecca of Haleem is in the old city 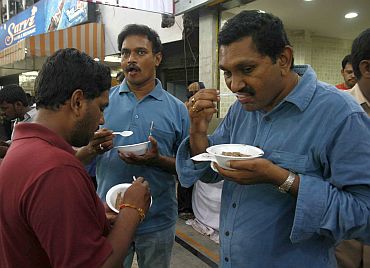 But the Mecca of Haleem is in the old city of Hyderabad where literally hundreds of outlets with thousands of red brick kilns prepare the Haleem through a painstaking process.

And here, big names like Pista House, Shah Ghouse and Shadab rule the roost with their humongous scale of production and sale.

Pista House, which has emerged as synonymous to Hyderabadi Haleem, has brought many innovations to the trade ranging from delivery of Haleem through postal service to now exporting canned Haleem abroad.

So popular is the brand that every year Pista House opens 200 outlets across the twin cities.

Haleem, delivered to your doorsteps 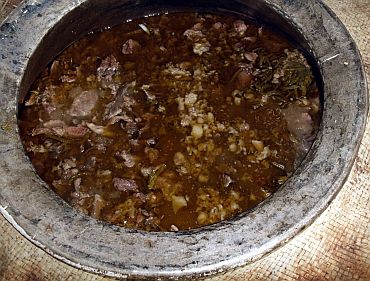 "This year we are door delivering the packs after getting orders through SMS," says Pista owner Abdul Majeed.

But the biggest achievement of Pista House was to rope in Gati Transport and start delivering piped hot Haleem in eight cities across the country, including Pune, Kochi, Coimbatore and the four metros of Mumbai, Delhi, Chennai, Kolkata and Bangalore.

This year, Pista has taken the aroma of the Haleem to Hyderabadis in Dubai, Saudi Arabia and Singapore. To clear the hurdles in the way of exporting Haleem to US and Europe, it has already developed a can-packed version of Haleem with a shelf life of six months.

"This is because Hyderabadis cannot survive Ramzan without Haleem. It is a matter of habit," says Majeed.

'If you are late you will not get it' 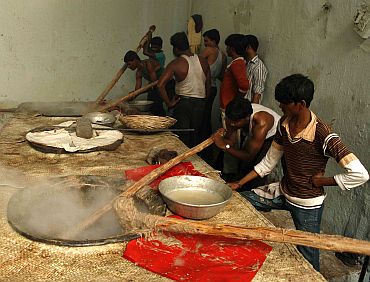 The scale of production is such that 2,500 people work in Pista and it looks like a factory where 200 quintals of mutton is used everyday.

"We cook it on slow flame to make it really tasty," says one of the cooks.

Not far from Pista is the famous Shah Ghouse Cafe on Shah Ali Banda road, which has 35 kilns that prepare about 200 quintals of Haleem everyday.

"It is one of the oldest names in Hyderabad and such is the demand that if you are late you will not get it," says Mohammed Shameem, a regular.

Mind you, it is not easy to reach this part of old city during Ramazan, given the bumper-to-bumper evening traffic in the area.

'A majority if customers are non-Muslim' 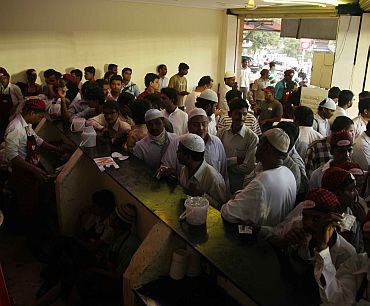 So this is a purely non-vegetarian affair, right?

"Not at all," says Pista House owner, adding, "Keeping in mind other sections, we have also come out with a vegetarian Haleem that is equally delicious."

As the colour and taste of Haleem has improved, so has the profile of the consumer.

"Today, only 30 per cent of the consumers of Haleem are Muslims. A majority is non-Muslim, who keenly await the month of Ramzan," says Farhan Adeeb, an authority of sorts on the Haleem business.

"The burgeoning number of IT workforce in the city has only given further boost to the demand for Haleem." 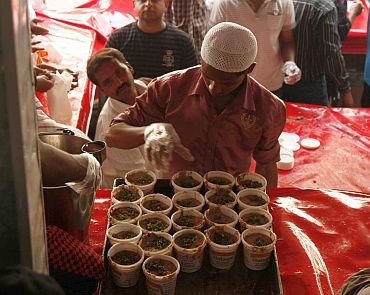 Given the unique position that Haleem enjoys in Hyderabad, the Haleem Makers Association has approached the government of India for a Geographic Indication tag to Haleem on the lines of Kancheepuram Silk and Tirupati Laddoo.

"The process is on and the government of India may grant the GI certificate before the end of Ramzan. After that, Haleem of no other city can claim to be the Hyderabadi Haleem," says S Ravi, a patent expert in Hyderabad.

Last word belonged to Sourab Bannerji, the chief finance officer of Gati. "Haleem, like Charminar is symbol of Hyderabad and it is getting better every year."