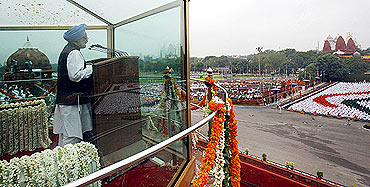 On August 15, Prime Minister Manmohan Singh will address the nation from the ramparts of the Red Fort. He shall do so for the seventh time. Jawaharlal Nehru and Indira Gandhi spoke from the ramparts 17 and 16 times, respectively. The occasion provides the prime minister to do some stocktaking of what his government has done during the past 12 months.

It also is an opportunity to enunciate his vision for the next year. Dr Singh is not given to radioactive verbal incontinence. He is a careful person. He is also a thoughtful realist who has avoided the 'Dr Feel Good' complacency or optimistic vivaciousness.

Neither India nor the world is an orderly place. Attempts to reorganise the whole of life have always failed. Hence, prime ministers have been somewhat guarded in their Red Fort speeches and have avoided high-pitched pronouncements. Another restricting factor is the monsoon session of Parliament. The head of government cannot go into details of what his government has in mind.

That, however, does not mean that Independence Day is a routine ritual. It is not. I know from personal experience the amount of hard work that goes into preparing this particular speech.

A very long way to go 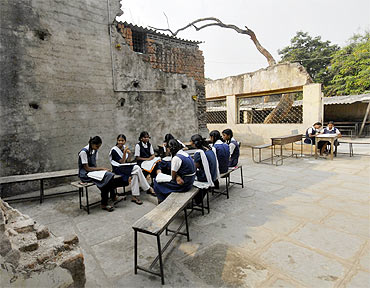 We have been a working, secular democracy for 63 years. During these six decades, much has been achieved. Much more needs to be done. To my mind, our nation state has not done enough in three vital areas. These are: education, health and the judiciary. We all accept that the national and international agendas of 1947 and 2010 are very different.

The fact remains that our educational system needs not evolutionary, but revolutionary overhauling. So do the health and judicial areas. Only the other day, the prime minister and Professor Amartya Sen spoke of the inadequacies that plague the health and educational institutions. "A very long way to go," said the prime minister. No time frame was mentioned. How long is very long?

Except in the IT sector, excellence is generally missing from our schools, colleges and universities. No one denies that our IITs are world class. We need very many more. The unpleasant truth is that almost 35 per cent Indians cannot read or write. The percentage of the illiterates in other developing countries is much lower. Sixty years have not been wasted but reform is the urgent need. Can 'education' be outsourced?

The children suffer the most 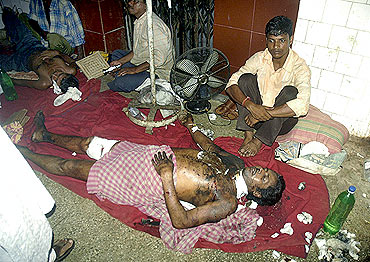 Take health. Leaving out a dozen cities, medical facilities in rural India are dismal. As usual, the poor are at the receiving end. They invariably are. According to the United States Development Programme, eight Indian states have 421 million poor people. Under-nutrition in India is 'twice as high as sub-Saharan Africa'. The children suffer the most. One hundred and twenty million children die prematurely.

Inequality and injustice are rampant in India, that is Bharat. Pending cases in our judicial establishments are mind-boggling. Justice delayed is justice denied, is not a tired cliche. It is a stark reality in India. We just do not have enough judges.

Why do our people accept these inequities? 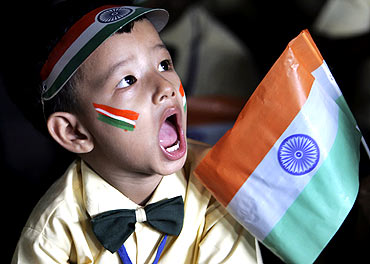 I often ask myself -- why do our people so docilely accept these inequities? Does their not-so-cheerful fatalism make them accept the unacceptable? Their identities are those of a people marginalised. The walk on pathways that lead to misery and suffering. Even today, potable water is not available to all. One could give many more examples.

The real test of progress is the quality of life. Here we come out very poorly.

We cannot, however, give in to progressive disillusionment. We cannot and should not abandon hope. Let's wait and see, what the prime minister says on August 15, 2010!