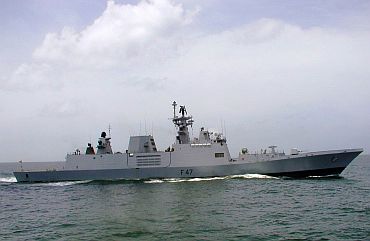 India on Thursday commissioned its first indigenously-built stealth warship with sophisticated features to hoodwink enemy radars and gained entry into a top club of developed countries having such capability.

Inducting 'INS Shivalik', the first of the three-ship Project-17 frigates, at the Mumbai-based Mazagon Docks (MDL), Defence Minister A K Antony called it a red letter day for the armed forces.

The other countries having the capability to build stealth warships are the US, the UK, Russia, France, China, Japan and Italy.

'A red letter day for the Navy' 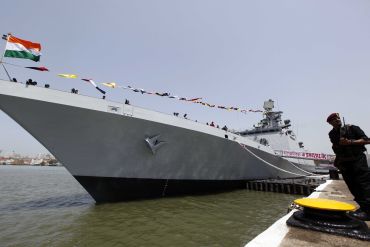 "It is a red letter day for the Navy, armed forces and ship building industry of India. We can consider ourselves as a really potent force and the Navy has to maintain eternal vigilance since we have a long coastline," Antony said unveiling the new warship.

"We have to maintain high-level of operational readiness at all times. Only a professional Navy can meet all its challenges," he said.

Shivalik class warships can deal with multiple threat environment and are fitted with weapon suite comprising both area and point defence systems. It has sensors for air, surface and subsurface surveillance, electronic support and counter equipment and decoys for 'soft kill measures'. 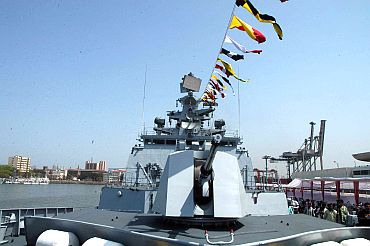 Two more of the Shivalik class -- INS Sahyadri and INS Satpura -- would be ready for commissioning by November this year and middle of next year respectively.

"INS Shivalik has the latest stealth features to outsmart the enemy with low radar cross section, be it of the hull, infra-red or sound signatures," according to Navy's Director General for Naval Design Rear Admiral K N Vaidhyanathan.

"Shivalik is a steep jump in the indigenous design effort of the Directorate of Naval Design that has since 1954 designed 17 warships of different classes with 80 units built out of them. Currently, there are four designs from which 11 warships are under construction," he said.

Though the Shivalik project took the Navy nearly 12 years from the drawing board stage to its commissioning, Vaidhyanathan said new designs for warships the world over also had taken that much time. 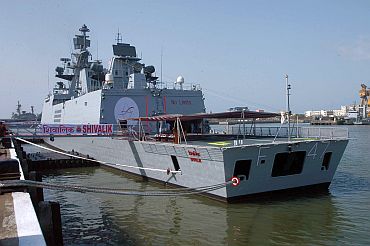 The total indigenous effort accounting for 60 per cent of the cost is estimated to be Rs 2,300 crore per ship.

With better modular habitation and galley facilities on the ship including an electric 'chappati' (Indian bread) maker, the features in the warship would ensure that the crew was  more comfortable while sailing.

Shivalik would also be the first warship of the Indian Navy to provide for separate living rooms for women crew as and when the Defence Ministry decides to send them on board battleships.