Stranded in Europe: 'It looks like a rather long wait' 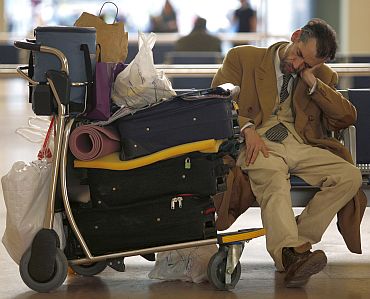 The shrinking ash plume from Iceland's Eyjafjallajokull volcano has raised the hopes of thousands of stranded passengers. However, even though the air lockdown over Europe may have eased, the chaos and confusion prevails.

Lakshmynarayanan travelled to Dusseldorf along with some other Indians to take part in the Wire and tube expo.

Most of them planned to leave by Friday last. However, their travel plans went haywire after the cloud of ash from the Icelandic volcano spread across Europe.

"The list (of Indians who had attended the expo) includes many Chairmen, MDs and very senior officers from cable/steel industries. The situation has come out to be a big blow. Most of the people do not have more clothes food is another major issue, as most of them are Vegetarians. Some people do not have cash or international credit cards ."

"I am in Belgium and did not go to the airport. It looks to be a rather long wait Of course, we cannot do anything. Land transport to India is simply out of the question."

Are you among those who are stranded in Europe? Share your experience with us at citizen.reporter@rediffmail.com You can also upload videos here