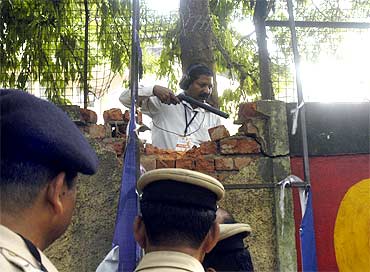 Image: The bomb squad near gate no. 12 at Chinnaswamy Stadium
Photographs: KPN photos

A major tragedy was averted at the Chinnaswamy stadium in Bangalore on Saturday when two bombs, which were timed to explode at 8 pm, went off at 3 pm.

A third bomb, which was found later, was defused by the bomb squad of the Karnataka police.

The police also found another bomb near gate number 7 of the stadium, which was timed to explode at 4.30 pm.

Sources confirmed to rediff.com that all three bombs had been timed to explode at 8 pm, when thousands of spectators were leaving the stadium after the end of the match.

Two explosions had rocked Bangalore minutes before the Indian Premier League match between the Royal Challengers Bangalore and the Mumbai Indians at 4 pm on Saturday.

The two bombs, planted at gate number 12 and near the Anil Kumble circle close to the stadium, went off at 3 pm instead. Fourteen people, including three policemen and one security personnel, were injured in the blast. The security guard's condition is reportedly serious.

Sources point out that if the bombs had exploded at 8 pm, they would have caused chaos and panic among the thousands of spectators, and might have led to a massive stampede.

Immediately after the news of the explosion broke out, the players were asked to return to the dressing room. The police then carried out a second round of anti-sabotage operation.

Another bomb found near IPL stadium in Bangalore 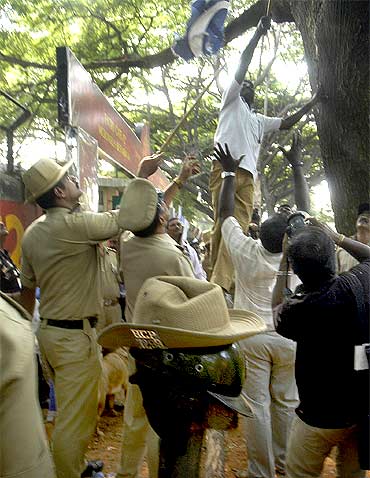 The Union home ministry has asked for a report about the twin blasts.

Investigations have revealed that improvised explosive devices and a timer device were used to trigger off the two low-intensity blasts. The investigative teams say that crude bombs were used in the blasts, and they were similar to the ones used to trigger the Bangalore serial blasts in July, 2008.

The forensics team has found that ammonium nitrate was used to assemble the crude bombs. The police are probing the possibility of the blasts being the handiwork of terror outfit Indian Mujahideen, sources told rediff.com.

The police had initially assumed that the blasts had been planned to create panic, not destruction, by some mischief mongers. The presence of the IEDs and the timer in the bombs has given the case a whole new perspective, as these are specialised equipments and are not easily accessible to the common man, said sources in the police.

Massive manhunt to nab the culprits 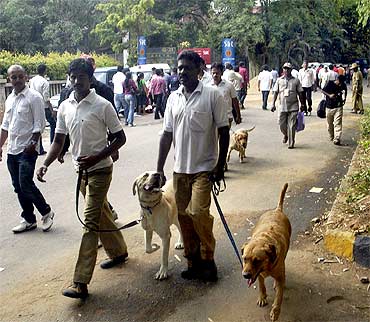 "Although it is too early to comment on who could have carried out the blasts, we are not ruling out the possibility of a larger group being involved in the incident," said a police official.

The bomb was also packed with shrapnel, said sources.

A massive manhunt has been launched to nab the perpetrators of the blasts. Several investigative agencies, including the Intelligence Bureau, are trying to ascertain the motive behind the twin blasts.

Unconfirmed reports have suggested that a couple of people have been detained for questioning in connection with the blast.

"We have also found nitrate glycerine in the bombs," he said, adding that all the bombs have been defused and there was no cause to panic.