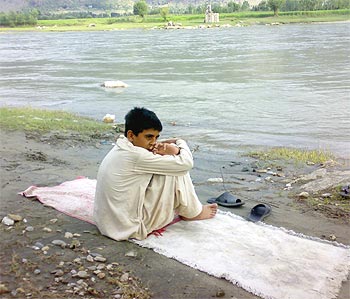 Akhtar Gul, 13, is sitting on the bank of River Swat. He is a fine swimmer who could easily cross the river that separates Dir District and Malakand Agency, but he is reluctant to plunge into the water.

Gul is scared that while taking a swim, he may once again find the dead body of a militant beneath his feet, like the one he found recently in a swirl, which has given him sleepless nights since.

Not only Akhtar, but almost all the residents of this area are afraid of going to the river, as the sight of militants' corpses floating in the river is becoming common.

These militants were not killed in combat during the recent military operation in Swat -- they were arrested and later killed, while in the custody of security forces. Though a great deal of evidence is available about the extra-judicial killings being carried out in Swat, such incidents usually go unreported due to the lack of media access in the crisis-torn region.

After the three-month long military operation ended, it was common to find bullet-riddled bodies dumped in different parts of the valley or the bodies of militants, hands bound with ropes and shot in the head, hanging from electricity poles. 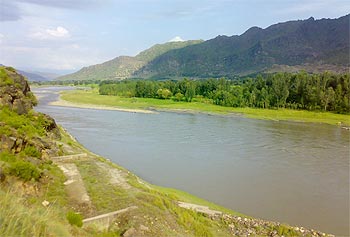 The people living on the bank of the river have become familiar with such experiences. Ahmad Jan, 37, a resident of Badwan area of lower Dir, told rediff.com, "It is very common to see the dead bodies of militants floating in the river. We have stopped our children from going to the riverside, as they are scared all the time."

The people are also frightened to dispose off the floating bodies due to the veiled threat by the government. Afzal Khan, a resident of Totakan area in Malakand agency, says, "We found the dead body of a bearded man in the river. We tried dumping it in the nearby graveyard but the security forces warned us against it, so the body was thrown into the river again."

Despite being warned by the government, some locals dump the dead bodies secretly if found on the riverside, like the one they found in Khadagzai area in Lower Dir.

"Animals had started eating the body and the odour was unbearable, so it was buried under the stones," recalled a local resident. 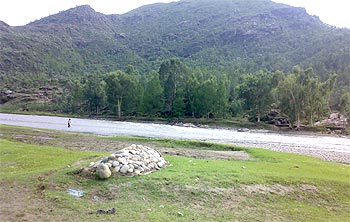 Security forces prefer to dump the dead bodies of militants who have been killed in custody in the River Swat.

Talking to rediff.com, a security personnel, on condition of anonymity, revealed, "The dead bodies of the militants, who are killed in custody, are dumped into the river from the Kanju Bridge. We feel sorry for them but we cannot say anything, as an order is an order."

Ironically, before the Pakistan government launched the military operation, Swat had witnessed wide-spread atrocities and violence by the Taliban. So the locals have seen dead bodies being dumped in the fields, at the riverside or hanging from poles and trees. According to reports, approximately 226 bodies of militants and their sympathisers have been recovered from across Swat Valley since mid-July.

The Human Rights Commission of Pakistan has discovered two mass graves at Kokarai and Shah Dherai areas of Swat. Locals fear that such graves also exist in other parts of the valley to which the media has no access to.

Asma Jahangir, the chairperson of HRCP, has severely condemned the Pakistan Army on the issue.

"We have raised the issue and asked the government to clarify whether it considers it as an internal law and order situation, on which human rights are applied, or as an armed conflict that comes under the purview of humanitarian law. The HRCP has proposed the formation of a multi-party parliamentary committee for conducting an inquiry into this issue and the reports of extrajudicial killings," she said. Talking to rediff.com from an undisclosed location, Taliban spokesperson Haji Muslim Khan alleged, "Instead of propaganda, the government should provide an opportunity to the media to show the real picture of the area. A majority of the people killed during the military operation were innocent civilians, while the majority of Taliban militants and their leaders are all safe. Where are the champions of human rights who always voiced their protests when the Taliban killed a criminal or person of bad character? Today, the army is killing innocent people and there is no one questioning their actions."

The people of Swat are living in constant fear and remain tight-lipped about the issue. Extra-judicial killings by security forces are very common. The army follows a zero-tolerance policy not only towards hardcore militants but also for their sympathisers and suspected militants.

Once a person is arrested on the suspicion of being a militant, his relatives lose all hope about his return. The killing of a local militant Azim Kasab in Butkhela, the headquarters of Malakand agency, in the custody of security agencies, had terrorised the locals. It is the second high-profile killing in the area after the death of Tehreek Nifaz-e-Shariat-e-Mohammadi deputy chief Maulana Muhammad Alam, who was taken into custody on June 4 and was reportedly killed on the third day of his arrest, while he was in custody.

'What type of justice is this' 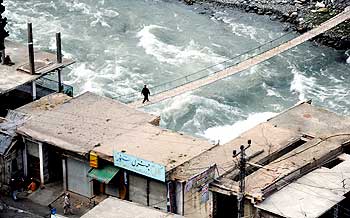 The spectre of death and horror has started haunting the children of Swat. "We were playing cricket at Zafar Park when a vehicle of the security forces stopped near us. The bullet-riddled bodies of two militants were dragged out of it. The security personnel told us that those are the bodies of the state's enemies and no one would be spared if they were found involved in such activities. Whenever I am alone, the images of those people come to my mind," said Zubaid khan, 11, a resident of Butkhela.

Imran Shah, another Butkhela local, said, "Our neighbour Hakim is a leading militant in the area. He has escaped after the military operation, but the security forces have arrested his father and three brothers, who never agreed with the Taliban mission. A letter has been sent to Hakim's family, warning that if he did not surrender to the army, his brothers and father would be killed one by one. I think Hakim would never lay down his arms. What type of justice is this, where someone else is punished for the wrongdoings of another person?"

Mustafa, a vendor at Thana town in Malakand agency, was allegedly killed while being tortured in the custody of security forces. The Taliban had ordered him to guide militants, who were strangers to the area, to their hide-out. Mustafa had done so as no one dared to defy the Taliban.

After the military operation got over, he was picked up by the security forces and after 40 days, his body was found hanging from an electricity pole in Jalala village.