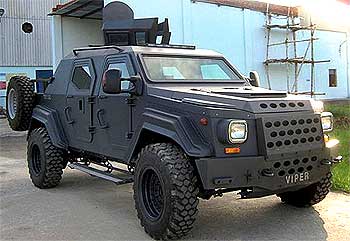 With the government of India increasing its focus on updating the defence forces with modern technology, a private Indian company has launched a range armoured vehicles for the Indian armed forces and police.

The high-end armoured vehicle, which is a first-of-its-kind in India with bullet, mine and blast proof capabilities will be showcased in New Delhi in October. The company, Shri Lakshmi Defense Solution Limited, has commenced commercial production and is in the process of delivering its first bulletproof vehicle DHRUV-ATC to the Special Task Force from its new unit at Rahsupur, near Kanpur, in Uttar Pradesh.

The company currently is in talks with Indian paramilitary forces and also some high-value customers in India, Europe and the Middle- East who want their vehicles to be armoured with Level-B7 protection with bullet, mine and bomb-proof accessories. The armour could cost anywhere between Rs 50 lakh to over Rs 1 crore, depending upon the accessories embedded in the vehicle. The high-end armoured vehicles will be supplied to government officials, head of states, army, and prominent VIPs.