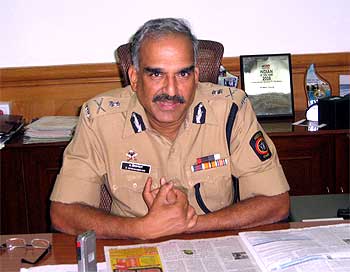 Image: Mumbai Police Commissioner D Sivanandan in his office at police headquarters
Photographs: A Ganesh Nadar Sheela Bhatt in Mumbai
He blogs, he goes online many times a day and he chats about his buddies in the force he commands.

Mumbai's Police Commissioner Dhanushkodi Sivanandan, an Indian Police Service officer of the 1976 batch, is a talker as well as a doer.

He hands out his e-mail ids -- dsiva100@gmail.com and cpmumbai09@gmail.com -- to strangers without hesitation. He leads a police force bigger than two army corps to help millions of Mumbaikars live and earn their bread without fear. He uses technology with gusto, and flaunts it, too. He loves to adapt from all corners of the world.

Sivanandan has seen it all, done it all. Among the several high-profile posts he has held, his tenure as commissioner of state intelligence and as police commissioner of Thane and Nagpur were eventful.

But he owes his popularity and profile to his stint as head of Mumbai's crime branch in 2000, when he exhibited a killer instinct of the kind the Israeli security establishment is known for. He went after organised crime in Mumbai and penetrated the mafia syndicates.

While his tenure made him popular among the people, he attracted flak from human rights activists and was slapped with cases. His team boasted of dreaded encounter specialists like Pradeep Sharma, Vijay Salaskar and Praful Bhosale, responsible for putting away in 'encounters' around 200 underworld elements.

It was during his tenure at the crime branch that well-known film financer and diamond merchant Bharat Shah was arrested. Bollywood was quick to fete him when director Ram Gopal Varma modelled his top cop in Company, played by thespian Mohanlal, after Sivanandan.

The Mumbai police commissioner opened up with rediff.com's Sheela Bhatt about what he is doing to make Mumbai terror-free after 26/11. A teaser: When asked what his top three priorities were, Sivanandan declared, "Terrorism, terrorism and terrorism."

'What it will take to convince the Pak government, only God can answer!' 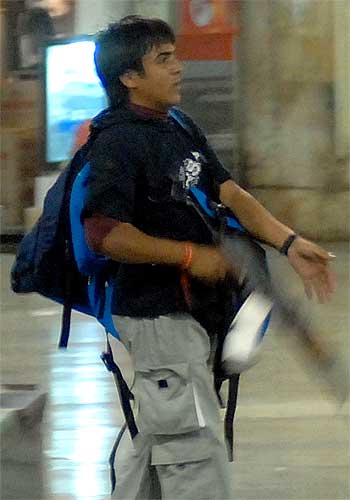 As a Mumbai police officer I will only say that it is our job to go thorough the investigations. As far as the trial is concerned, it is going on very well.

The evidences are coming up properly. What will be the outcome is anybody's guess. It is sub judice so I can't speak more.

As far as producing the evidence for Pakistan is concerned, we can't comment on their requirements and their daily change of diplomatic views and diplomatic policies they take. It is for them and our government to decide.

Whatever our government is asking us, we have been giving them all the replies to the best of our knowledge.

So what all it will take to convince the Pakistan government, only God can answer that question!

Do you have any evidence against Hafeez Saeed?

Whatever evidence we had, we have given to the ministry of home affairs. The MHA and the court are satisfied. But what if someone doesn't want to get satisfied at all? It is like (fugitive gangster) Dawood Ibrahim's presence or absence. You know the issue very well.

You take a definite stand and don't want to change, then nobody can change you. I would not comment on the stand of the Pakistani government and what it will take for us to satisfy them. But we have done our best.

Whether Kasab is Pakistani or not is a foregone conclusion. The variety of stands they have taken is well known to you.

We have nothing to say on Pakistan. An open trial is going on.

How do you see Kasab's behaviour, his daily demands and all that?

I see him as (an instance of) the glory of our great Indian democracy and the judicial system that we have developed over the years.

A foreigner accused who is responsible for killing so many Indians is here (in Mumbai). We are looking after his health and safety and all that. We are also giving him whatever is necessary to keep him going.

I will only admire our democracy. We are treating him with the appropriate level of judicial requirement. We are giving him a lawyer and looking after his security. The judicial pronouncement will be on legal lines.

Logic also demands to know, and there were questions from the Opposition as well, about any local involvement in the Mumbai attacks. Give us a convincing answer.

My convincing answer is that continuous investigation into that angle is going on by various investigating agencies and also by other agencies which are monitoring previous cases. They have not come to any conclusive evidence of local involvement.

Just to play a popular role we can say, always, that it was there.

Then, the next question will be, who is that? Why have you not questioned him? What is the evidence beyond a shade of doubt?

I can't express some suspicion and get away with it. It is easy to make statements to appease people.

Do you think the court order against the imposition of the dreaded Maharashtra Control of Organised Crimes Act against the accused in the Malegaon blasts, involving Sadhvi Pragya and other Hindu extremists, is a setback?

It is not a setback at all. When you are doing things as per the law and if somebody says this is not appropriate, you go to the higher court. It's a legal process.

'We are better trained and well-equipped than the last time' 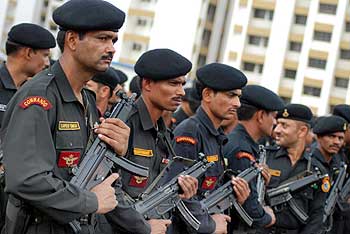 Image: National Security Guards designated for the NSG hub in Mumbai, with their weaponry
Photographs: Vinamra Acharekar
The first anniversary of 26/11 will be here soon. Is Mumbai better equipped than before to face such an attack? How?

I will say we haven't forgotten the people who sacrificed their lives. I will put up a martyr's memorial so that the policemen will be remembered.

In the future young police officers who join the force would know this is what the Mumbai police is capable of.

In the case of future attacks and related issues, I have been paying attention from day one.

As of now 39 assault mobile vans are ready. Each has an officer and eight men. Each of them has two firearms. All nine of them have modern Glock pistols. And two of the team members have AK-47, SLR etc. All of them have the latest bullet-proof jackets, bullet-proof helmets etc. We also have bullet-proof vehicles for all regions.

I have raised a force called the regional Quick Response Teams. They will be the first to respond to a terror attack. I have raised five regional control rooms. Each of it will be manned by 100 people day and night.

So I have trained a force of 1,000 personnel ready for battle. Their training is going on and they have everything latest -- from bullet-proof jackets to arms. Firing practice with 1,000 imported Glock pistols is on.

In a crisis if one pistol doesn't work the media will highlight that, so we are better prepared. What happened at VT station (Chhatrapati Shivaji Terminus, on 26/11) was unprecedented. That kind of thing came unannounced and we have learnt our lesson from it. Even then there is no guarantee that some small thing will not go wrong.

In your house when you install an alarm, only when an accident takes place will you know if it works or not. I am talking about 1,000 latest, brand-new weapons here.

If you doubt whether they will fire or not, then there is no God and we don't have to believe in the existence of anything! God or not, I believe in purchase of new weapons and we have done it.

Our boys are practicing for various situations and buildings, how to enter and move about. The firing simulators are working. There was that allegation that firing practice was not done. We assure you, practice is on.

We are better trained and well-equipped than the last time. Now, if you ask me if this is final, I would say no. There can be many, many improvements that could be done, but it is an addition.

We have ordered boats worth Rs 48 crore (Rs 480 million). As soon as the monsoon is over the boats will come. The state has spent Rs 127 crore (Rs 1.27 billion) on weapons and training for improving the security condition.

We have further raised a force called Force One which is equivalent to the National Security Guard. We have people from the state police pool in it. They will fight and support the NSG. The force chief is attached to the Anti Terrorism Squad.

They are ready. Over and above this, Home Minister P Chidambaram inaugurated an NSG hub of 258 people and they have been parked here (in Mumbai). They have been given 24 acres of land in Marol (north-west Mumbai).

The last layer is the NSG, the second layer is Force One which is getting ready.

On the ground, as the first responder, I have 39 mobile teams equipped with arms. Plus five regional Quick Response Teams.

Besides that, in the last one year, we have been educating the people. I held a seminar on terrorism attended by more than 1,000 ordinary people and opinion-makers. My officers's morale is very high.

Then, I am building a gymnasium worth Rs 80 lakh (Rs 8 million) at the police headquarters to keep officers fit. We will inaugurate it on October 2. Five police stations have also got their own gym worth Rs 5 lakh (Rs 500,000). You are welcome to have a peep into it.

We are a serious and fit force. We are also doing free medical check-up of 40,000 policemen. There is a proposal for a Rs 18 crore (Rs 180 million) school for 12,000 students in Worli (central Mumbai). Half the seats will be open for the general public and the rest for children of policemen. All these steps were begun after I took over.

Part 2 of the gripping interview: 'We are absolutely safe'