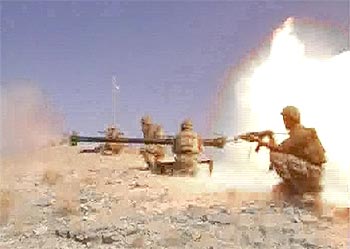 Tahir Ali's exclusive account for rediff.com from South Waziristan where the Pakistan Army and the Tehrik Taliban Pakistan are engaged in a 'decisive war'.

The Pakistan Army's Operation Rah-e-Nijat (path to salvation) against the Hakimullah Mehsud-led Tehrik Taliban Pakistan in South Waziristan is going on in full force.

According to the government, the military assault is going well and the army is close to capturing all the important militant hideouts in South Waziristan, while the Taliban claims to have destroyed a number of military vehicles including eight tanks and a helicopter.

However, a trip to both North and South Waziristan agencies last Saturday has revealed a different picture. Though forces are pounding militant strongholds with gunship helicopters and heavy artillery in areas like Makeen, Sararogha, the ground troops have only advanced towards Kotki, the hometown of TTP leader Hakimullah Mehsud.

The Taliban are strongly entrenched in their positions. They are receiving full support from their fellow Taliban, not only in the neighbourhood but also from across the border. The situation is very fluid, with both sides making claims of inflicting heavy losses on each other. Only one thing is clear -- the main victims of the operation are the poor tribesmen facing indiscriminate shelling and bombing from military helicopters and jet airplanes.

After passing through Mir Ali, Hasukhail, Kesur Sharif, Zerenai and Shakatoi areas of North Waziristan, this scribe finally reached Janata area in South Waziristan. At the moment, this is the only route that the fleeing tribesmen use to reach safer places in North Waziristan, Bannu and Lakki Marwat districts.

The trip provided an opportunity to talk to different militants coming out of the war zone and other affected tribesman, to learn about the real situation in the area. Almost all fleeing tribesmen complained about the shelling and bombing from the air and said, "The militants have not been harmed but the common tribesmen have faced human and property losses."

'Once the army enters Kotki, we will teach them a lesson' 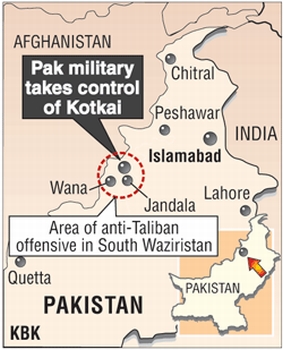 The Taliban, whether they belong to South Waziristan or North Waziristan, are fully convinced that 'it is a decisive battle' and its wining is must for their survival.

This scribe met Commander Qumandan Anwar Mehsud, at Janata in South Waziristan, who is considered to be the right hand of Hakimullah Mehsud. Talking about the ongoing war, he said, "The Taliban are very strong and are retaliating to the Pakistani forces. Hakimullah Mehsud has ordered the militants to avoid aggression while the jets and helicopters are firing from the air but wait and let the armies come in. At the moment, the militants are not attacking the approaching army from Tank and Jandola side, we want them to enter Kotki and other adjoining areas. Once they enter, they will face the music; the Taliban are trained guerrillas and will teach the Pakistan army a lesson."

"We want the locals to get outside the war zone as the military is indiscriminately targeting residential areas while the Taliban have taken positions in caves and forests. We take special care of the locals; we never forced someone to sport a beard or avoid listening to music. The Taliban have not torched school buildings in South Waziristan. We have also ordered traders not to exploit the fleeing people while buying their cattle. The war cannot be won without popular public support. If you lose the public sympathy it means you lost the war," Anwar Mehsud said.

'It is a decisive battle, winning is must for the Taliban's survival' 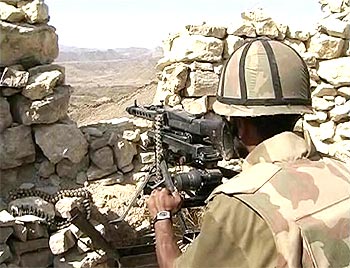 This scribe also had a chance to meet Madhu Mehsud alias 'Fani', the deputy of Qari Husain at Shakatoi. The strongly-built Madhu, who is in his late twenties, is assigned the task of making arrangements for suicide bombers while moving around the country.  He also keeps all the records and photos of suicide bombers who have carried out the attacks.

Madhu told rediff.com, "We have our suicide bombers in each and every part of the country but we are not going to use these valuable assets at once. We will use them according to the situation, as it is a decisive battle, wining is must for the survival of the whole Taliban in the region."

"All suicide bombings in Pakistan are not organised by the Taliban; there are some secret agencies that target the innocent public with suicide bombers and malign the Taliban," he said.

The Taliban have also circulated some leaflets in Waziristan and adjoining districts blaming the state agencies for attacking public places. One such leaflet, which is in the possession of rediff.com, says, "To bad mouth the TTP, Pakistani secret agencies are targeting the public places. We are fighting the holy jihad in accordance with Islamic Shariah and consider the killing of a single Muslim as unjustifiable. We are not against the common people, we are their well-wishers and guardians. The Taliban only target the army, police, secret agencies and state ministers. So a blast targeted towards innocent people has been done by the cruel secret agencies. It is obligatory on the public to support the Taliban against the American puppet Pakistani army and the government." 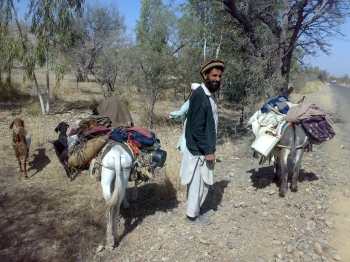 The poor tribesmen, having no sources of income, are taking their cattle with them. Some people are selling their cattle and other assets to meet the expanses of conveyance and shelters in the settled areas.

A tribesman from Sararogha, who was moving towards Mir Ali, told rediff.com, "I had some 60 goats and sheep; I sold them to a trader of Miranshah, at an average of Rs 3,500 per each animal, the price was reasonable. Now, I'm able to meet the expanses of accommodation at other areas."

This scribe also met some tribesmen at Kesur Sharif moving towards Mir Ali on foot along with their cattle. An old man said, "It took us three days to reach this area, we are heading towards Bannu via North Waziristan. The other route that passes through Tank is shorter but due to the fear of Turkistan Betani we are compelled to use this long one. We could not afford to hire a truck that charges Rs 15,000 for the cattle, so we are moving slowly on foot."

Turkistan Betani is a pro-government and anti-TTP chieftain who is based in nearby Tank and does not allow the Mehsud tribesmen to pass through his area.

'Uzbeks too are fighting for the Taliban' 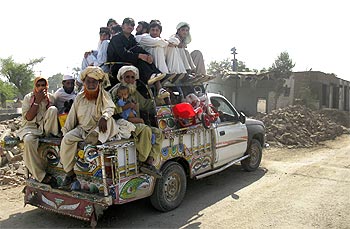 Militants from nearby areas and across the border are also coming to Hakimullah's help. At the same time, the TTP head is playing all his cards in the battle. Unlike his predecessor Baitullah Mehsud who never tried Uzbeks militants in the frontline against Pakistani security forces, Hakimullah is sending them to fight in the forefront, showing the seriousness of the battle.

According to some reports, there are some 1,500 Uzbeks with Hakimullah Mehsud, but sources inside the Taliban revealed that hardly 200 trained Uzbeks militants are taking part in the war. Usman Jan is the head of all Uzbeks militants in the area. He succeeded Tahir Yuldashev who was killed in an US drone attack this year.

Kamil, 21, a Uzbeks militant, told rediff.com, "Foreigners like us would prefer death over surrender to the Pakistani Army. Winning this battle is necessary for our survival in the region. We have left our homes in Uzbekistan; there is no way of return for us."

The tall Kamil, who has recently fought in the Swat Valley, married the daughter of another Uzbek militant earlier this month. Winning this battle is necessary for him and his new bride to remain in the area.

"At Khesora front, at the beginning of the operation, there were some 300 Taliban but after five days, 70 militants remained (a majority of them Uzbeks), the rest dispersed. On the sixth day of operation, when the Taliban destroyed some three tanks, it worked as a morale booster and the scattered Taliban gathered once again," said Kamil.

'The war may go on for a year' 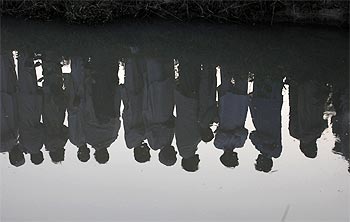 At North Waziristan, Hafiz Gul Bahadar, the head of all Taliban, has signed an agreement with the government and pledged to keep his area peaceful during the operation. But after talking to different militants in Miranshah, the headquarters of the agency and Mir Ali, rediff.com has learnt that Gul Bahadar has no control over the lower cadres of the Taliban and they are freely going to Hakimullah Mehsud's help.

The Dawar tribesmen are helping the fleeing Mehsud tribesmen and for this purpose they have established relief camps at different places like Khesora and Mir Ali town. The refugees are provided with shelter, food and conveyance if someone wants to go to nearby Bannu or Lakki Marwat districts. In Mir Ali bazaar Abu Okasha, an Iraqi national turned social worker, is running a relief camp.

Okasha, in his early fifties, came to Mir Ali from Afghanistan following US invasion in 2001. His charismatic and charming personality won the hearts and minds of the local tribesmen so much so that they became quite used to looking up to him for getting their old disputes settled.

'Mother of all operations' 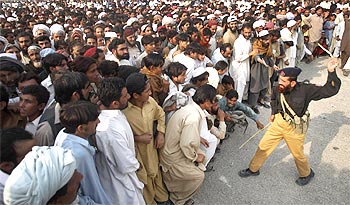 Apart from the Taliban in North Waziristan, Hakimullah Mehsud enjoys full support from Mullah Sangeen, who is leading Taliban in Paktika province across the border. The NATO forces have been pushed back from the Afghan provinces of Paktika and Khost provides an opportunity to the Taliban of both countries to help each other.

Sangeen Khan belongs to an influential tribe of Zadran that lives in bordering areas between Khost and North Waziristan. When he was Tthe aliban commander at Khost, young Hakimullah Mehsud joined him to fight against the foreign aggressors. It was Sangeen who sent Hakimullah to Helmand province where he fought on different fronts against the US-led NATO forces. The old friendship worked and Sangeen is helping Hakimullah, now.

As part of their strategy, the Taliban have slowed down the pace of war and are allowing the Pakistani forces to enter their areas. Once they enter, according to the Taliban, there would be no other way for the army, apart from surrendering or being killed. On the other hand, the government is determined to clean the Taliban from South Waziristan and is targeting the militants with heavy artillery and jet fighters.

The government has termed the operation as 'mother of all operations' while the Taliban call it a 'decisive battle'.

After some ten days, the war does not seem at any party's favour and it might take a year for it to be decided or like in the past, both sides may enter into a peace agreement.