Sign in  |  Create a Rediffmail account
Rediff.com  » News » 'We were stepping over the bodies in the restaurant' 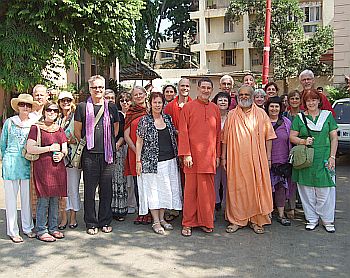 "This rain is nothing," says Master Charles, who is not perturbed by the day-long rain for two days, as he chats with a reporter for the local CNN station that is going to interview him on his memories of the November 26, 2008 Mumbai siege and his experience as a hostage.

He had taken 22 disciples with him to Mumbai; two of them -- Alan Scherr and his daughter Naomi -- died, leaving Naomi's mother and Alan's wife Kia Scherr to mend her heart in the Synchronicity Foundation headquarters near Charlottesville.

"The Indian monsoons are really heavy, and yet life goes on, especially in the monasteries," Master Charles says. "The swamis meditate and pray. If you go to any of those ashrams, you will find a lot of serenity."

Master Charles (whose dharmic name is Swami Vivekananda Saraswati) is an imposing man who looks at least a decade younger than his 64 years. He has been going to India in search of Vedantic wisdom and in pursuit of his spiritual destination for over three decades. India is more than a second home to him. And despite the terrible siege, he is planning to go there after a year or so.

When he goes into Charlottsville or anywhere else, he does not wear his ochre robe and the huge rudrakshamala. But when the media interviews him or he is conducting a spiritual business, he will wear religious clothes.

Master Charles is helping the Synchronicity community, which he founded in 1982 following the death of his guru Swami Muktananda, prepare for a yagna (ritual) to mark the anniversary of the Mumbai siege.

'I told myself that this tragedy was a gift' 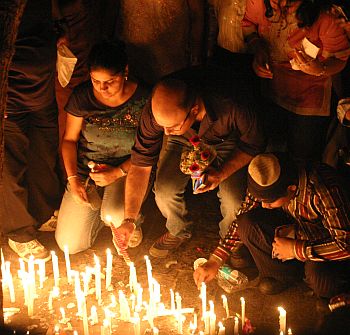 Image: People light candles to pay their respects to those who lost their lives during the attacks.
Photographs: Sanjay Sawant
During the event on November 26, Master Charles will speak on an initiative called One Life Alliance he has started to help children and adult meditate for the cause of peace.

Children will get an opportunity in several schools, to start with India and Pakistan, to make peace dragons and think of turning the negative forces into a positive reality.

In the welcome room of the Synchronicity Foundation office, he chats for nearly an hour with rediff.com

How did he go about healing the former hostages who were in Mumbai with him?

"I had to heal myself first before I could help others," he says. "I told myself as this tragedy that was unfolding in Mumbai was a gift. Now, people may ask how can something tragic and violent be a gift? My answer is that the incident placed me at a choice. The others in the group as well I had to decide what we wanted to be. We could have turned hateful, vengeful, and extremely life negative. But we chose the opposite"

The power of forgiveness plays an important role in healing, he adds.

If he and his disciples followed that path (of negativity, of hatred), he asserts, "We would have become their (the terrorists's) disciples." And that would have been a victory to the terrorists. "Because we chose the other alternative, we chose life affirmative. We chose kindness and forgave them."

Wasn't he angry with the terrorists even for a minute?

He emphatically denies he was inflamed or felt hatred towards any one of the extremists.

"I am a believer in Sanathan Dharma," he says. "In that tradition, there is no room for hatred, and a judgemental nature."

There is a karmic logic to everything that happened in Mumbai, he and fellow meditators feel.

'There were bombs, guns and explosions in and around Oberoi' 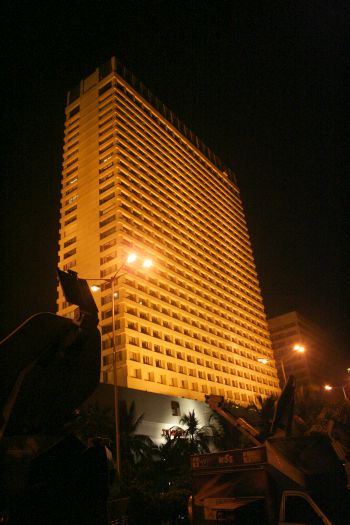 Image: The Oberoi Hotel
Photographs: Sanjay Sawant
Philip Duncan, a physician who was present during the siege along with his wife, has told reporters that pilgrims from Synchronicity provided 'a cosmic counterbalance to the extreme negativity of the killers. He also said the carnage 'might have been even worse, if the pilgrims were not there to provide that balance.'

Master Charles agrees with Philip's observation: 'So you could look at our experience as being exactly where we were meant to be.'

Master Charles -- who was in his room with his 28-year-old aide Ben Radke and Steve Ross, a friend, when the siege began -- says years of meditation taught him to transform the most negative things in life into positive force.

There were bombs, guns and explosions in and around Oberoi, he continues. "But then there is the centre of you in the midst of all this," he adds. "The healing process began to unfold in that very room."

"An instinctive part of yours wants more information (about what is happening outside the room)," he says. "You have to determine quickly what you must do to preserve life."

Thanks to the tips he received from his hosts in Mumbai, he switched on the television, kept it going at a very low volume and came to the know the magnitude of the siege.

As he and the two men in the room broke open the window, and covered the lower part of the door to prevent more smoke snaking in, the three also barricaded the room with furniture.

His composure must have helped his assistant, who has been terrified of loud sounds since the age of eight. The Washington Post wrote that Ben's fear began when the engine blew out midair of a plane heading for Chicago. The plane crash-landed in Sioux City, Utah, and a fellow passenger unlatched Ben's seatbelt.

Meditation helped Ben overcome much of the fear as he was getting away from his teens. And meditation and Master Charles's composure helped him quite a bit in facing the noise from gunfire and the smell of death wafting through the smoke some 12,000 miles from Utah. 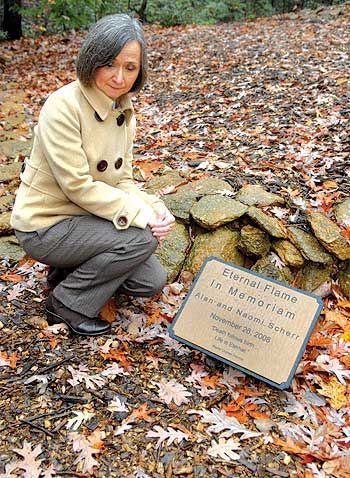 Image: Kia Scherr, who lost her husband and daughter in the 26/11 attacks.
Photographs: Paresh Gandhi
'Our understanding of life is that reality is relative,' Master Charles had told the media a year ago. He is repeating today some of his statements made then. "There will be consistently the oscillation of relative polarities, whether you call them positive or negative, love or fear, subjective or objective and it is through the oscillation of relative reality that we evolve our balances."

Since all experiences are valid, he says, he fully agrees with Kia Scherr when she says she has forgiven the terrorists soon after she heard the news of her husband and daughter's murder. She had cried: 'Both of them! Both of them!' The healing would begin in less than an hour.

Of the many things he cherishes most of Kia's understanding of the reality is the story she tells him and other ashramites about Kia's sister showing her two bright stars, and telling Kia they are Alan and Naomi.

Master Charles says he had suspected that Alan and Naomi were dead as he heard they had been missing.

When did he see their bodies?

It was the third and final day of the siege at the Oberoi. As he was accosted out of the hotel, with his clothes turned black by the soot, and his body reeking of sweat, and smoke, the police directed him to the Tiffin restaurant, where he made the grisly discovery.

It was like the beautiful hotel had been turned into a war zone, he says. "We were stepping over the bodies in the restaurant even though we were very careful."

Did he touch Alan and Naomi?

"No, I gave a silent blessing," he says, choking a bit. "It was a horrendous crime scene and we were told not to disturb anything. I had wept when I had heard they were missing and later, when I saw them dead. I saw their bodies amid many other dead people. I wept and prayed for them all, and others who might have died outside of the Oberoi hotel."

What prayer did he say for them?

"I said the same prayer that I had uttered when they were reported missing," he continues. "Om Namam Shivaya."

"When you return from that entire experience, for a person who meditates, everything may seem the same," he muses, "and yet one thing is not same. You have been transformed. You are more aware of life. You are more than you have been."

'I will look into his eyes and ask, Who are you now?' 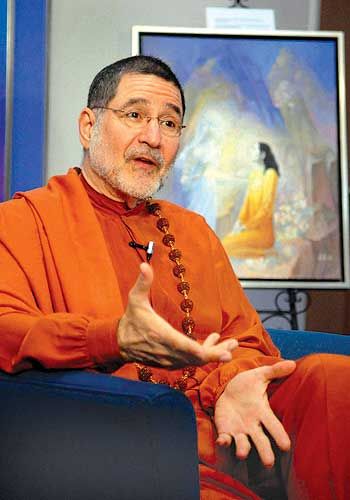 Image: Master Charles
Photographs: Paresh Gandhi
In the intensity of the experience, he continues to muse, one may ask if one can experience the oneness of life. "I believe so," he adds. "I call it an amazing journey. Without that experience would we have had an opportunity to take our consciousness to a deeper level? Isn't who I was and who I am now the result of that experience? And that is why I say I am more now."

One of the terrorists is still alive, we remind him. If you were to meet him, what would you say?

"I believe many human beings are like robots; they are conditioned by many things including their religious beliefs," he muses. "I think of how my own culture had limited me in many ways. In the case of the terrorists, they were conditioned by life's negative forces. I would tell the man (Ajmal Kasab, the surviving terrorist). 'If that's where your feet are in, and you went along with your conditioning, I forgive you.'"

Master Charles also said if he encountered the terrorist, he would sit with him quietly for a long time. "I would be absolutely still," he said, his voice sounding like a whisper. "I will sit silently with that human being. That is when the moment of truth speaks most clearly. Out of that silence, we could connect as human beings."

He may tell the terrorist that he can't fully comprehend why the terrorist created the experience (of siege, killing people) for himself. And he may still tell him that how he (Master Charles) has rejected violence and refused to have similar conflict in his own life, how he has chosen love, compassion, kindness and peace.

He pauses for a few moments.

"Then I will look into his eyes and ask him, Who are you now?"