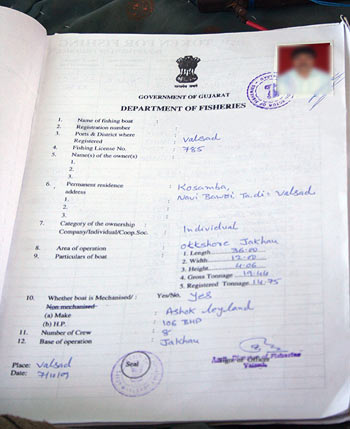 Tandel Narsi Thakker's fishing boat, the Tej Vishwa, arrives at Jakhau port at around 10.20 am after a five-day journey into the sea. Nothing unusual except they were supposed to come back only after seven days according to the Boat Movement Book issued by the Commission of Fisheries, Gujarat government, and a log maintained by the fisheries department office at Jakhau.

The Log Book maintained by the fisheries department (officials declined permission to photograph the book) lists the name of the boat, name of the tandel, the amount of water and diesel carried onboard, the approximate date and time of arrival and the date and time when a boat leaves the port.

Interestingly, the Log Book makes a note of the number of khalasis (workers)on board but not their names, photographs and addresses making it vulnerable to misuse if somebody wants to.

Coming back to the Tej Vishwa, one of the khalasis on board had suddenly taken ill on day three of the fishing expedition. Khalasi Ramesh Ladi*, who hails from Verawal and works on Thakker's ship, that is registered in Valsad, was suffering from dysentery and hence they had to return immediately.

Thakker, as the helmsman of the boat, reports this to the fisheries officials and also informs them he will leave again the same night for another seven days.

Ladi will now be replaced by another khalasi when the Tej Vishwa leaves that night. Even Thakker has no idea who the replacement will be as the person who owns the ship -- Thakker refused to name the owner for this report -- will make arrangements for it.

Didn't something similar happen to one of the khalasis on board the ill-fated M V Kuber and couldn't such glaring lapses -- no mention of the khalasi s in the Log Book maintained by the fisheries department -- lead to another 26/11 like situation?

Corrupt officials look the other way 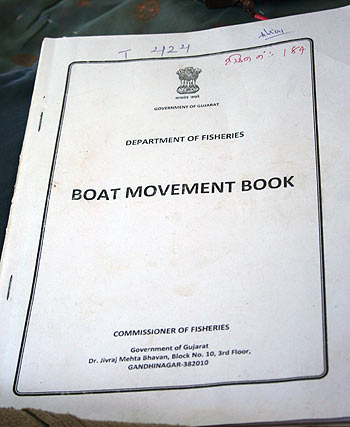 "This is very common," says Vajubhai Vala*, a senior officer manning the desk at the rickety, tin shed belonging to Jakhau Fisheries, a few feet away from where the boats dock after they enter the port.

"Sometimes," he says, "they come back earlier than their arrival date and sometimes arrive a few days late."

Jakhau, a small port in Gujarat with abysmally inadequate infrastructure to monitor some 40 to 50 odd ships that enter and move out of the port, has more than ninety per cent of the ships that have Valsad and Okha registrations.

Vala does not remember the exact number of fishing boats that operate out of Jakhau port every fishing season.

After the 26/11 terrorist attacks in Mumbai, the fisheries department were given the primary responsibility of verifying various documents like the creek pass, the tandel's registration documents, random identifications of khalasis who also have a fishing pass issued by Jakhau Fisheries.

"This was supposedly an effort to take some load off the Customs," says Manish Panchmukia*, another fisheries official who was recently posted at Jakhau from Okha, another major fishing port along the Gujarat coast.

However, the real reason was the pressure from the hundreds of fishermen's organisations registered in Gujarat who complained of high-handedness and rampant corruption by Customs officials.

"One could easily get a creek pass or a tandel's certificate provided you know the right people in the Customs," says Doshi, the fisheries official.

"While a khalasi's pass could be bought for a mere Rs 50 you would get a tandel's certificate duly signed by the customs for Rs 5,000," he adds, alleging rampant corruption when the Customs looked after the operations.

Customs officials at Jakhau denied the allegations as baseless, maintaining that the fisheries officials are more corrupt.

Ladi, however, is much more forthcoming.

"The Customs and local fisheries officials are corrupt to the core. While the Customs charge us Rs 50 for a khalasi's pass, the fisheries people ask us for money as well as fish all the time for letting us move unhindered during the night or day time."

He also reveals that the Tej Vishwa will be allowed to venture out to sea the same night, breaking rules. A fishing boat is not allowed to leave on the same day it arrives at port, Ladi notes. He says the fisheries officials make a false entry that the boat left the next day and if the Coast Guard or police patrol boats catch the boat they too are bribed by the tandel.

"Whenever a boat sails away we have to list all that we carry along with us including the amount of diesel we carry. While most ships have fixed diesel quotas when they leave the port, the owners of the boats make provisions for such emergencies from the black market and the fisheries officials turn a blind eye to all that," Ladi adds.

"While the Coast Guard, the Indian Navy, the Gujarat Marine Police and the Border Security Force maintain a constant vigil along their jurisdictions, loopholes like these can be easily exploited by anybody who wants to sneak into our territorial waters," says a Coast Guard official who did not wish to be identified for this report.

A large number of fishermen move from Valsad, Verawal, Okha and Porbandar to Jakhau when the fishing season starts at the end of August every year and stay put till the monsoon begins the next year. They build makeshift tents along the coast without any checks by the Jakhau police.

Illegal activities go on under the officials' noses No one knows who these people are, what their antecedents are or what their intentions are," says the Coast Guard official. The Coast Guard station at Jakhau is located close to these temporary settlements.

While the colony of 300-odd settlers from various towns in Gujarat are subjected to random checks by the Jakhau police, which is located an intriguing eight kilometres away from Jakhau port, it is more in the nature of harassment than a measure to keep a check on any suspicious activity.

"They (the Jakhau police) come here, check our identification papers and boats randomly. Most of the time they are drunk. If they don't find anything they beat us up and ask us for money or liquor," says Ranchod Bhai, a fisherman who has moved to Jakhau from Valsad for the August-May fishing season with two small boats and five members of his family.

He finds khalasis for his boats without checking on antecedents only when he comes to Jakhau, he admits. "If they have a pass issued by the fisheries department it is enough for me as well as the officials here," he adds.

"Most of our fishing vessels are pawned to contractors here (in Jakhau) and we have to sell our catch to them to repay the loans," says Ranchod Bhai.

"If we fail to get fish worth less than Rs 70,000 every fishing season they force us to move to areas adjoining the maritime border to get bigger catch," adds Ranchod Bhai who owes Rs 400,000 (which he borrowed to build two boats of his own) to a contractor in Jakhau.

"The poor fishermen have no option but to obey what the contractor asks them to do," says Vala.

Ranchod Bhai alleges that some fishermen smuggle drugs to make money and repay their debts.

"It is the worst kept secret here," says Vala about how openly smuggling activities are indulged in right under the nose of the Coast Guard, the Gujarat Marine Police and the local police station in Jakhau.

"All these security lapses, exploitation of the poor fishermen at the hands of contractors, local police, customs and fisheries officials could be easily be exploited for another 26/11-like attack should one plan it," says the Coast Guard official.

"Nothing is going to change much here," sighs Ladi."26/11 was not enough for the corrupt officials to open their eyes and do their duty sincerely."