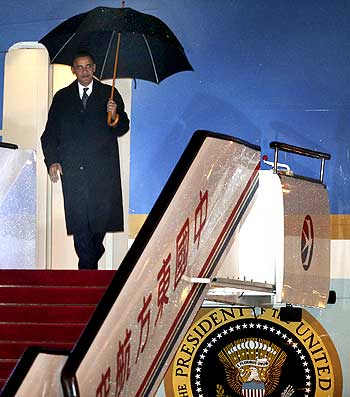 Image: US President Barack Obama steps out of Air Force One at Pudong International Airport in Shanghai
Photographs: Nir Elias/Reuters

Maintaining that the United States and China are not 'predestined adversaries', President Barack Obama on Monday said his country does not seek to impose any system of government on any other nation, but subtly pushed for greater freedom of expression in the Communist country.

The US does not seek to contain China's rise and he welcomes it as a 'strong, prosperous and successful member of the community of nations," Obama said at an interaction with students at the Shanghai Science and Technology Museum. 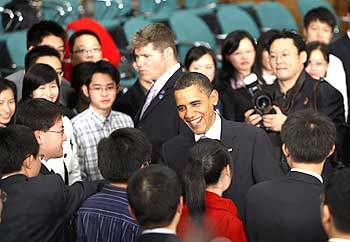 His comments came ahead of his meeting with Chinese President Hu Jintao, during which, Obama said, he will focus on global economic recovery, nuclear disarmament, climate change and promotion of peace and security in Asia.

While making it clear that the US does "not seek to impose any system of government on any other nation," Obama said, "but we also don't believe that the principles that we stand for are unique to our nation".

'Freedom of expression is an universal right' 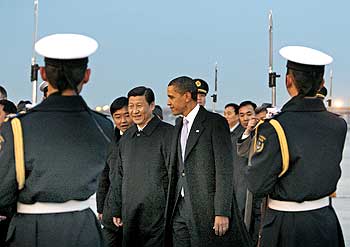 "Freedom of expression, and worship, of access to information and political participation -- we believe they are universal rights. They should be available to all people, including ethnic and religious minorities, whether they are in the United States, China or any nation," he said

Obama, who later arrived in Beijing for his maiden state visit to China, told the US-style Town Hall meeting that the world is fundamentally interconnected and power in the 21st century is no longer a zero-sum game. 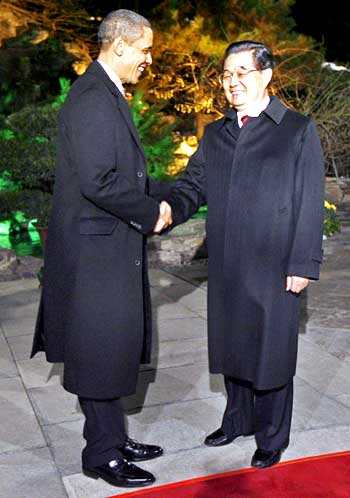 "The jobs we do, the prosperity we build, the environment we protect and the security we seek are all shared," he told the audience. "One country's success does not come at the expense of another."

Calling the US-China ties 'positive, constructive and comprehensive', Obama said the bilateral relationship opens the door to partnership on key global issues. Very few global challenges can be solved unless US and China agreed on the issue, he said.

US and China not 'predestined adversaries' 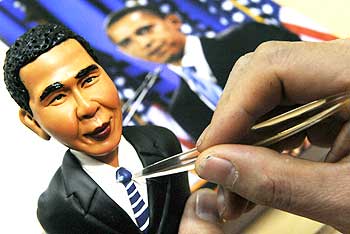 Image: An artist crafts a figurine made from flour and water of US President Barack Obama in Shenyang, Liaoning province, China
Photographs: China Daily/Reuters

The world's most developed nation and the fastest-growing country differ over binding targets for reductions in greenhouse gas emissions. China and the US are also divided over how to deal with Iran's nuclear ambitions.

Obama said the US and China are not "predestined adversaries, as the two countries share much in common, while they are different in certain ways".

Quoting the ancient Chinese saying that "Consider the past and you shall know the future," Obama said the US and China have known setbacks and challenges over the last 30 years, and he was looking forward to deepening the partnership between the two nations.