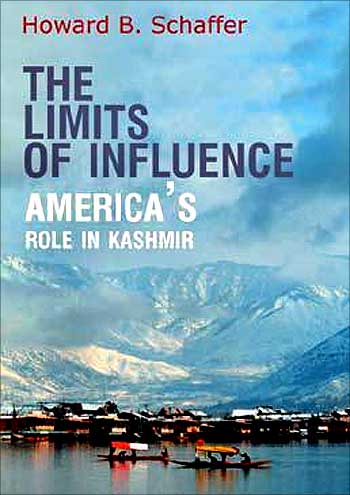 No book on South Asia published in recent years has received the kudos veteran diplomat Howard B Schaffer's The Limits of Influence: America's Role in Kashmir, published by Brookings Institution Press, elicited.

Schaffer, currently deputy director and director of studies of the Institute for the Study of Diplomacy at Georgetown University's Edmund A Walsh School of Foreign Service, is a 36-year veteran of the US Foreign Service and has served as ambassador to Bangladesh (1984 to 1987), and as political counselor in India (1977 to 1979) and Pakistan (1974 to 1977).

In an interview with rediff.com's Aziz Haniffa, he explains why the Barack Obama administration should intervene in resolving the contentious Kashmir issue.

What's new about another book on Kashmir?

What's new is that it's the first comprehensive study of America's role in Kashmir, which has ever been written. Kashmir has, of course, figured in books about US relations with India and Pakistan, and quite significantly in conflict resolution literature. But nobody -- and this has really surprised me --no one has ever tried to write an interpretation of America's role in Kashmir from the beginning -- that is, from 1947 when it first came on to the international stage to today.

I've long been very much fascinated by the Kashmir issue. This dates back to my time as a fairly junior officer at the American embassy in New Delhi, when I was sent up to Kashmir by the ambassador to find out what was happening at a time of considerable crisis. After that, Kashmir became part of my beat and I followed it closely, both when I was in India and when I came back to the State Department and worked on South Asia policy issues here in Washington.

I spent three to four years on this book, though I wasn't working full time on it. I did a great deal of research involving both archival research -- looking up the written record -- as well as talking to quite a number of surviving American diplomats and others who played a role in developing and implementing US policy on Kashmir. 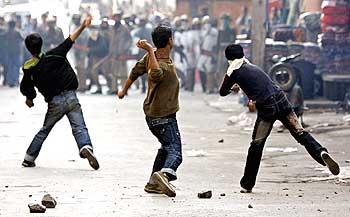 The title of the book is about the limits

It is my own idea, and the limits of influence really spells out what America's role has been --  our influence in the 1940s, 1950s and 1960s when we  really sought to project it towards a development of a settlement in Kashmir. But it was limited and unsuccessful.

Later, US efforts were focused not on developing a framework for settlement on Kashmir -- as they had been under Truman, Eisenhower and Kennedy -- but rather towards what you could call crisis-management. That is, we tried to calm down the situation when developments connected with Kashmir led the two parties into a critical confrontation.

Besides historical perspective, what message does your book provide at a time when South Asia and, by extension, the Kashmir problem, is on the Obama administration's radar?

For one thing, it will give a much better understanding of America's position and how it evolved. I think, what will be interesting to readers of Indian background will be my finding that although the Indian side has looked with considerable antagonism to the prospect of American intervention, developments over the last 10 years or so suggest that any American intervention could be more useful for the attainment of Indian objectives than would be the case for Pakistan.

You argue for a US role in settling the dispute, but you also know that India traditionally has brooked no external interference in the issue. How do you reconcile this?

Let me clarify exactly what I mean. I believe that the Obama administration ought to look for opportunities to play a helpful role on Kashmir, though these opportunities are not now present. There had been three reasons, now there are only two.

One of the reasons is that we have a weak government in Pakistan, which is certainly not in a position to make the kind of concessions which will be necessary before a settlement can be reached. The other problem is the post-Mumbai terror attack bad state of India-Pakistan relations. It would be highly unrealistic to expect that they will quickly resume progress in which United States might play a role towards a Kashmir settlement. The other barrier -- when I wrote the book -- was that there was a weak government in India. That, of course, is no longer the case.

But what's important is that the Obama administration has to be on the look-out for opportunities, and whatever role it does play will have to be very low-key. The idea of coming in with a special envoy and giving this a great deal of publicity would be a sure way of dooming whatever US effort was made. I think, in any event, that India and Pakistan have moved closer together in their positions. But, I also think -- and this is very important -- that the basic outline of a settlement on Kashmir now seems in view.

'There should be a considerable degree of autonomy' 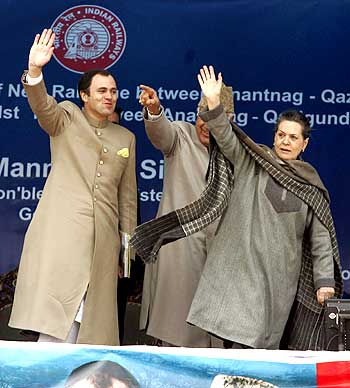 What are the elements of such a settlement?

There are several elements to this. One is that the ceasefire line, the Line of Control or something geographically close to it should become the international boundary, with minor adjustments perhaps, acceptable to the two sides. Secondly, that there be a considerable degree of autonomy for both sides of Kashmir. And third, that there be free movement or easy movement of goods and people from one side of the divided state to the other. And finally, I would like to see the development of some All Kashmir institutions, which can deal with non-controversial issues, such as say, tourism or electric power generation.

Ironically, despite the enormous goodwill Obama enjoys in India, his campaign statement -- that solving the Kashmir issue is vital to winning the war on terror -- has created a situation where any move the administration makes will be greeted with suspicion. How do you get over that hump?

You get over it by not alluding publicly to that kind of approach. As I said, what I favour when the time is ripe -- it is not ripe right now -- is a quiet approach. There is no reason to go up to the housetops and shout that this has to do with our problem of radical Islam, though that obviously plays some role in our interest in bringing the issue to resolution.

But if you look at what Obama said, particularly in his interview with Joe Klein of Time magazine, he was talking in terms of sending out a special envoy.

Sure, he makes some good arguments as to why India should want to be rid of this problem to focus on development, and why Pakistan should want to be rid of it in order to focus on the problems on the Afghanistan side. But I would not agree that because Obama said that in the course of a campaign, that is necessarily the way we ought to proceed. People say one thing when they are campaigning, but they act in another way when they are in office.

'It takes two to tango' 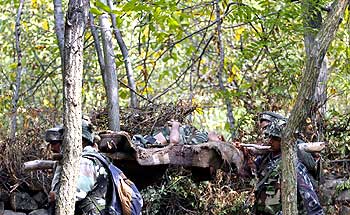 Prime Minister Manmohan Singh appears to have considerable goodwill among the Indian people, if the results of the recent election are any yardstick. Now that he is heading a stable government, do you think he has the leeway to go ahead with some pro-active proposals on Kashmir, particularly if Pakistan comes clean on the Mumbai terror attacks?

I would hope so. But you know, it takes two to tango and there is no government presently or even foreseeably in Islamabad which can begin to make the kind of concession that President Musharraf was able to make when he was at the pinnacle of his power.

The point I tried to make in the book is that it is only if there are strong governments in both countries that the two sides can make progress, can finally come close to a settlement. And it is at that point, I think, that the United States might -- and I stress might -- be of some help in getting the two sides across that elusive finish line on Kashmir they've never been able to cross on their own.

As I see it, there would be greater concessions to be made by Pakistan than by India, which after all will keep the Kashmir valley which has always been the crux of the issue. Nonetheless, there will be some concessions that India would have to make -- on the autonomy issue for example. We should look for these opportunities. In any case, with the government in Pakistan as weak as it is, all of this is moot, and will change only when a strong government emerges there to match the one in New Delhi.

'Independence for Kashmir is unworkable' 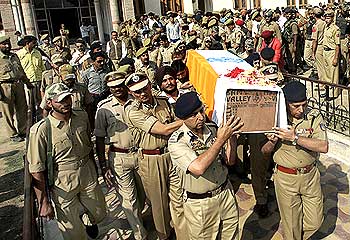 Do you believe that the time has come to institutionalise the Line of Control as the international boundary between the two countries?

I believe that is the only option. And I say that because I cannot imagine any Indian government agreeing to what is called in India a second partition, and giving up territory, except perhaps for minor changes -- swaps of territory, real estate -- to make sense strategically and economically. But any solution I see coming up would have to include the Line of Control becoming an international boundary.

Do you see independence for Kashmir as an idea?

I consider independence for Kashmir as unworkable, unthinkable, an idea that will never be accepted by any Indian government no matter how strong. I have said in the book, and I believe there are many Indian commentators who agree with me, that if they had a choice, the Muslims of the Kashmir valley would vote in favour of independence. But they are not going to have that choice.

'US can make suggestions, not take over negotiations' 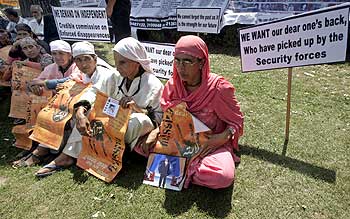 In the final chapter of your book, you call on the US to back India's bid for a permanent seat in the UN Security Council, as a carrot that will help facilitate a resolution of Kashmir. Could you elaborate on how that works?

I outlined to you the main lines of an eventual settlement: the Line of Control as an international boundary, greater autonomy for both sides, free movement of people and goods and all Kashmir institutions. What you need to do is to fill in the details, to flesh out the settlement, which will also have to include a considerable degree of demilitarisation on both sides of Kashmir.

But that, of course, is not what I see as the basis for a settlement. There would have to be a much greater degree of autonomy -- and this would apply both to Indian and the Pakistani side -- than is afforded to Indian states. And to make the settlement acceptable, you would have to develop iron-clad guarantees that this autonomy will not erode over time. You have to do that because the experience in Kashmir suggests that Indian governments can slowly erode that autonomy. So, such guarantees have to be worked out.

It's here that I could see an American role, some suggestions - though I must emphasise that the US can only make suggestions, not try to take over the negotiations. The negotiations have to be bilateral, and the US has to play a very quiet, limited role. The one thing that that will doom any settlement proposal on Kashmir to failure is to stick a 'made in USA' label on it.