Violence spreads in Punjab and Haryana 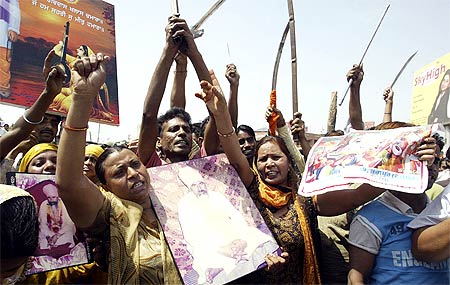 Image: Supporters of Guru Sant Rama Nand, the Sikh preacher who was killed in Vienna, shout slogans during a protest in Amritsar
Photographs: Munish Sharma/Reuters

Two persons were killed and several injured as violence triggered by the killing of a Dera leader engulfed Punjab and parts of Haryana, where protestors set afire train coaches, buses and clashed with the police, prompting authorities to impose curfew in four cities and calling out the Army in Jalandhar.

The guru, 57-year-old Sant Ramanand, was injured after Sikh followers clashed with knives and a pistol at a gurdwara in Vienna's 15th district on Sunday. He later succumbed to his injuries.

Curfew was imposed in Jalandhar, Ludhiana, Phagwara and Hoshiarpur following large-scale violence and damage to government and private property, including cars parked in police stations.

Shops and commercial establishments were closed following a Punjab bandh call given by local units of the Dera Sachkhand Ballan whose leaders were attacked in Vienna.

Curfew imposed in many parts of Punjab 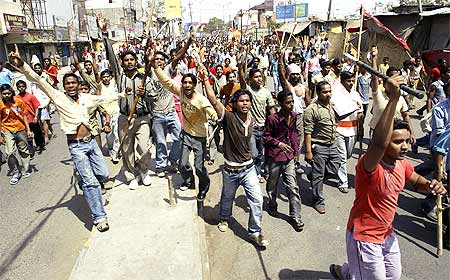 Image: Supporters of Guru Sant Rama Nand, the Sikh preacher who was killed in Vienna, shout slogans during a protest in Amritsar
Photographs: Munish Sharma/Reuters

The Shiromani Akali Dal also gave a bandh call. Road and railway traffic was disrupted at several places in the state even as protestors damaged trains, buses and other vehicles at various places including Jalandhar, Phagwara, Hoshiarpur, Nawanshahar, Banga, Ludhiana and Moga. The Delhi-Lahore bus service was stopped at Ludhiana as a precautionary measure.

Protestors also blocked the Ambala-Delhi National Highway for three hours and damaged buses in Ambala. Condemning the killing of the Dera leader, Punjab Chief Minister Parkash Singh Badal appealed for calm and asked people not to be provoked.

In Jalandhar, four bogies of the Jammu Kanyakumari Himsagar Express were set on fire after the passengers were asked to alight by the arsonists.

The protestors set afire the engine of the Sonepur Jammu Express in Phagwara after forcing the driver Anant Singh to come out by placing a sword on his temple. The engine was detached from the train in time to prevent the fire from spreading to the coaches.

The Army was called out in the curfew-bound town of Phagwara after protesters went on a rampage, damaging the engine of a train and shops, despite the presence of the BSF. Even as the curfew was clamped in the town, protesters damaged the engine of a train bound for Jammu, damaged closed shops, athe killing of chief of Dera Sachkhand Sant Rama Nand in a shooting incident in Vienna.

In retaliation to the damage caused to their shops by Dera followers, members of other communities clashed with them at Jhatkianwala Chowk on the Phagwara Banga road, Sugar Mill flyover Chowk and near Gurdwara Nimewala on the Hoshiarpur road.

After the reports of clashes between the two sides started pouring in, the administration called in the Army. 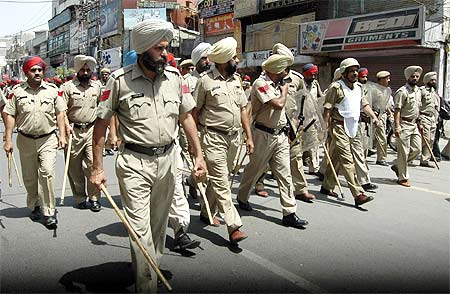 Traffic on various roads, including the Delhi-Ambala, Jalandhar-Jammu and Jalandhar-Chandigarh National Highways, besides various state highways, has been badly affected.Nearly 20 buses and other vehicles, including motorcycles, were damaged at various places including Patiala, Ludhiana, Jalandhar, Amritsar, Hoshiarpur, and Phagwara in Punjab and Ambala in Haryana.

On the Jalandhar-Delhi national highway, protestors armed with lathis and swords damaged the engine of a train bound for Jammu.

Northern Railways also cancelled several trains in Punjab in view of the widespread violence in the statea. The cancelled trains include EMUs mostly connecting Jalandhar city to other parts of the state, a Northern Railway spokesperson said.

The violence also saw complete disruption of rail traffic on the busy Jalandhar-Amritsar track as protesters squatted on the tracks. The spokesperson said the blockade had a cascading effect with several long distance trains stranded at various stations. Image: A passenger train was torched by protestors in Jalandhar
Photographs: Stringer/Reuters

At Amritsar station, he said, trains like Paschim Express, Amritsar-Dadar Express and Pathankot-Delhi Express have been held up since morning. Similarly, the Himsagar and Sonepur-Jammu Tawi expresses were held up at Phagwara while Delhi-Jammu Special was held up at Jalandhar Cantonment.

Prime Minister Manmohan Singh has expressed deep concern over the violence in Punjab. In a message, Dr Singh said, "I am deeply distressed by the outbreak of violence in Punjab following certain incidents in Vienna, Austria. Whatever the provocation, it is important to maintain peace and harmony among different sections of the people. . All the revered gurus of Sikhism preached the values of equality, brotherhood and harmony. Invoking the teachings of the gurus, I appeal to all sections of the people in Punjab to maintain peace".

Viewing the violence in a Vienna gurdwara as a 'disturbing' development, External Affairs Minister S M Krishna said the government will ensure that perpetrators of the 'completely mindless and wanton act' are brought to justice. As he assumed charge of the ministry, Krishna said the government is in touch with Austrian authorities and is closely monitoring the situation.