It's confirmed: Prabhakaran is dead 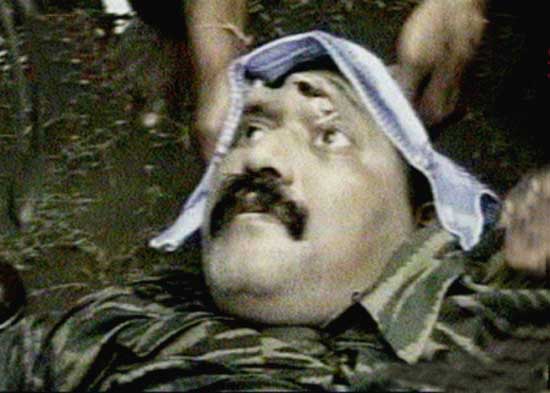 Image: Photograph of the slain LTTE chief, released by the Sri Lankan army

The Sri Lankan army on Tuesday recovered the body of slain Tamil Tiger supremo Velupillai Prabhakaran and splashed its images on the national television after Liberation Tigers of Tamil Eelam claimed that he was alive and that the group would continue to fight for a separate homeland.

"Prabhakaran's body was found near Nandikadal lagoon (in the No Fire Zone)," Army Chief General Sarath Fonseka said in a televised address, just an hour after LTTE raised questions over his death, with its new international spokesman S Pathmanathan saying Prabhakaran was alive and safe. 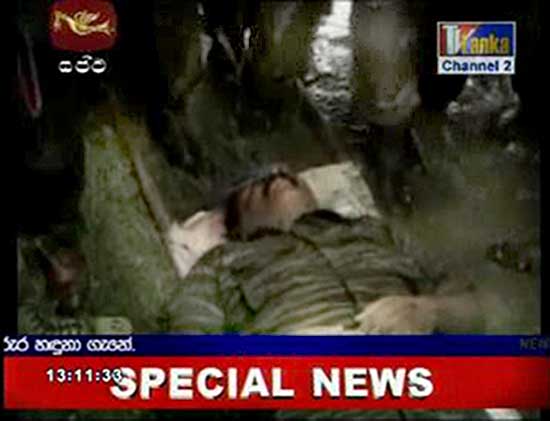 The images of the body aired by the television showed Prabhakaran in full battle gear with a bullet hole on his forehead above the left eye and his head resting on a newspaper.

Prabhakaran's face was intact with eyes wide open and the image bore a close resemblance to the stocky mustached rebel leader. The TV also showed his dog tag and a LTTE identity card bearing his number 0-01. 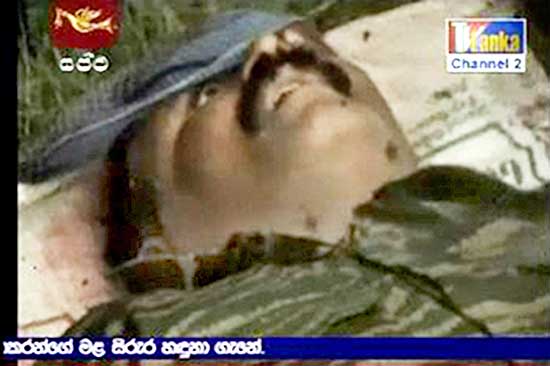 Image: Sri Lankan TV stations aired video of what appeared to be LTTE chief's corpse, with the top of its head blown off
Photographs: Sri Lankan TV via Reuters TV

The images were shown on television as Pathmanathan came out with a statement. "Our beloved leader Velupillai Prabhakaran is alive and safe. He will continue to lead the quest for dignity and freedom for the Tamil people."

The statement was carried by the pro-LTTE website TamilNet.com. 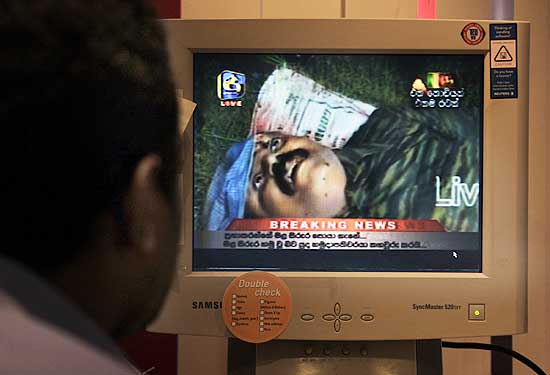 The new face of the LTTE, who according to sources, is based in some South-East Asian country, went on to accuse the Sri Lankan forces of 'crimes against humanity', saying the outfit's civil leaders B Nadesan and S Pulideevan were killed in 'cold blood' when they had come to the army's 58th division with white flags to negotiate an end to conflict.

The LTTE claims created ripples within the Lankan government and the army chief went on television to state categorically "reports from the battlefield confirmed today morning that they have identified the body of Prabhakaran, this ruthless terrorist leader".

'We cannot just throw the body' 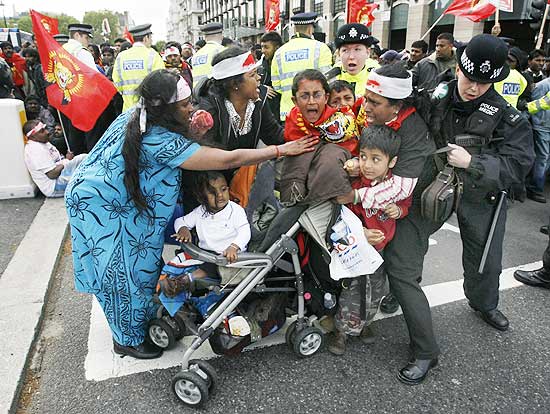 Image: Pro-Tamil demonstrators scuffle with police after blocking a road in front of the Houses of Parliament in London
Photographs: Luke MacGregor/Reuters

"The fighting was on Monday. He was killed on Monday and the body was identified today," he said.

Defence Spokesman Keheliya Rambukwella said, 'We will give the body to an undertaker. We cannot just throw the body in the jungle. We are a civilised country."

Protesting for the Tamil cause 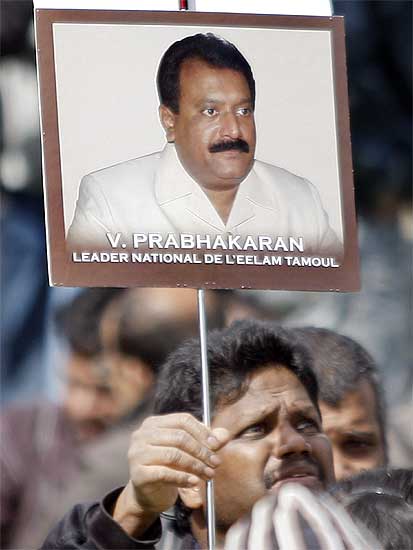 Image: A protester waves a poster of Prabhakaran during the demonstration in support of the Tigers in Paris
Photographs: Charles Platiau/Reuters

Conflicting accounts of the Tiger leader's fate came a day after Sri Lankan forces wiped out the entire top LTTE leadership to end one of the world's most bitterly fought ethnic wars.

The police said nearly 2,000 people had gathered for a sit-in protest over the plight of Tamils trapped in Sri Lanka's war-zone, on a road opposite the Houses of Parliament.

Traffic in the area was diverted and a large police posse was posted around the protesters, with police helicopters circling above Parliament Square.