Sign in  |  Create a Rediffmail account
Rediff.com  » News » India must come out of the cocoon: Dalai Lama

India must come out of the cocoon: Dalai Lama 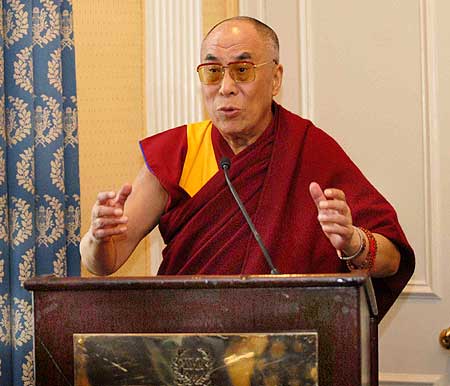 In his tours around the world, the Dalai Lama -- the Tibetan leader in exile and Nobel Peace Prize winner -- often generates awe from people seeking spiritual enlightenment and even among those who may have a political agenda against the Chinese occupation of Tibet.

But on Tuesday afternoon a very different Dalai Lama spoke to about 200 Indian Americans who were packed in a small room at The Waldorf Astoria hotel. The Tibetan leader recently completed 50 years in exile in India and so took time off from his busy schedule in New York City to thank his host country by connecting with Indians living in the US.

"The last 50 years have been the darkest period in the Tibetan history," the Dalai Lama said in what appeared to be an extempore speech delivered in his warm and grandfatherly voice, peppered with his trademark sense of humour. "There was a serious threat to the disappearance of the Tibetan people, their culture and their heritage."

"In such a time we found India as our second home," he said. "Because of the support of the Indian government, the state governments and the public sympathy, we had the opportunity to carry on the preservation of the Tibetan Buddhist culture, including our own language."

"It is important and it is my duty to thank India for what it has done for us in the last 50 years," he added.

Emphasising his indebtedness to India, he referred to the people of the host country as his Indian brothers and sisters and his gurus. And the Tibetan people were the chelas, a remark that had the audience laughing in appreciation.

"We are very, very grateful to our gurus," he added.

'Lord Shiva is a Tibetan' 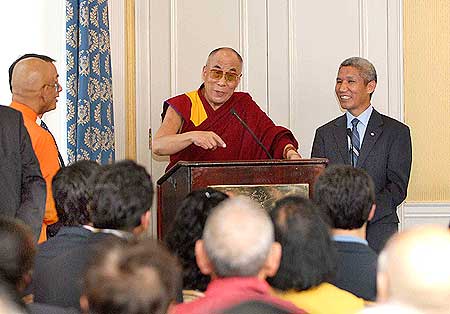 He recalled the time when Morarji Desai became India's prime minister. The Dalai Lama sent a congratulatory letter to the new Indian leader who wrote back saying: 'India and Tibet are like branches of the same Bodhi tree.'

Later reflecting his sense of humour and to the delight of the audience, he emphasised more of a connection between India and Tibet. "Lord Shiva's permanent residence is Mount Kailash," he said, laughing even before he had finished his joke. "Sometimes he moves around, but he comes back to Mount Kailash. So Lord Shiva is a Tibetan. He is a Tibetan God."

As he travels around the world, the Dalai Lama talks about two major issues -- both of which he learned from India, he said.

The first is a commitment to human values, compassion and non-violence, which he believes are the essentials to build a happy family, county and world. The second is his belief in building bridges of harmony on the basis of mutual respect and understanding.

"I take these two commitments that I learned from India," he said. "The tradition of ahimsa is central to India's being. I consider myself to be a messenger of Indian values and I try and make those values known in the world. I know I have made a small impact in the world." 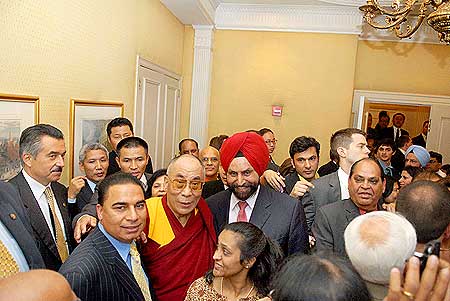 India, he said, had its own indigenous religions -- Hinduism, Buddhism, Sikhism and Jainism, as well as those that emerged outside the country like Zoroastrianism ("the Parsis who came from Iran and made their home in Bombay"), Islam, Christianity ("especially in the south in Kerala, where they have very high literacy") and Judaism ("they settled in Kochi and built synagogues").

"All these religions live peacefully in India," he said. But then he added with a touch of smile: "Sometimes there are problems, but those are the creation of politicians."

Towards the end of the talk, the Dalai Lama made a couple of political points. In further emphasising ahimsa, he pointed out that North Korea claimed that it was building nuclear weapons to maintain peace. "But ahimsa and nuclear weapons do not go together," he remarked.

Finally he took upon the role of advising India to take a more active role in world peace initiatives. And he indirectly alluded to the idea that India could be in a position to pressurise China to change its policy towards Tibet.

"Now my boss, which is India, must come out of the cocoon," he said, referring to himself as a blunt man. "The concept of dialogue is the same as the concept of ahimsa -- to not be passive, but to be active. We should be active within, but also outside in the world where conflicts occur in the name of religion."