Encounter with a 26/11 NSG commando 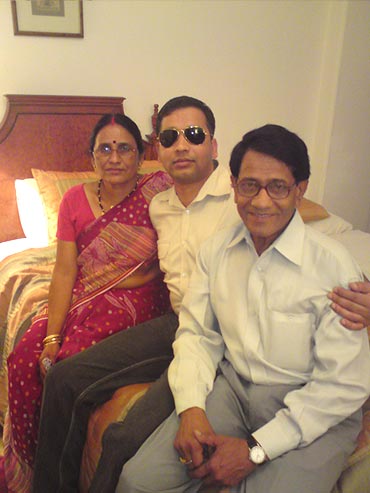 Image: Captain A K Singh with his parents
Photographs: Insiyah Vahanvaty
When Mumbai was under siege during the terror attack last November, most of us huddled inside our homes, glued to our television sets, watching in horror as the three-day standoff took a heavy toll.

However, none of us saw the gory sights inside the Taj and Oberoi hotels -- the dead guests, the bloody rooms and damaged structures. We didn't see the shots being fired, or the crumbling walls. One man, who did see those sights, has ironically lost some of his vision today.

Captain Amitendra Kumar Singh, a National Security Guard commando, was inside the Oberoi Hotel, fighting the terrorists on November 27. He was positioned in front of the room where the terrorists were holed up, and was firing at them, hoping to injure them.

It was only when he felt a sharp punch in the eye that he knew he had been hit by a grenade. The last thing he remembers is being carried down the fire exit by fellow NSG commandos and being put in an ambulance.

When he was flown out of Delhi along with his fellow officers to battle the terrorists in Mumbai, Captain Singh had never dreamt that this would be his last operation as a serving officer. Placing his life in danger to rescue innocent civilians was part of his job profile, but never had this young man imagined his career would be cut short so soon, and that his life would be turned upside down in a split second.

'My eye was damaged beyond repair' 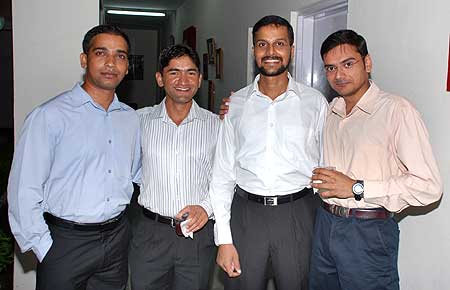 A few days after being injured, Captain Singh was discharged from the Bombay Hospital and sent to the Sankara Netralaya Eye Hospital in Chennai for treatment. However, the news was bad. The commando had lost his left eye, and doctors recommended he get a false eye. Declining their recommendation, he took a month's sick leave and went to Lucknow, his hometown, to recover.

After shuttling back and forth between Lucknow's Command Hospital, Chennai's Sankara Netralaya Eye Hospital and Delhi's R&R Hospital, Captain Singh was discharged a day before Holi and allowed to return to the NSG camp in Manesar, where he is posted.

"I was so sick of hospitals by then -- they all said the same thing, that my eye was damaged beyond repair, and that I would have to get a glass eye, which I didn't want to do."

'I'll never be able to participate in operations again' 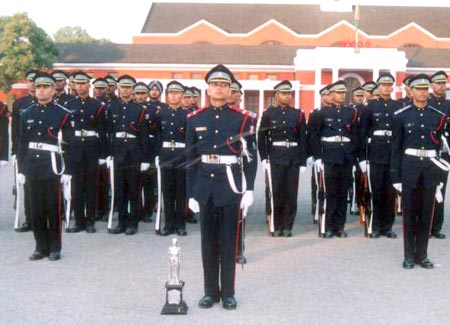 Image: A K Singh, centre, at the Indian Military Academy, Dehra Dun
Photographs: Insiyah Vahanvaty
"Though I can do everything, including driving, firing and physical tasks," he says, "I am now doing a desk job. I take care of the administration and running of the camp."

"I'll never be able to participate in operations again. Serving in the army always been my dream, which is now shattered."

"P V Manish (the other Shaurya Chakra awardee) and I were together at the Oberoi. I lost my eye and he was hit in the head by a grenade. The right side of his body was paralysed for some time, but is getting better now. In such operations, you should either die or come back safe and sound."

'I have never seen the outside world' 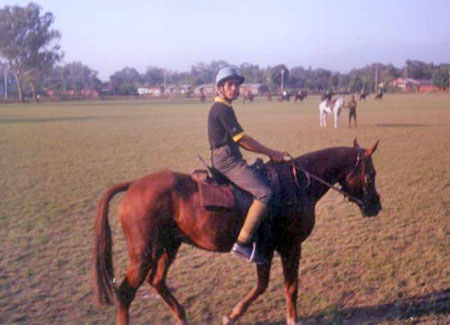 Image: A K Singh at the Indian Military Academy, Dehra Dun
Photographs: Courtesy Madhu Singh
Coming from an army background, Captain Singh feels this is all he knows to do. "I have never seen the outside world, so I don't know what I'm capable of there. If I leave this world, I think all I can do is become a teacher. But for that one needs to study -- which I can't do."

"I used to think about the IAS also sometimes, but couldn't imagine studying that much. I was never interested in studies, I hated exams and books. I was interested in sports, so I took part in extra curricular activities extensively."

"Since I hated studying, I decided to join the army. But it is not that the army is free of academics -- we have courses and tests too -- so I end up studying two days before the exam and write down everything I know! If I'd known I'd have to study so much in the army, I would never have joined." (Chuckles.)

Despite his troubles, the mention of his fiance Dr Madhu Singh brings a smile to his face. The young lady didn't allow her fiance's fate to deter her determination of joining the army as a dentist.

She is now posted in Delhi, but the couple barely get time to meet, given their demanding schedules. "We hardly get to meet because I don't go out of the NSG camp -- it's a risk for me to drive -- I can't see anything on my left side. But when I do drive, I still hit speeds of 80 kms an hour. I can't drive slowly. The other day I crashed into a vegetable cart and scattered all his vegetables on the street," he reveals with a mischievous smile.

'They are making Kasab a bigger hero than us' 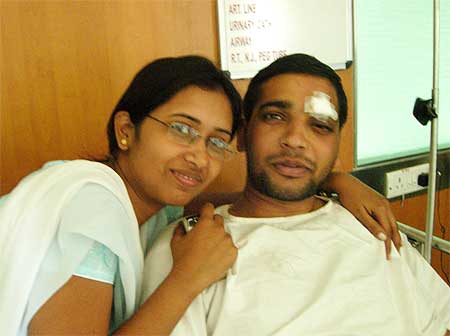 Image: A K Singh with his fiance Madhu at the Bombay Hospital immediately after getting injured
Photographs: Insiyah Vahanvaty
Hearing about captured terrorist Ajmal Kasab, the 28-year-old braveheart admits, makes his blood boil.

"He has become a bigger hero than us. They should have stoned him to death at some crossroads in Mumbai that time itself."

Discussing the operation, Captain Singh says, "The claims of policemen being inside the hotel during the attack -- there was not a single cop inside. Not even the (naval commandos) Marcos were there -- they handed over the operation to us and left."

"And today I read that so many cops were there. If they had been in the army, there would have been a court of inquiry by now. And their families have been given CNG gas stations, petrol pumps... Why aren't we given anything? We have also served the country and put our lives in danger. And it was while doing that that we got injured."

'I know good things are in store for me' 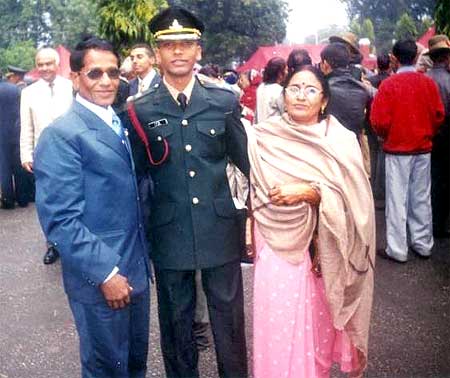 Image: A K Singh with his parents at the passing out parade at the Indian Military Academy, Dehra Dun
Photographs: Courtesy Madhu Singh
Despite the cruel hand fate has dealt him, Captain Singh says he has no regret.

"I don't regret joining the NSG even though I lost my eye. The location and complex are nice -- it makes me feel peaceful. There are forests and a temple close by. Sometimes we see leopards in the thickets. We are also provided with facilities like a swimming pool. I like it here."

"I don't feel upset about what happened anymore. I realise it was destined and that I have to live with it. But I know how hard I have worked in my life. I know good things are in store for me. God can't be so unkind as to leave me like this."