Is Husain the biggest danger to the art summit? 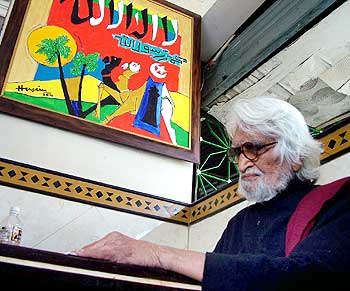 It's a question worth asking. Who should artist-in-exile M F Husain be more afraid of: the vandals who flay his art off the canvas, deeming it an insult to 'Indian culture', or savvy commercial enterprises reluctant to include his works in India's first annual international art fair of its kind, on the ground that they present a security threat to works worth crores of rupees exhibited at the event.

For the second consecutive year, as the India Art Summit readies itself for the Delhi event this month, there are doubts whether it will finally include Husain's works. Or, will the fair's organisers, Hanmer MS&L, be content to have him present 'in spirit' like last year, eschewing his works with the plea that business is business, especially in lean times.

It is a supreme irony. Maqbool Fida Husain, whose place in art history is unquestionable, who was largely instrumental in making a market for Indian contemporary art in the global art scenario, unlike many whom the market will make in that barren, no man's land of 'safe' form and content, seemingly poses the biggest danger to the art summit today.

'Where it is chaste, it is not art' 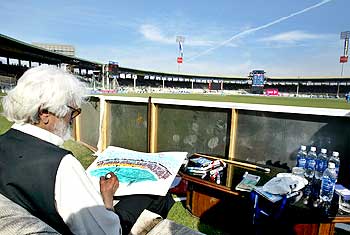 The law of the land, it seems, matters not at all. Nor do last year's landmark judgments of the Delhi high court or Supreme Court that unequivocally quashed some obscenity cases slapped on Husain's work in the past 15 years.

Demonstrating an understanding of the conceptual underpinnings of art, the judgments commented on the need to understand a contemporary art work from the painter's perspective and on artistic principles before notching up any objections, placing these acts squarely within the rubric of Constitutional guarantees of freedom of expression and principle of pluralism.

Delhi high court Justice Sanjay Kishan Kaul's May 2008 ruling put it succinctly: 'Pluralism is the soul of democracy. There should be freedom for the thought we hate. Freedom of speech has no meaning if there is no freedom after speech. The reality of democracy is to be measured by the extent of freedom and accommodation it extends.'

To this add Justice Kaul's reminder through Picasso's quote -- 'Yes, art is dangerous. Where it is chaste, it is not art' -- or observation -- 'It seems that the complainants are not the types who would go to art galleries or have an interest in contemporary art.'

Market logic of an art fair 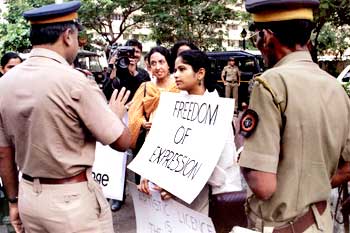 These judgments prove that acts of art vandalism do get questioned by the highest courts of the land. But who will question the market logic of an art fair that is only trying to protect its commercial interests, albeit with a forked tongue that simultaneously utters undying protestations of admiration for Husain.

In a news report last year, Sunil Gautam, managing director, Hanmer MS&L, stated, 'We as organisers have the highest regard and huge respect for the legend M F Husain. The artist himself understands the situation. He knows our problems -- this is public space and we are exhibiting works worth crores of rupees. I could not expose the show to any kind of risk. It was my duty to safeguard everyone's interest.'

Controversial for whom and for what reason? 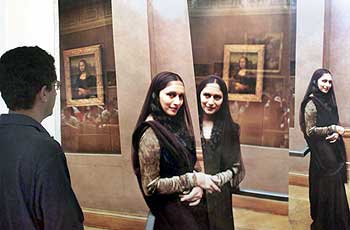 >Isn't public space a domain where the law of the land is applicable beyond doubt, where infringements of Constitutional freedoms can and are contested?

The statement underlines the extent to which the idea of public space has been devalued in recent times, making way for a monetised perception of space which operates like a gated community doing its utmost to keep out potential trouble and 'politics', as if that is possible.

Indeed, after clarifying that the fair was primarily meant to promote younger contemporary artists, Gautam was quoted in the report as saying, 'I wanted every frame to match the walls and told the galleries not to bring in works that would court controversy.'

What kind of a brief is that? Does the India Art Summit have a list of themes, styles or individual artists deemed controversial; further, controversial for whom and for what reason? Ultimately, the defensive reaction of the organisers has had the same exclusionary impact as the offensive response of Hindutva proponents to Husain's art. And that is scary. 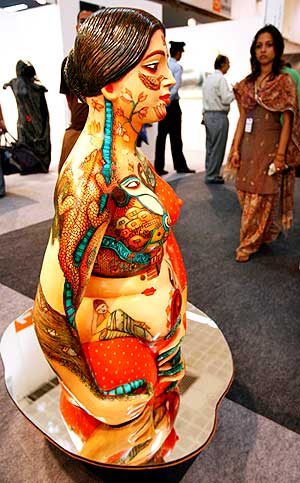 The pattern has been clear for a decade and more. The rise and rise of the art market, as well as the commandeering of the cultural commons by Hindutva forces, was simultaneously accompanied by a decline of public engagement with contemporary art.

The media, which had largely fulfilled this role of creating space for debate on art, was itself undergoing a makeover to becoming a pillar of entertainment. And public institutions were awakening to the paralysing reality of adjusting to a world that was opening up.

The vacuum of informed, public articulation on contemporary art was filled up either by an 'art appreciation' rooted in a virulent form of politics or by the confidence of an art market often more mart than art, virtually becoming the touchstone of knowledge.

Ironic, considering the compulsions of a market like the art summit -- an obligation to ensure participants and visitors a 'good experience' -- could make it ignore cutting edge works capable of causing an optic disturbance in some blinkered gaze or the other. Works that stand the test of time and become the solid bottom of art markets -- what we call fundamentals.

Greatness of art is pegged at its sales figure 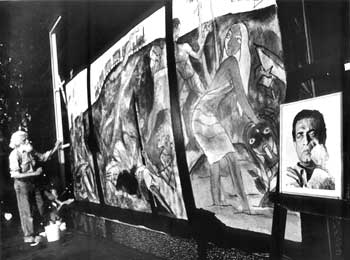 We have got used to thinking that the market alone creates art history; the greatness of artists is pegged at the astronomical sales figures they command. Yet, what supports such feats is the value attached to those works in the history of art.

True, art fairs are essentially commercial propositions. Even so, if they close their eyes to the rich markers of sensibilities contained in the works of artists like Husain, with an unarguable place in art history, they become institutions without a memory, mere art sales. In effect, art fairs lose an opportunity to gain the depth and broadness of vision to spot new contours and more energising times.

There are some ways of seeing, and showcasing, that are infinitely better than others.

Chitra Padmanabhan is a freelance journalist.