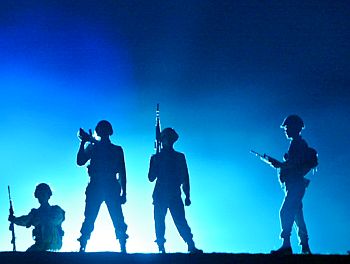 Image: Indian army soldiers take part in a light and sound performance as they re-enact a war with Pakistan during
Photographs: Fayaz Kabli/Reuters Anil Bhatt/PTI in Tololing, Kargil

Ten years after Captain Neikezhakuo Kenguriise sacrificed his life when he led a platoon to re-capture Tololing from Pakistani troops during the Kargil war, his family has come all the way from Nagaland to salute the place of their son's martyrdom.

"We have to come to see and salute the place of the martyrdom of our son. It was a dream for us to visit the holy place and pray for our son," the late captain's father Neiselie Kenguriise told a visiting PTI correspondent in Tololing on Saturday.

As they took a glimpse of Tololing ridgeline captured by their son and his platoon, tears welled in the eyes of Neiselie, his wife Dinuo and daughter.

Captain Neikezhakuo led his platoon to Tololing ridgeline overlooking an imporotant army formation, ejected Pakistani regulars and re-captured the ridgeline in a five-day-long battle. But he lost his life in mortar shelling on June 18, 1999.

Captain Neikezhakuo, who hailed from Kohima in Nagaland, was awarded Mahavir Chakra (MVC).

"My son did his duty to the nation with utmost dedication. We have come here to pay homage to him along with other martyrs, who defeated the enemy in one of the most difficult wars," the captain's parents said. 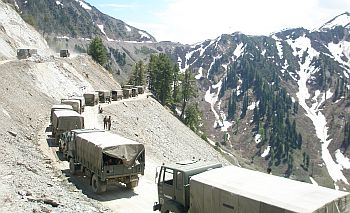 Image: A convoy of army trucks on its way to Kargil

Like Captain Neikezhakuo, another soldier Captain Manoj Pandey achieved martyrdom by beating back Pakistani troops and re-capturing Khalobar ridgeline, one of the most dominant positions captured by the Pakistani troops in Kargil sector. He died on July 3, 1999 in this sector.

"He is my hero as well as the nation's hero. He braved enemy fire and re-captured Khalobar ridgeline and pushed back Pakistani troops. He was given Param Vir Chakra (PVC) posthumously," his brother Manmohan Pandey, who had come to visit the memorial from Lucknow, said.

Flanked by his mother, Manmohan said, "I had come here to pray at the place where my brother sacrificed his life in the line of duty. This place is a temple for me".

"My father and mother have visited the memorial several times and it was my dream to visit the place," he said. 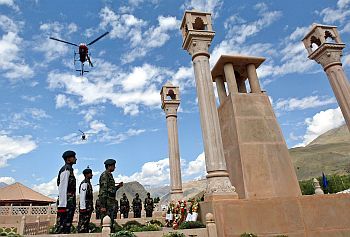 Praising his junior Captain Vikram Batra for his bravery in the battlefront in Drass sector where he laid down his life, Colonel Gurpreet Singh, Commanding Officer of 13 Jammu and Kashmir rifles said his unit won many awards.

"Our unit 13 JAK rifles achieved the title of brave among the bravest as it won two PVCs in Kargil battle", Col Singh, who was then Major and was directly looking after the battlefront in Drass, said.

Captain Batra and Lance Naik Sanjay Kumar had won PVCs for their gallantry and both belonged to 13 JAK rifles. As many as 533 jawans and army officers laid down their lives and 86 of them got PVCs, MVCs and VCs for the Kargil war.

The two-day 'Operation Vijay' celebrations from Saturday will mark the victory of Indian forces over their Pakistani army regulars ten years ago. All re-captured heights would be lit up during the celebrations.