Here's some news from outer space 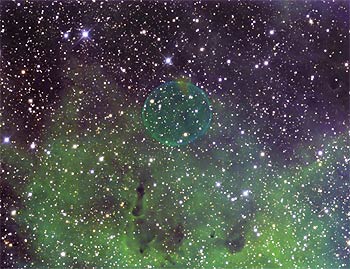 A team of astronomers has found a new planetary nebula, which looks like a giant 'soap bubble' floating in space.

Planetary nebulae, which got their name after being misidentified by early astronomers, are formed when an ageing star weighing up to eight times the mass of the sun ejects its outer layers as clouds of luminous gas.

Most are elliptical, double-lobed or cigar-shaped, evolving after stars eject gas from each pole.

According to a report in New Scientist, Dave Jurasevich of the Mount Wilson Observatory in California spotted the 'Cygnus Bubble' while recording images of the region on July 6. A few days later, amateur astronomers Mel Helm and Keith Quattrocchi also found it.

The bubble, which was officially named PN G75.5+1.7 last week, has been there a while.

A closer look at images from the second Palomar Sky Survey revealed it had the same size and brightness 16 years ago.

Captured: An eye in space 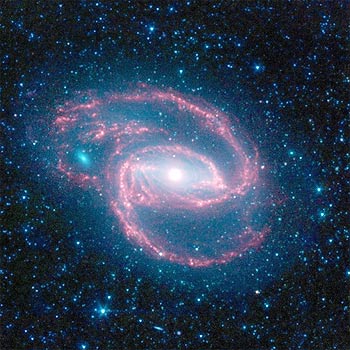 NASA's Spitzer Space Telescope has imaged a coiled galaxy with an eye-like object at its centre. The galaxy, called NGC 1097, is located 50 million light-years away. It is spiral-shaped like our Milky Way, with long, spindly arms of stars.

The "eye" at the centre of the galaxy is actually a monstrous black hole surrounded by a ring of stars.

The black hole is huge, about 100 million times the mass of our sun, and is feeding off gas and dust along with the occasional unlucky star. Our Milky Way's central black hole is tame by comparison, with a mass of a few million suns.

The ring around the black hole is bursting with new star formation. An inflow of material toward the central bar of the galaxy is causing the ring to light up with new stars.

"The ring itself is a fascinating object worthy of study because it is forming stars at a very high rate," said Kartik Sheth, an astronomer at NASA's Spitzer Science Centre.

In the Spitzer image, infrared light with shorter wavelengths is blue, while longer-wavelength light is red. The galaxy's red spiral arms and the swirling spokes seen between the arms show dust heated by newborn stars.

Striking gold with the moon 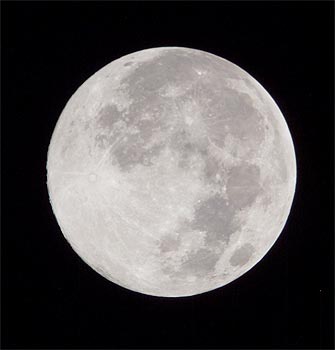 Image: A view of the Moon
Photographs: NASA

A couple who own MoonEstates, the only British franchise that selling plots of moon land, have revealed that their sales have doubled with the 40th anniversary of the lunar landings.

Sue and Francis Williams, who sell land on the Moon at 20 pounds per acre, say that takings have hit the 6million-pound mark. The pair received the rights to be deep space estate agents from Dennis Hope, an American who laid claim to every planet after exploiting a loophole in the US legal system.

Sue and Francis, who started selling moon plots six years ago, have sold 500 acres this month, twice the usual figure, making 10,000 pounds. MoonEstates has now sold around 300,000 acres, generating 6million pounds. However, 90 per cent of the amount goes to Hope's US franchise.

'We had a massive surge of extra orders due to the 40th anniversary. There has been so much talk of the landings and Neil Armstrong,' British tabloid The Sun quoted Francis, 56, of St Austell, Cornwall, as saying.

Sue, 55, added: "The credit crunch has helped because it's a nice fun present in a time of doom and gloom." According to Francis, plenty of the moon''s nine billion acres are still available.