A youth from near Mumbai has combined his knowledge of new media with an expertise in science to create an authentic, individual protest against man's destructive attitude toward the planet: a 25-minute environmentally-conscious film, titled The Brown Cloud, which he shot and edited on his cell-phone.

21-year-old Bhavesh Pandya, a resident of Vasai east (in Thane district, adjacent to Mumbai) and a recent science graduate from Mumbai's KC College, says he's been concerned about the environment for some time, and finally decided to take action late last year.

"I used to attend all these workshops and seminars about environmental issues. But I noticed that very few people would attend. And many of those who did attend would lose interest quickly, because the activities were so dull and boring."

That's when Pandya, who'd never shot a film or written a script before, began to envision The Brown Cloud.

"I really wanted to make a positive contribution to the environment," he says. "So I thought it would be smart to make a film that entertains while also spreading a message."

In order to keep the film exciting, Pandya eschewed the traditional documentary 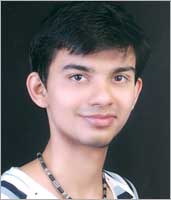 format and instead employed a narrative style. The Brown Cloud follows a young boy's journey to adulthood, and parallels his growing disillusionment with the deterioration of the environment, caused by an ever-growing brown cloud of pollution in the atmosphere.

Between writing, directing, acting and editing, the whole project took Bhavesh a full month to complete. He did some of the work during his Diwali break, and took study leave in April to finish the film. The film was shot in Vasai, South Mumbai and on the city's famed local trains. As he couldn't shoot and act simultaneously, he often had to rope in friends and family to help.

"My mom's been a big support," he says, with a laugh. "She was the financial sponsor. She didn't put too much pressure on me about my college. She was a big help."

Once he finished, Bhavesh used BlueTooth to transfer the film to the mobile phones of friends. He also made CDs of his films and began distributing them for free.

The response was enormous.

"I never wanted any publicity," he says. "But friends, relatives and teaches all told me that it's a very inspirational film. They told me that I'm a talented story-writer, director and actor. One of my teachers told me to enter the film in a competition. Several of my friends say they have been inspired to make individual changes in their day-to-day lives to conserve water and electricity."

And how does he feel about making a difference?

"It feels great. I set out to make an inspirational message and I believe that I have succeeded."

As for the future, what does it hold for Bhavesh?

"I'm interested in being an actor or director. And I definitely plan on making another film soon."