Farmers in Haryana face a dilemma

The monsoon shortfall has resulted in a drought-like situation emerging across northern India. Add to that a shortfall in electricity and what emerges is a perfect recipe for disaster for farmers.

Rediff.com's Krishnakumar P travels across such areas and assesses how farmers are coping with the dry spell this year.

Here are his first reports from Haryana.

The road from Kurukshetra town to its villages has many paddy fields.

While on a normal year, the fields would be full and lush green by July 10, this year the sight is a medley of fully-planted and half-planted fields. And then, there are fields that are not ploughed at all. That is what the lack of rains have done to the farmers.

Some had sown their entire fields and are now totally at the mercy of the rain god. Others have left some land unsown and are undecided about when to sow the remaining seedlings. Yet others have decided to wait till it rains, and then decide what to sow accordingly.

Amar Singh falls in the first category. He had sown paddy in all his nine acres. From the road, his fields look like any other: evenly spaced-out and knee-high paddy as far as you can see. As you walk into the field and as the ground comes in sight, the problem becomes evident. The ground resembles a hard, fast fifth day cricket pitch. The cracks are at least two fingers wide and god knows how deep.

"I had sown nine acres and have done everything that was within my control. Then it rained a bit three days ago and it gave us a bit of hope. But that did not last long as it hasn't rained after that," 65-year-old Singh said.

Most other farmers in the belt find themselves in a similar fix. They have transplanted the seedlings to almost 80 per cent of the fields and have done everything they can do but yet find themselves in a situation where they may soon have to destroy the crop and plant oil seeds and other such crops that do not depend so much on water.

"I planted them and tended to them to the best of my abilities. But two days ago, the transformer on my farm exploded and the Electricity Board has not repaired it since. Within three days, the cracks appeared and now there is nothing I can do about it," Singh said.

When cracks form in the field, it is a point of no return. "Even if there is abundant rain or I get 24 hours of electricity supply to pump water to the fields, the water won't stagnate due to the cracks," Singh said.

To top it all, of the nine acres, he owns only five. He had leased the remaining four at Rs Rs 26,000 each. "That comes to about one lakh rupees. Now my only hope is that it rains soon, so that at least the land will still be cultivable," he concludes.

"If it doesn't rain, I will have to burn the paddy" Haryana -- especially the Kurukshetra-Karnal belt, which is called the state's rice bowl -- has never faced such a situation in the recent past.

One of the major reasons could be their use of tube wells as the main irrigation while depending on rains for only support. While the fields were irrigated with regular flow of water pumped from the wells, the rainwater ensured that irrespective of the amount of rainfall, the water was left standing on the fields.

"This year not only has the monsoon played truant, the power situation is also not that great. Only because there is an election in a few months' time are we getting at least eight hours power supply," Vijay Sabharwal, who has 28 acres of land near Kurukshetra, said.

What might have also affected the farmers is that even this uninterrupted eight-hour supply has been only for the past few days.

"When the actual transplanting was happening, the electricity board was giving us about six hours a day on a rotation basis. So, in effect that meant, we sometimes had to do with just six hours of power supply in 48 hours before the next cycle started," Sabharwal said.

The last time the rice belt felt any difficulty was in 2002. "The previous year, the monsoons were exceptionally good. The next year, people rushed and sowed all their seedlings at the first excuse of rains. Then it did not rain for two and a half months. That was the toughest period we ever faced in the past decade. Even then, the farmers managed to maintain the crop thanks to good electricity supply," Amar Singh said.

This year, the farmers are in further dilemma. They have sown up to 90 to 95 per cent of their fields and have to now decide what to do with the remaining unsown land. "My seedlings have been in the nursery for about 45 days now. The ideal time to transplant them is between the 30th and the 40th day. But without rains, they will be wasted even if I plant them now," Sabharwal said.

The seedlings may still be planted before another two weeks, but agricultural experts say that the yield will be down by 15 to 20 per cent. "That is the least of my worries. I have not sown anything in about 10 acres of land. If it does not rain, I will plant Basmati in that," Sabharwal said. (Basmati can be planted as late as between July 31 and
August 15, and also does not require as much water as paddy does)

While the smart farmers like Sabharwal have some land left as contingency, others are completely at the mercy of rains. "If there is no rain in the next three days, I will have to burn the paddy and plant oil seeds or some other crop. I do not know how much I stand to lose on top of the money with which I had leased the extra four acres," Singh said. 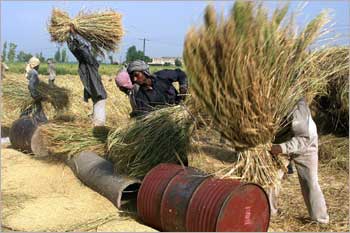 In effect, despite the farmer and the government claiming to have done everything that they can, it has all boiled down to the rains. Farmers have transplanted seedlings to 95 per cent of the total cultivable area in the region.

"Out of the available 1.15 lakh acres, the farmers have transplanted seedlings in 1.10 lakh acres," Surinder Pal Singh, the deputy director, agriculture, said.

"This region follows an early sowing cycle. So there was nothing that the farmers could have done," he added.

Asked about the area that is beyond redeem -- like Amar Singh's -- he conceded that this year at least 20 per cent of the land would be wasted.

"We also got reports that cracks have started appearing and the paddy has started to dry in a lot of areas. This will be about 20 per cent of the total area. There is nothing that can be done about that now," he said.

Like in Punjab, in Haryana too, the next hope is Basmati, oil seeds and other crops that would not consume as much water as paddy

The numbers: input costs have doubled 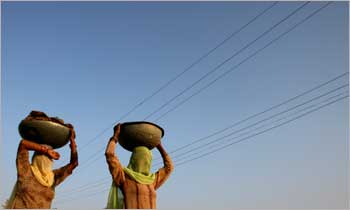 Farmers claim that the lack of rains, power and the scarcity of labour have almost doubled the input costs.

Here's the break-up per acre:

In a good year, one acre of paddy translates into 30 to 35 quintals of rice. The MSP for this is Rs 850/quintal now. While the farmers are demanding at least Rs 1200/quintal this year, sources said the government might increase the MSP to Rs 950.

While the farmers are demanding at least Rs 1200/quintal this year, sources said the government might increase the MSP to Rs 950.