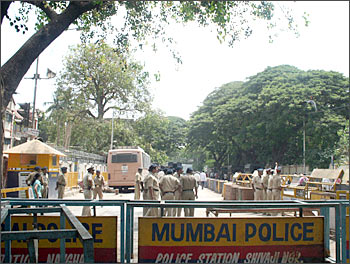 The second and concluding part of Sheela Bhatt's eyewitness account of one of the most talked-about trials in the country, that of Ajmal Kasab, lone surviving terrorist accused in the dreaded Mumbai terror attacks of 26/11.

Part I: Inside court-room and out, it's all about Kasab

Kasab keeps looking at the media during his trial. Journalist Ariz S Chandra says, "We don't see remorse on his face. Hansi mazaak aaj bhi karta hai (He still cracks jokes). Many times he tries to smile at us but when we don't reciprocate he looks the other way. Nikam has no doubt that  Kasab is a pucca badmash and he is pretending. His boyish looks, slim body, soft facial features and his frequent smiles are deceptive," he says.

Since the proceedings are long, media-persons stare at him during the trial. "We have to see how he reacts to court proceedings so we keep looking at him," says Chandra.

Every time an important witness comes up and accuses Kasab, all the journalists and even the judge and two lawyers turn around to check Kasab's reaction. Most times he gives the look of a bored man, but sometimes he is playful.

The judge and lawyers have said in court that Kasab has picked up a few words in Marathi and English and understands Hindi fairly well.

The police had seized Rs 4,580 from Kasab at the time of his arrest. He wants the judge to allow him to buy books with that money to kill time in solitary confinement.

Special Public Prosecutor Ujjwal Nikam once asked Kasab, "Now what is the use of reading books?" Advocate Kazmi will give him books in Urdu to Kasab since his money is now the property of the court, known as muddamaal.

In early June, police officer Prashant Murde appeared in the witness box to identify Kasab. When Kasab saw Murde he started laughing. Such behaviour is a bit outlandish and sometimes the judge asks him to behave himself. The judge is neither lenient nor strict with Kasab. He maintains a balance with his carrot and stick approach to everyone in court.

Judge Tahiliani was born in Gondia district of eastern Maharashtra, and earned his law degree from Nagpur. He is well-versed in Marathi, Hindi and English but the trial is largely conducted in Marathi and English.

When Vinod Masani, owner of the hijacked boat mv Kuber, which the terrorists used to land in Mumbai, came from Porbander, he would speak many words in Gujarati. The judge had no difficulty in understanding Gujarati. Every word spoken by the eye-witnesses, paanch witnesses and the experts statements in Hindi, Marathi, Gujarati or English is industriously and conscientiously entered in English by the court, as is the normal practice. The judge is punctual and manages the court's time well. He appears friendly but obviously he doesn't tolerate things beyond a limit.

Once, when Kazmi asked police officer Jadhav, who first checked the mv Kuber on November 27, "How did you enter the boat? Was there a staircase?" The judge told Kazmi, "You are unnecessarily wasting time."

On another occasion Kazmi asked Jadhav, "What was the colour inside the boat, was it deep yellow or yellow?" Jadhav said, "Will it do if I say medium yellow?"

Recently the judge took objection to Kazmi's remark that he was not being fair. Judge Tahiliani said, "You are alleging something very serious... I feel hurt. I am working hard on the case and sit late at night... I will not tolerate allegations." Kazmi apologised quickly.

Public prosecutor Nikam is a master in dealing with terrorism cases 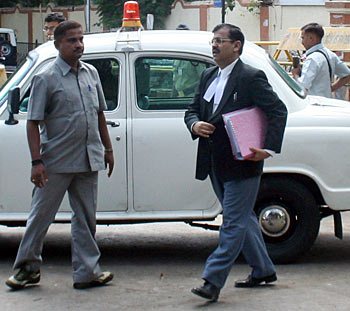 On the judge's right stands public prosecutor Nikam, a veteran lawyer who is a master in dealing with terrorism cases. He is so media savvy that there won't be any journalist in Mumbai's legal or crime beat who does not know him. Nikam's unique habit is that he comes to court with minimum papers and one never sees a crowd of legal assistants following him. He uses the police machinery, his own legal brain and the practical experience of smart police officers to fight his case.

Nikam is always confident and forceful. He has the knack of understanding legal complications that could land his case in trouble. To prevent it, he is quite aggressive in handling witnesses. However, his biggest strength in this case is that he has lined up 40 witnesses against Kasab. No prosecutor in the world can ask for more evidence.

On his opposite side stands Kazmi, a lawyer who seems lost by the overwhelming number of witnesses. After every argument he turns back and looks at the media-persons.

Kazmi is an emotional man and quite gentle in his personal interactions. He studies his case well and has confidence in his legal skills. During the evenings, he prepares strong arguments to defend Kasab the next day. Nikam many times objects to Kazmi's time-consuming arguments.

Since he is also an actor, his face is quite mobile and shows emotion quickly. He constantly tries to punch holes in the charge-sheet which, obviously, has small typos, weaknesses and some contradictions. Police officer Vinod Sawant of the LT Marg police station during his testimony said that when Kasab was arrested he was not conscious. This is contradictory to the charge-sheet and other versions. Nikam wanted to examine Sawant to clear the confusion, but Kazmi strongly objected. The judge agreed with Kazmi.

Most witnesses are emotionally charged except police officers and paanch witnesses who are well-tutored and experienced about their job.

'I have taken up the case as a patriotic Indian' 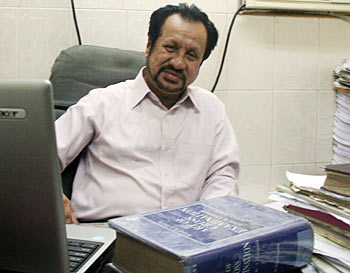 Nafeesa Qureshi, who lives in Bandra, was present at Mumbai's CST station when Kasab and his accomplice opened indiscriminate fire on commuters.

On November 26, 2008, Nafeesa was travelling to Aurangabad with her husband and daughter. When Kasab and Ismail attacked CST station, she was waiting in the concourse with her child, her husband having gone out to bring food. Qureshi said around 9.30 pm she suddenly heard an explosion and saw two persons firing in all directions.

"My daughter was hit in the back by bullets while I got bullet injuries on the left leg. In no time my daughter died and I fell unconscious," she said. She remained in a coma for three days.

Kazmi objected to the presence of her husband in the court saying it would prejudice her.

When asked by Kazmi if she identified Kasab due to police pressure, Qureshi said, "Main jhoot kyon bolungi? Agar aapki beti mari hoti toh aap aise hi poochte? Meri beti gayi hai, main jhoot kyon bolun?" (Why would I tell lies? If you would have lost your daughter, would you still have asked the same question? I have lost my daughter, why would I tell lies?)

Obviously, Kazmi's is a difficult job. Many times he doesn't cross-examine the witnesses but merely asks them if they are saying things under police pressure. And when the witness says no, the matter ends there.

Kazmi is under public scrutiny and that sometimes affects his confidence.

He told rediff.com that he has taken up the case as a patriotic Indian. "We are being watched by the entire world. We have to show the world that India is a just nation and the rule of law prevails here. We have given a fair trial to so-called terrorists. We should have the patience for it," he said in an interview.

Today, Kasab is a man without a future 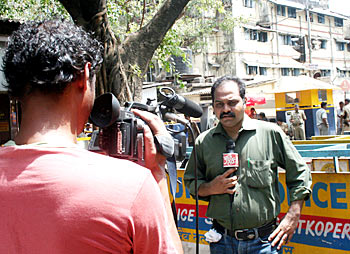 The police has lined up so many things against Kasab that there is no reason why one should not be patient.

Kasab's presence itself is evidence of his crime. Then there are hundreds of eye-witnesses. Plus, DNA and ballistic reports prove his involvement. The scientific analysis of the Global Positioning System found on mv Kuber will help prove that the gang of ten came from Pakistan.

The Mumbai serial blasts of March 12, 1993, killed 257 people and injured 713 others. It was tried under the Terrorist and Disruptive Activities (Prevention) Act, a special law that dealt with terrorism. But this time the Mumbai police and prosecutor Nikam are trying him on 86 charges, mainly under the Indian Penal Code and the Unlawful Activities Prevention Act.

Kasab is the most precious catch to establish the links of the conspirators behind the Mumbai attacks to the anti-India terror networks being nurtured inside Pakistan. Kasab's presence in an Indian court reminds one how vulnerable India's borders really are.

It is not the first time that a Pakistani is facing trial in India. But when one attends Kasab's trial one definitely experiences the dangerous religious-political ideology that pushed him to terrorism.

The prosecutor's resolve is quite evident. The anti-India forces hiding in Pakistan that sent Kasab to Mumbai with deadly weapons have miserably lost their plot.

Kasab's trial is the fitting non-violent response to them. The planned conspiracy was actually not so well-planned. Pakitan's weakness is being exposed in the court-room everyday. Kasab's presence in an Indian court conducting its business under Indian laws is a telling commentary on Pakistani society, politics and the country itself.

A first look at Kasab gives one a bit of a shock. One has seen footage in which he is carrying an AK-47 and his desperation to kill people. But, in the court-room one sees how jihadi terrorism brings death and despair and gives nothing in return to its believers. The AK-47 gave Kasab a false sense of power on that fateful night, and now he is not worthy of pity even.

Kasab is not just a face reminding one of terror; he reminds people of South Asia that the AK-47, religious fundamentalism or jihadi terrorism don't ensure your future. His wicked mentors have lost the plot against India.

Today, Kasab is a man without a future.