Kasab's name is enough to raise tempers in Mumbai 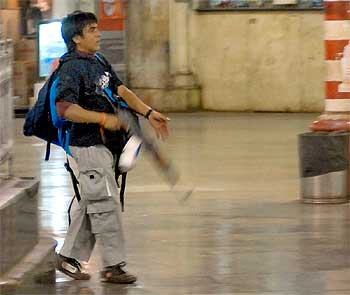 In Mumbai, Ajmal Amir Kasab is the face of terrorism and synonymous with the dastardly terror attacks on Mumbai last November, when 10 Pakistan-based terrorists, in one of the most audacious terror attacks in recent history, killed 166 and injured 234 others. Kasab was the only one arrested by the Mumbai police; his nine comrades in terror were killed in the counter-action by the police and paramilitary forces.

Here is an eyewitness account of the historical trial that is going on inside Arthur Road jail in Mumbai, filed before Monday's dramatic developments when Kasab confessed to his role in the terror attack. rediff.com presents a vivid account of the trial of the Pakistani terrorist under Indian laws whose diplomatic importance has not yet unfolded.

To Indians, Kasab represents all that is wrong with Pakistan. People think of terror when his photograph is published in the local dailies of Mumbai. Even if you utter Kasab's name, tempers run high in Mumbai.

Ariz S Chandra, principal correspondent of the television channel Aaj Tak, has been following the case against Kasab every single day since his arrest. Every morning, Chandra catches a local train from his home in suburban Andheri to attend what is now popularly known in Mumbai as the Kasab trial in the specially-constructed, bomb-proof court-room at Arthur Road jail. Sometimes, Chandra's office takes his audio bytes on the day's trial even as he is travelling in the local train. "People around me in the crowded compartment listen carefully when they hear me talking about Kasab or the developments in court. Then they ask me, 'Have you seen Kasab? How does he look? What do you think of the case?'" Ariz told rediff.com.

The commuters, invariably, find the case interesting and show tremendous curiosity but after a while people ask him in disgust, "Why do TV guys give him so much importance? There is no use of having a trial. Hang him quickly!"

Mustafa Plumber, another journalist who reports on the Kasab case regularly, says that irrespective of class or religion, in his neighbourhood of Bandra and among his friends and relatives, generally, people are impatient, sceptical but keenly observant about the Kasab case. The attack on Mumbai has changed something profoundly inside the hearts and minds of Mumbaikars, which will take time to assess.

Whoever sees Kasab for the first time in the courtroom gets a jolt. A flood of emotions clouds the mind. How one Pakistani has landed in the court of Special Judge M L Tahiliani is the story that is unfolding here. 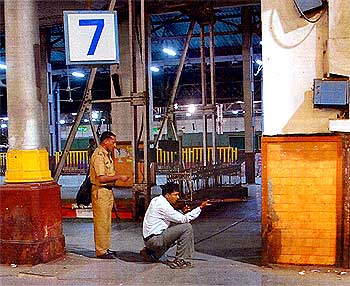 The prosecution had presented 312 charges against Kasab, the prime accused in the case, but the judge reduced it to 86 charges. Kasab has been charged with causing 72 deaths and injuries to many others. The Pakistani terrorist can get the death penalty or life imprisonment if the charge of waging war against India under section 121 of the Indian Penal Code is upheld by the court.

In the dock with Kasab are two Indians. Sabauddin Ahmed Sheikh and Fahim Ansari, as co-accused in the case. They also face serious charges of helping the conspirators. They allegedly helped Kasab's handlers in Pakistan get maps and photographs of Mumbai.

In court, the three accused sit next to each other on a wooden bench for some six hours everyday. Sometimes they exchange a few words among themselves. When the American Federal Bureau of Investigation questioned Ansari he reportedly told them that he got training from the Lashkar-e-Tayiba in Pakistan, including the 21-day Daura Aam (ordinary tour) basic combat course which was followed by a rigorous three-month advanced Daura Khaas (special tour) and later the Daura-e-Ribat (intelligence course).

The police also claim that Fahim conducted detailed reconnaissance of the locations with the help of information provided by Sabauddin. Fahim prepared the maps and handed them over to Sabauddin in Kathmandu, Nepal, some time in January 2008. Sheikh and Ansari have pleaded not guilty in the case.

This is a courtroom unlike any in India. Because here is a man who looks like a boy, who is likely to be proved to be a Pakistan-born terrorist, trained to kill Indians. We have all seen him in photographs and video footage with murder on his mind and an AK-47 in his hand. In court, the biggest surprise is to see that Kasab's spirit is unaffected despite his horrendous act. Actually, one should say alleged acts because this court is asking everyone to wait and watch patiently till the charges against him are legally proved. That is one demand some Mumbaikars find difficult to understand because our legal system is famous for delayed justice.

Kasab has been forsaken by his nation In Mumbai, Pakistan-born Kasab is to people what another Pakistani Ramzi Yousef, accused of planning the bombing of New York's World Trade Centre in 1993, meant for New Yorkers. To those who witnessed Kasab gunning down shell-shocked commuters at Chhatrapati Shivaji Terminus on November 26, 2008, he is the killer of 72 people, nothing more and nothing less. He is facing charges of murdering innocent men, women and children. In Mumbai, most people feel this well-trained terrorist deserves no sympathy, no trial under any law, and certainly no pardon. But, mercifully, the law does take it its own course in the land that Kasab and his mentors in Pakistan abhor.

Inside the 80-year-old Arthur Road jail, the trial has been going on without a summer break. Since Kasab's is a high-risk case it was deemed that it would be a security nightmare to take him everyday to a court in South Mumbai, so the court has been set up in the jail premises where he is lodged. At the time of filing this report more than 130 witnesses have been cross-examined since the trial started on April 15. It is a kind of record in a trial of such magnitude. Chandra, who records the court proceedings in his special diary, has already completed more than 250 pages of rough notes.

It is also unique in the sense that a Pakistani accused is sitting in an Indian court but no Pakistani has shown a readiness to meet him. A senior officer in the ministry of external affairs told rediff.com that the Indian government has written to the Pakistan high commissioner and allowed them to have counsellor access to Kasab but the Pakistan government is not meeting him. The senior officer says the Pakistan government is not taking Kasab's trial lightly. They are still waiting to form a final strategy. They would still like to prove somehow that he is not a Pakistani. They are looking out for loopholes in the prosecution's case. Even if they get a lame excuse they will turn around and declare that they don't know Kasab.

Kasab has been forsaken by his own country, family and by his mentors who poisoned his brain against India. No help, no calls nor any support is coming through across the border. Out of desperation, recently, he asked the judge if he can write a letter to Mecca. Probably he wants to write to Allah, claims his lawyer Abbas Kazmi.

The stakes are high for India 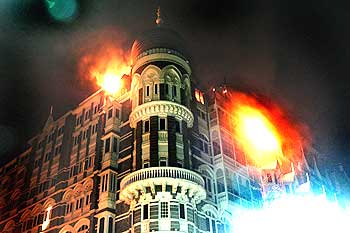 The case could become a diplomatic time bomb one day. The stakes for the Indian nation have rarely been so high while conducting the trial against a foreign national. Inside the court-room the sense of urgency is quite striking. Unlike most other trials, this sensitive case is conducted in a special court where the same faces assemble every morning at around 10.30 am and work furiously  till 4.30 pm with a 45-minute lunch break at 1.30 pm.

There is no need to say that security is so professional and so rigid that only sunlight and the humid breeze of the Arabian Sea are allowed to touch the walls of Kasab's cell. Kasab's solitary confinement inside the jail is covered by an iron wall from all sides and there is an embargo on writing about his security, the jail's and the court's security.

The site of the court and Kasab's room is such that it is likely to survive even a grenade attack, say sources in the Mumbai police. When Kasab enters the cour-troom all doors are closed. He is surrounded by security men even during the trial. In all more than 200 policemen guard him and the premises around him.

The court-room was specially created for the trial. One needs a special pass from the Mumbai police, which is given after a tough verification process, to cover the trial. The entire system of allowing the media, lawyers and witnesses inside the court premises is computerised and well-organised. The jail authorities, the Mumbai police and the Indo-Tibetan Border Police look after the entire security arrangements. Caesar and Prince, two well-trained police dogs, sniff every visitor. Furniture and fixtures are like those in any other court-room except that they are new and clean. The court is fully air-conditioned

The judge takes care of everybody and inquires about everything When I attended the trial, Ramesh Khokrale, senior reporter of Prahar, a local Marathi daily, warned me politely not to draw a map of the court-room in my diary. Khokrale also reports on the trial everyday along with some 10 regular reporters. Journalists like Chandra, Plumber, Khokrale, Vidya Mishra, Rajesh Shah and Nikunj Patel sit on wooden benches without even a back support. Behind them sit many security men. In front of the journalists are the six persons who are the centre of attention.

In the court-room the most respected figure is Special Judge M L Tahiliani. He has 20 years of experience and enough merit to handle this case. The big surprise about him is that he is not tight-lipped, reserved or an elite judge which one frequently witnesses in courts. He communicates quite well and frequently with prosecutor Ujjawal Nikam, the defense lawyer Abbas Kazmi, members of the media and the three accused.

For some strange reasons Ansari's lawyer remains absent on crucial days. The judge many times helps Ansari and Sheikh to understand the charges against them and their seriousness.  "Aap ko kuch apne bachav main kehna hai? Aap ki samajh mein aaya?" (Would like to say something in your defence? Did you understand everything?) he asks them gently. Ansari and Sheikh do not counter witnesses' statements against them. When Ansari's lawyer didn't appear on a crucial day, the judge asked his wife Yasmeen, "What's the matter?"

The conduct of the court seems to be transparent and candid. That is the strength that makes this trial interesting and adds a human touch. Yasmeen comes to the court daily. She wears a burkha all the time but her anxiety is visible through her eyes in spite of her covered face.  Yasmeen attentively listens to every argument. She doesn't share her feelings with the media but lawyers say she has faith in the court.

The same people attend the court everyday except the witnesses. The entry pass of the court is not given easily so the court looks like a close-knit assembly. The judge takes care of everybody and inquires about everything. When Plumber joined in reporting the trial after a short break, judge Tahiliani inquired about his absence. There is a discipline, regularity and consistency in the conduct of the trial.