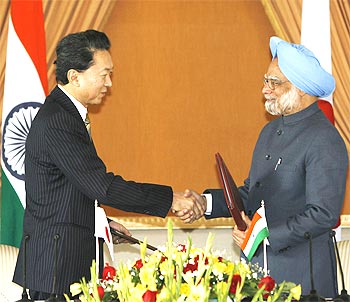 Pressed by Japan to sign the Comprehensive Test Ban Treaty, India clearly put the onus on the US and China on Tuesday for taking a lead in this direction by ratifying it.

Japan, however, promised to relax restrictions on hi-tech trade as the two countries sought to impart greater depth to their ties by unveiling an action plan covering defence and counter-terrorism exchanges and vowing to step up two-way trade.

After his wide-ranging talks with his Indian counterpart Manmohan Singh, Japanese Prime Minister Yukio Hatoyama remained non-committal on civil nuclear cooperation with India although he observed that it would be an "important agenda for future".

At a joint press conference with Singh after the talks, Hatoyama said the two countries have "differences" over the issue of CTBT and the Nuclear Non-Proliferation Treaty.

Noting that he had discussed the issue with Singh, he said, "I expressed the hope that along with the US and China, India will sign and ratify the treaty.

Hatoyama said, "In response, Prime Minister Singh said should the US and China ratify the CTBT, a new situation will emerge. I believe he has stated it as a matter of fact. We firmly have to engage in these endeavours." 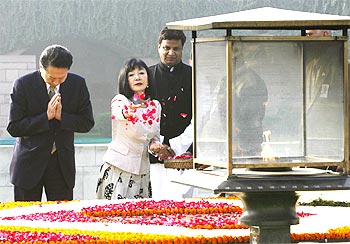 Hatoyama said he had also referred to Fissile Material Cut-off Treaty and contended that negotiations for that should be launched as soon as possible.

"Japan and India should cooperate for its early conclusion," he said, adding the suggestion was welcomed by Singh.

The Japanese prime minister added that his country continues to "seek cooperation from India" for "total elimination of nuclear weapons".

On his part, Singh said India is "deeply interested" in working with Japan and other likeminded countries to "promote the cause of universal, verifiable and non-discriminatory disarmament."

He said he "explained" to Hatoyama "the circumstances in which India had to go the nuclear weapon" way in 1998.

"I also mentioned India has unilaterally declared moratorium on conducting nuclear explosive testing and that is a commitment we will honour," Singh said, adding he had also pointed to India's "impeccable record" with regard to non-proliferation.

Noting that the two leaders had "fairly extensive" discussions on prospects of civil nuclear cooperation, Singh referred to the waiver given by the 45-nation Nuclear Suppliers Group to India to conduct trade in nuclear material and technology.

Asked about the prospects of civil nuclear cooperation between the two countries, Hatoyama did not respond. 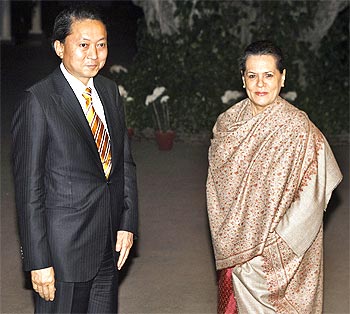 Earlier, in his opening statement, he said the issue of nuclear energy was discussed "because it is going to be an important agenda for future."

"We strive for the ultimate goal of elimination of nuclear weapons. We have been able to confirm that point," the Japanese prime minister said.

Singh said in his discussions with Hatoyama, the two sides undertook a comprehensive review of bilateral ties, as well as of major regional and international issues.

The two sides unveiled an action plan to advance the security cooperation, which provides for a framework for regular cabinet or senior official level dialogue.

The two sides also vowed to step up two-way trade, particularly considering that Japanese investment in India was less than that in China except for the last year.

In this regard, they emphasised the importance of early conclusion of negotiations for Comprehensive Economic Partnership Agreement.

"We have decided to expedite our negotiations on the Comprehensive Economic Partnership Agreement in order to conclude a high quality and balanced agreement. We are hopeful that this can be completed in time for the next Annual Summit meeting," Singh said. 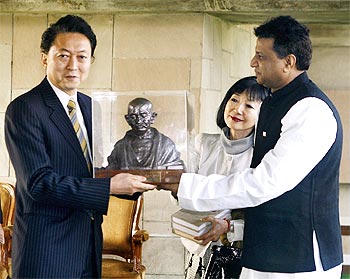 Agreeing with Singh on the need for firming up CEPA as soon as possible, Hatoyama said "main concerns" in the way of the pact need to be addressed to facilitate this.

A Joint Statement said the two leaders had instructed their relevant officials to accelerate the negotiations by "energetically working towards resolving the remaining issues with a view to concluding a mutually beneficial agreement at the earliest."

"The two prime ministers shared the view that economic relations between India and Japan would develop even further as a result of the conclusion of the EPA/CEPA," it said.

"I asked for cooperation in the procedure of visa issuance," he said, adding this is important considering that there were several major projects being undertaken in India for the benefit of both countries.

Singh said he had conveyed to Hatoyama that India welcomes Japanese investments into the country, and the growth of India's economy offers huge opportunities to substantially increase bilateral trade and economic cooperation.

In particular, there is great scope for expansion of cooperation in the areas of urban infrastructure, high technology, and renewable and energy efficient technologies, Singh noted.
More
© Copyright 2022 PTI. All rights reserved. Republication or redistribution of PTI content, including by framing or similar means, is expressly prohibited without the prior written consent.
Print this
article