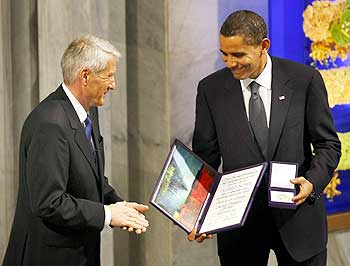 The Nobel committee awarded the peace prize to Obama for his "extraordinary efforts to strengthen international diplomacy and cooperation between peoples and cited his push for nuclear disarmament".

During his acceptance speech, Obama mentioned the controversy that erupted over the decision of the Nobel Prize Committee to award him the prize.

"I receive this honour with deep gratitude and great humility," he said. "It is an award that speaks to our highest aspirations -- that for all the cruelty and hardship of our world, we are not mere prisoners of fate. Our actions matter, and can bend history in the direction of justice.

'I am at the beginning, and not the end' 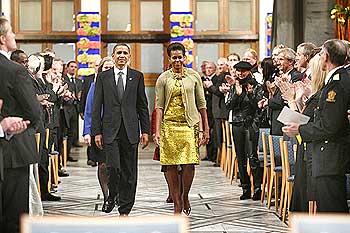 "And yet I would be remiss if I did not acknowledge the considerable controversy that your generous decision has generated. In part, this is because I am at the beginning, and not the end, of my labours on the world stage."

The US President reiterated that he was not in the same league as previous recipients including Nelson Mandela and Martin Luther King Junior.

He acknowledged that he was the Commander-in-chief of a country which was currently involved in two wars and he had sent thousands of troops to the warfields.

"Many of them have been killed. Many will be killed," said Obama, adding "The concept of a just war has rarely been observed in history."

However, he added that these were wars that the United States 'did not seek' and in which "40 nations have joined us".

'I cannot protect US based on Gandhian philosophy' 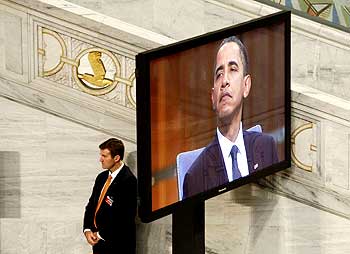 Citing the example of fighting the Third Reich or the Axis nations during World War 1 and World War 2, Obama observed, "I do not bring with me today a definitive solution to the problems of war. What I do know is that meeting these challenges will require the same vision, hard work, and persistence of those men and women who acted so boldly decades ago. And it will require us to think in new ways about the notions of just war and the imperatives of a just peace."

"Peace is a hollow promise if human rights are nor kept. I cannot protect US based on Gandhian philosophy," said Obama, who had mentioned Mahatma Gandhi as one of his inspirations during his election campaign.

"Those nations that break the rules must pay the price. I can use force unilaterally to defend America," said Obama.

He also mentioned that the Nuclear Non-Proliferation Treaty was the cornerstone of his foreign policy.

'I cannot stand idle in the face of threats' 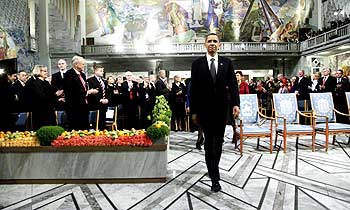 "As someone who stands here as a direct consequence of Dr King's life's work, I am living testimony to the moral force of non-violence. I know there is nothing weak, nothing passive, nothing naive, in the creed and lives of Gandhi and King," he said.

"But as a head of state sworn to protect and defend my nation, I cannot be guided by their examples alone. I face the world as it is, and cannot stand idle in the face of threats to the American people. For make no mistake: evil does exist in the world," said Obama in the strongly-worded speech.

"A non-violent movement could not have halted Hitler's armies. Negotiations cannot convince al Qaeda's leaders to lay down their arms. To say that force is sometimes necessary is not a call to cynicism -- it is a recognition of history; the imperfections of man and the limits of reason," he said.