After gunfire, car bomb goes off near Jama Masjid 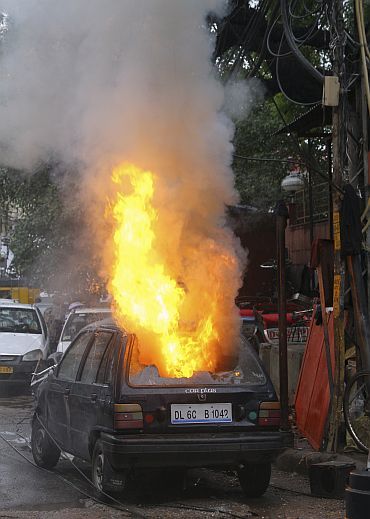 Just hours after an attack on a vehicle carrying foreign tourists outside the Jama Masjid in Delhi, a car went up in flames when a "crudely-circuited" pressure cooker bomb exploded metres away from the spot.

The incident took place at around two pm, some 50 metres away from Gate No 3 of Jama Masjid and near a police station where two men had earlier in the day fired at a visiting five-member Taiwanese media crew, injuring two of them.

"The car went up in flames due to a crudely-circuited pressure cooker bomb," a senior police official said.

Investigators suspect the involvement of a "group of disgruntled youth or local criminals" who wanted to create a scare in the area.

Asked whether terrorist groups like Indian Mujahideen could be behind the incident, Delhi Police spokesperson Rajan Bhagat said the pressure cooker bomb was "poorly circuited and crudely assembled".

"It appears to be a local gang or disgruntled youths," he said.

The car has been taken to Jama Masjid police station.

Two fire tenders were rushed to the spot, which doused the flames soon. Police had earlier said the fire erupted due to a cylinder blast.

There was some panic in the area as the incident came soon after the firing incident.

The site where the car caught fire is only 50 metres away from the spot where the firing took place.

Our people are bleeding and you will do: IM