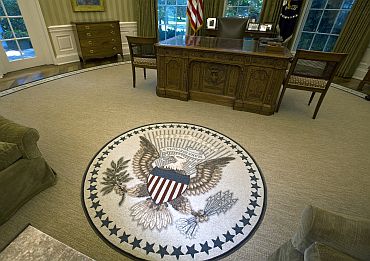 The White House has committed an embarrassing blunder over an Oval Office carpet quotation, which they thought belonged to Martin Luther King, but in fact, doesn't.

The original author is a now-forgotten 19th century activist Theodore Parker, a Boston preacher and campaigner against slavery, reports The Telegraph.

The new beige carpet contains the quote "The arc of the moral universe is long, but it bends toward justice," which Dr Martin Luther King often used in his speeches for black rights, which paved the way for the current White House occupant, to emerge as the first black leader of America.

However, Dr King never claimed he had come up with it as his own.

It too is woven into the rug.

Image: A new rug is part of the redecorated Oval Office of US President Barack Obama at the White House in Washington, DC    Photograph: Jonathan Ernst/Reuters