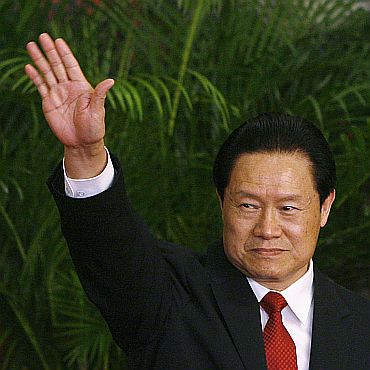 Amid a row between the two countries over issuance of stapled visas to Kashmiris, a top Chinese leader will make a three-day 'goodwill' visit to New Delhi to hold talks with the political leadership in India.

Zhou Yongkang, who ranks ninth in hierarchy of the ruling Communist Party of China, will leave for India on October 31 on a three-day visit.

"The visit is at the invitation of the Indian government," official Xinhua news agency quoted Li Jun, spokesman of the International Department of the Central Committee of the CPC, as saying.

Zhou, member of the Standing Committee of the Political Bureau of the CPC's Central Committee, is expected to meet leaders of Congress and other political parties during his India visit.

Indian and Chinese officials attach significance to the visit of Zhou, also the secretary of the CPC's influential Central Commission for Political and Legal Affairs, as this is the first high ranking visit by a Chinese leader to India after President Hu Jintao's 2006 visit.

Details of his complete programme were not available. The visit also comes amid a row between India and China over Beijing issuing visas to Kashmiris in loose sheets rather than in passports.

India has protested with China on the issue asking it to respect its sensitivities on Kashmir, but Chinese foreign ministry spokesman Ma Zhaoxu on Tuesday said Beijing was not rethinking its policy.

The practice of issuing stapled visas, which amounts to questioning Jammu and Kashmir's accession with India, was started by China about two years ago.

The spokesman's comments also came ahead of a scheduled meeting with Prime Minister Manmohan Singh and his Chinese counterpart Wen Jiabao in Hanoi on Friday.

Zhou's visit comes at the end of the Festivals of India and China celebrated this year in both the countries in connection with the 60th year of establishment of diplomatic ties. The Chinese Premier is also expected to visit India by the end of this year.

His visit is also taking place ahead of US President Barack Obama to India which is being watched with a degree of wariness in Beijing.

Source: PTI© Copyright 2022 PTI. All rights reserved. Republication or redistribution of PTI content, including by framing or similar means, is expressly prohibited without the prior written consent.
Related News: Communist Party of China, Zhou Yongkang, Festivals of India, International Department of the Central Committee, Standing Committee of the Political Bureau of the CPC
Print this article