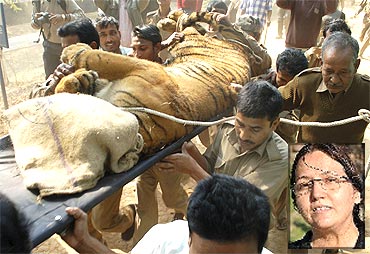 Jhurjhura, the majestic tigress of Bandhavgarh reserve in Madhya Pradesh, was killed on May 18 this year. After her cold-blooded murder by influential people from Madhya Pradesh's political world, six more tigers have been found dead. Killed in cold blood, notes social activist and tiger conservationist Shehla Masood.

The fashionable elite of New Delhi and New York was quick to show case its 'anguish'. Recording the deaths, writing articles, blogs and sharing its tears on Facebook and Twitter.

But the fact remains, nothing, absolutely nothing, has been done either by the state government or by the Union government to investigate into or to make the protection net stronger around the most royal creature god has created, which incidentally is also India's national animal.

Carcass located in 20 days. Judgment passed in one day 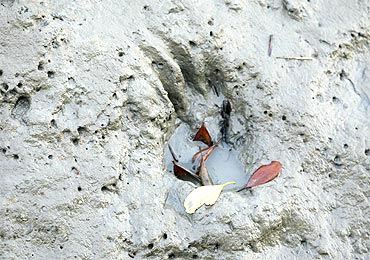 Image: A tiger's pug mark is seen on the fringes of a forest in Sunderbans
Photographs: Parth Sanyal/Reuters

Last night, when we were on our way to see what the state government has done to provide protection to the speechless creatures, another dead body of a tiger was found.

Many explanations would be given. Accidental death. Death due to fight over territory, and so on till the tiger dies and another explanation is published in a media obsessed with politicians.

If Madhya Pradesh, the so-called tiger state of India, is leading in tiger deaths, another neighbouring state, Rajasthan, is providing all facilities to have the tigers annihilated through the doors of a fake tourism policy. It seems all the humans have conspired against the tigers.

Look at the following facts.

The plunder of wildlife by caretakers in the Madhya Pradesh government is evident once again in Pench Tiger National Park. A half decomposed body; the carcass of a tigress was discovered on October 20, 2010, near the forest camp inside the protected tiger reserve.

The patrolling took 20-odd days to discover the body. The apathy, the unpardonable act, non-performance of the forest officers are evident from every angle. Despite the foul smell those people took 20 days to locate the body which was lying near the camp, and they took one day in passing judgment that the death was due to 'territorial fight.'

'She was not only killed, but also abused' 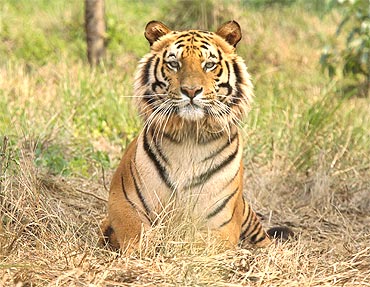 A murder occurs in the middle of the night in the most protected and guarded area. A mother of three is brutally hit five to six times before she succumbs to fatal injuries. She was left to the mercy of God, with her three cubs destitute and failing to understand why their mother is seething in pain. The mother, in the last hours of her life, breathed her last in a jungle that was supposed to be a protected place for her -- with huge paraphernalia of the State deputed to ensure her safety.

But not only was she killed with the active help of those 'protectors', she was abused after she died; her body was mishandled, her postmortem was done in full public gaze.

Bereft of their mother's love and protection, the three-month-old cubs had no choice but to be compulsorily surrender to the custody of caretakers, as the law enacted by the State ordained, ostensibly to ensure their safety.

It was like the 'safety' State appointed protectors provided to their mother, and a cub died just 70 days later under 'unknown' circumstances. It is unbearably heartrending to think the other two might have lost their lives too.

The murderers, known to all, are at large under the 'protective umbrella' of a State that vows to punish the culprits and safeguard the rights of those who can't speak. In actuality the guilty gets the protective shield, thanks to corruption enveloping the State apparatus.

The best that a State can do in these circumstances is to institute an enquiry.

'Nothing was done to book the culprits' 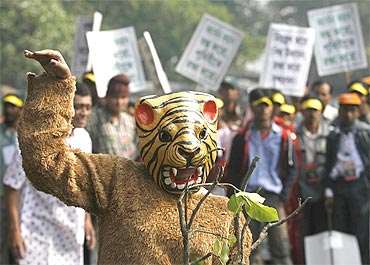 This is the tragic case of Jhurjhuria, the majestic tigress of Bandhvagarh, famously loved by conservationists, photographers and noble-hearted tourists from all over the world. She was killed, and her cubs died later.

Nothing, absolutely nothing, was done to book the culprits and punish the state employees responsible for her murder and the spine chilling way her postmortem was done, followed by the scheming carelessness resulting in the death of her cubs.

The forest department's opposition to the execution of the Scheduled Tribes and other Traditional Forest Dwellers (Recognition of Forest Rights) Act is no secret. Well-paid employment to tribals in critical areas is seen on paper. But no upliftment in reality.

'Mafia is hand-in-glove with forest officials' 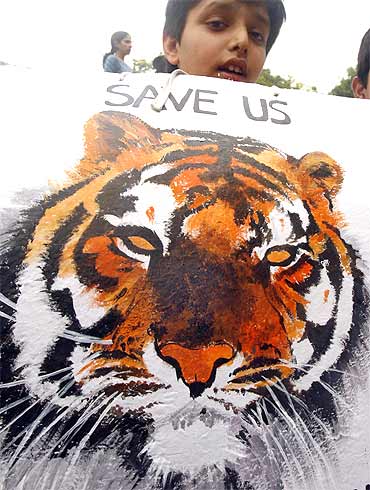 On the contrary, forest officials constantly harass them. The old policy of relinquishing valuable forests for permanent cultivation was discontinued after consideration to ensure a balanced use of land.

Conservation of wildlife was to be regularised. The tribals were to be weaned away from shifting cultivation. But the concept of "national interest" has been applied in a narrow sense.

A welfare State cannot have a basic contradiction between local and national interests. The government's various development programmes and the tribal welfare schemes have by and large failed to make any dent in the deteriorating condition of the forests and forest-dwellers. The crux of the problem lies in misdirected policy and its half-hearted implementation. The attitude of the forest department is one of callousness, indifference and neglect toward tribals.

A lethal pesticide which kills tigers within 50 yards of the contaminated carcass is easily available around the Panna tiger reserve. Having lost the Panna genes has not upset them as yet. Shunted in the name of compensation, they are losing their home and livelihood, and their children have no future There is no political will to help.

Timber mafia is hand in glove with the officials. Intensive forest management is missing -- such as fire management, handling invasive species, pests and diseases. More than 80 per cent of tourism in Madhya Pradesh is centered on nature and wildlife. The State has the largest forest cover (94,669 sq km) in the country of which more than 10,000 sq km is under protected areas, national parks and sanctuaries.

Besides, it is also home to several rare, endangered and threatened species. Local communities, tourists, government and the private sector are abusing natural wealth in the name of eco-friendly activities like nature trails, safaris, adventure sports, camping and bird-watching among others to woo the tourists.

Instead of the latest equipment, lathis are being used, unequipped guards do not get salary on time, money is spent on buying vehicles, health of the tigers are on the mercy of one medical practitioner, research and training is a distant dream. This attitudinal indifference to tiger conservation has been witnessed repeatedly. As if pushing for the NH-7 wasn't bad enough, the Madhya Pradesh government is advocating a high-end private resort that would cut through a tiger habitat.

Conferences and money cannot save the tiger 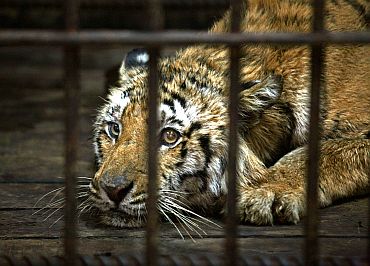 Image: A tiger in a Kolkata zoo
Photographs: Jayanta Shaw/Reuters

The chief wildlife warden is reinstated at the behest of the chief secretary whose name appears in the commission reports as responsible for the Panna genocide; their intentions are evident from the latest scheme.

"Patrolling tiger land" now being asked to stop by the central government after the protest by wildlife lovers and conservationists as it violates the wildlife act and Supreme Court orders.

Strict regulation of tourism within the core areas of tiger reserve as per the Project Tiger advisors is lacking. Action is awaited as per the Environment Protection Act 1986 on commercial activities in the area peripheral to the core of the tiger reserves to ensure corridor value. Slow progress of village relocation from core areas is witnessed. Action is awaited in constituting a special Tiger Protection Force.

This is a matter of immense anxiety for all and sundry. The existence of tigers and forest is interconnected. Ultimately, the forest is the dwelling of tigers. But the State is destroying the tiger's habitat without giving a thought to what havoc it will bring to the mute animals.

Doesn't this amount to sponsoring of murder of tigers by the State?

Conferences and money cannot save the tiger. Lack of humanity is killing them. It is only a matter of time before some other tiger will die, without anyone taking any action, because tigers do not constitute a vote bank.